Brent crude oil futures rose above $70 a barrel for the first time since January of last year, after a key Saudi oil site came under attack on Sunday. Iranian-backed Houthi rebels in Yemen claimed the assault on the Ras Tanura export terminal, which has a capacity matching nearly 7% of global demand, using missiles and bomb-laden drones. While such assaults rarely result in extensive damage, their frequency has created unease in the Gulf, roiling oil and shipping markets. Crude oil prices were already boosted by OPEC and allies' surprise decision to keep output unchanged last week.

It's day one of Britain's exit schedule from the country's third lockdown. Schools are to reopen and outdoor meetings with one person from another household will be allowed again. The U.K. is also expanding its vaccination program in a signal that it’s on track to meet its targets in fighting the pandemic. About 1.7 million people aged 56 to 59 are being invited to book an inoculation, the National Health Service said on Sunday. In other encouraging news, Italian researchers are testing a single-shot Covid treatment they say is 80 times more potent than the infusions given to Donald Trump during his hospital stay last year. They hope to gain approval as early as this summer.

A sophisticated attack on Microsoft’s widely used business email software is morphing into a global cybersecurity crisis, as hackers race to infect as many victims as possible before companies can secure their computer systems. The attack, which Microsoft has said started with a Chinese government-backed hacking group, has so far claimed at least 60,000 known victims globally, according to a former senior U.S. official with knowledge of the investigation. The attacks were so successful — and so rapid — that the hackers appear to have found a way to automate the process. The use of automation to launch very sophisticated attacks may mark a new, frightening era in cybersecurity, one that could overwhelm the limited resources of defenders, several experts said.

President Joe Biden is on the cusp of his first legislative win with the House ready to give final passage to his $1.9 trillion Covid-19 relief plan, the second-biggest economic stimulus in U.S. history. After the Senate passed the legislation on a party-line 50-49 vote on Saturday, House Majority Leader Steny Hoyer said it will be taken up in his chamber on Tuesday. Although some liberal House members have complained about changes made by the Senate to ensure the support of moderate Democrats, progressives brushed off the concessions as minor.

European stock futures point to a positive open. UBS returns to Paris today for a three-week court appeal of a $5.4 billion fine, which a judge slapped on it just over two years ago for helping French clients avoid taxes. It's a relatively quiet morning on the earnings front, with publisher Pearson, insurer Direct Line and shipbroker Clarkson due. German industrial production data for January is expected to show a monthly decline, the first since last April, after a global chip shortage throttled car production by about 25%.

Bond bearishness hit a record level last week as investors piled into short bets on Treasuries. An aggregate gauge of the change in net non-commercial positions across the Treasuries futures curve dropped by the most on record, according to the latest Commodity Futures Trading Commission data. The change was equivalent to $45 billion in benchmark Treasuries net short positions, according to TD Securities strategist Penglu Zhao. Benchmark 10-year yields touched 1.62% Friday — the highest since February 2020 — before pulling back somewhat. Bearish traders became emboldened after Federal Reserve Chairman Jerome Powell underwhelmed investors by refraining from pushing back more forcefully against the recent yield rise. And with the House ready to give final passage to President Joe Biden's $1.9 trillion Covid-19 relief plan — the second-biggest economic stimulus in U.S. history — the path of least resistance looks set to be yields pushing higher. 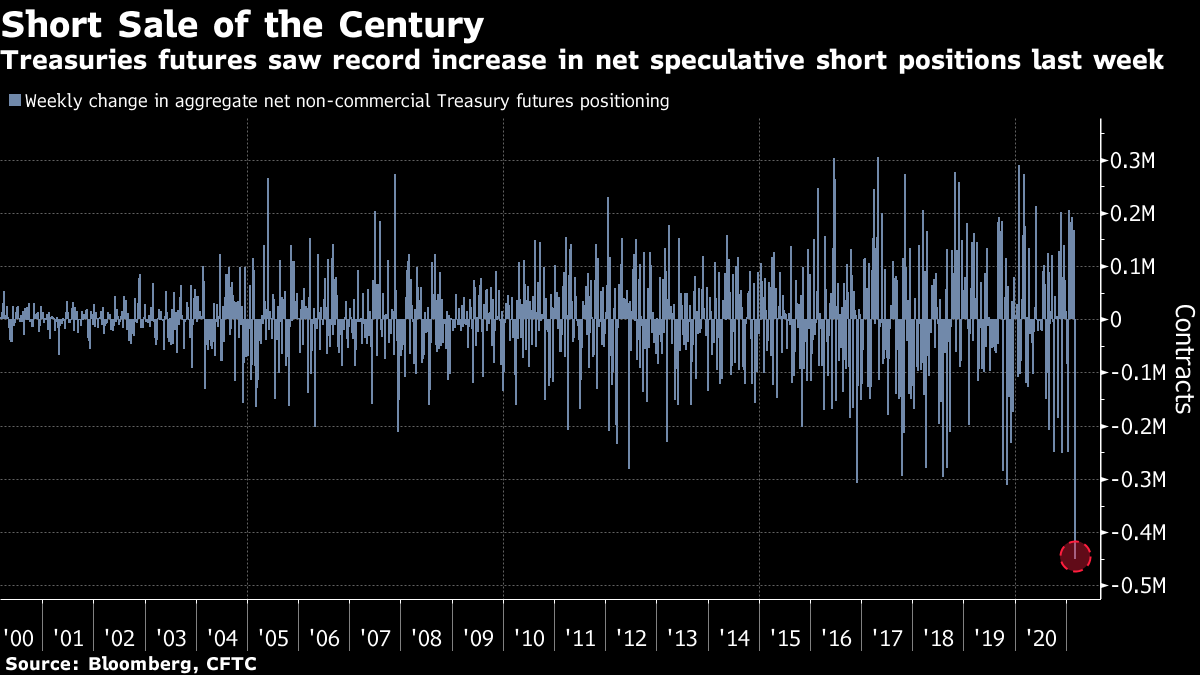