Good morning. Russia's vaccine is coming to Europe, Biden's relief bill is about to reach the House, and it's a busy earnings morning. Here’s what’s moving markets.

Russia's Sputnik V vaccine, already under rolling review by the European Medicines Agency, may be produced in Western Europe by summer. Swiss biopharmaceutical company Adienne Pharma & Biotech signed an agreement with Russia's sovereign wealth fund RDIF to produce the shot in the Milan region, pending a nod from Italian regulators. Russia's vaccine started to gain broader international recognition since February, when The Lancet medical journal published peer-reviewed results of interim trials showing 91.6% efficacy. The deal comes as Prime Minister Mario Draghi pledged to speed up Italy’s fledgling vaccination campaign amid a new rise in infections from the disease that’s already claimed 100,000 victims in the country. Also under fire for its slow vaccination progress, Germany's government said it will drastically speed up its campaign and aims to get shots to as many as 10 million people a week from the end of March.

President Joe Biden’s $1.9 trillion package is poised to sail through the House when it takes up the bill as soon as today, according to Democratic lawmakers and aides, even after proposals progressives championed were scaled back. The Senate’s changes to the House-passed bill, made to appease moderates and comply with parliamentary rules, included dropping a proposed minimum wage increase but are unlikely to prove enough to make progressive Democrats vote against it. House Speaker Nancy Pelosi can only afford to have four Democrats oppose a bill for it to pass, if all members are voting and Republicans are lined up in opposition, given her party’s thin majority. The final vote on the bill in the House could potentially slip to Wednesday, due purely to logistics, according to a Democratic aide.

Greensill Capital filed for administration in the U.K., capping a stunning collapse for the supply-chain finance company after key backers walked away over concerns about the valuation of its assets. Lex Greensill’s eponymous company had been readying the filing since last week, after Credit Suisse froze and then later started winding down $10 billion of funds that bought products from Greensill. That decision set off a chain of events that also saw regulators in Germany shut down its local bank. In a court filing on Monday, Greensill also said that its largest customer by value, Sanjeev Gupta’s steel and aluminum empire GFG, has fallen into “severe financial difficulty.”

GameStop mania was reignited on Monday after the video-game retailer tapped Chewy founder and activist investor Ryan Cohen to helm its e-commerce business shift. The stock surged 41% to $194.50, the highest in five weeks and in its fourth consecutive day of gains. Some other recently-punished assets recovered overnight, with Nasdaq futures pointing higher following yesterday's 3% correction amid a global rotation into value stocks. China's CSI 300 benchmark erased yesterday's loss as people familiar with the matter told Bloomberg that China's so-called “national team'' of state-backed funds were stepping in to ensure stability during this year's National People's Congress. Lastly, Bitcoin surged to a two-week high of $54,000 this morning, helped by more signs of institutional interest in the cryptocurrency.

European stock futures are fluctuating between gains and losses. Today's earnings include tire and car parts maker Continental, which already warned of negative net income when it suspended its dividend last month. Logistics giant and DHL parent Deutsche Post is also due, though it already spilled some of the excitement when it announced a buyback yesterday. The U.K. morning rush promises earnings from asset manager Standard Life Aberdeen, broadcaster ITV and defense electronics firm Ultra. Later today, Italian shoe maker Salvatore Ferragamo and weaponry maker Leonardo are due.

Global stocks are on the verge of breaking down from their year-long uptrend and the newfound enthusiasm for value shares may not be able to stop them. The MSCI AC World Index has fallen almost 5% from its mid-February all-time high amid a global rotation out of once-popular growth shares into their cheaper counterparts. The recent surge in bond yields has accelerated the move as investors bail out of stocks trading at elevated valuations and look to less expensive names more exposed to a cyclical upturn. The issue is there’s still a $9 trillion gap between the value of three key high-priced sectors — technology, commercial services and consumer discretionary — and that of three popular value peers: energy, financials and industrials. That means the cheaper stocks have to perform disproportionately better to drive an overall rally in the benchmark, as even a modest selloff in the growth names — which include sector leaders Apple Inc., Alphabet Inc. and Amazon.com Inc. — quickly weighs. While an equal-weighted basket of the three cheaper sectors has climbed 4% since mid-February, an equivalent gauge of the three expensive sectors has slumped almost 9%. 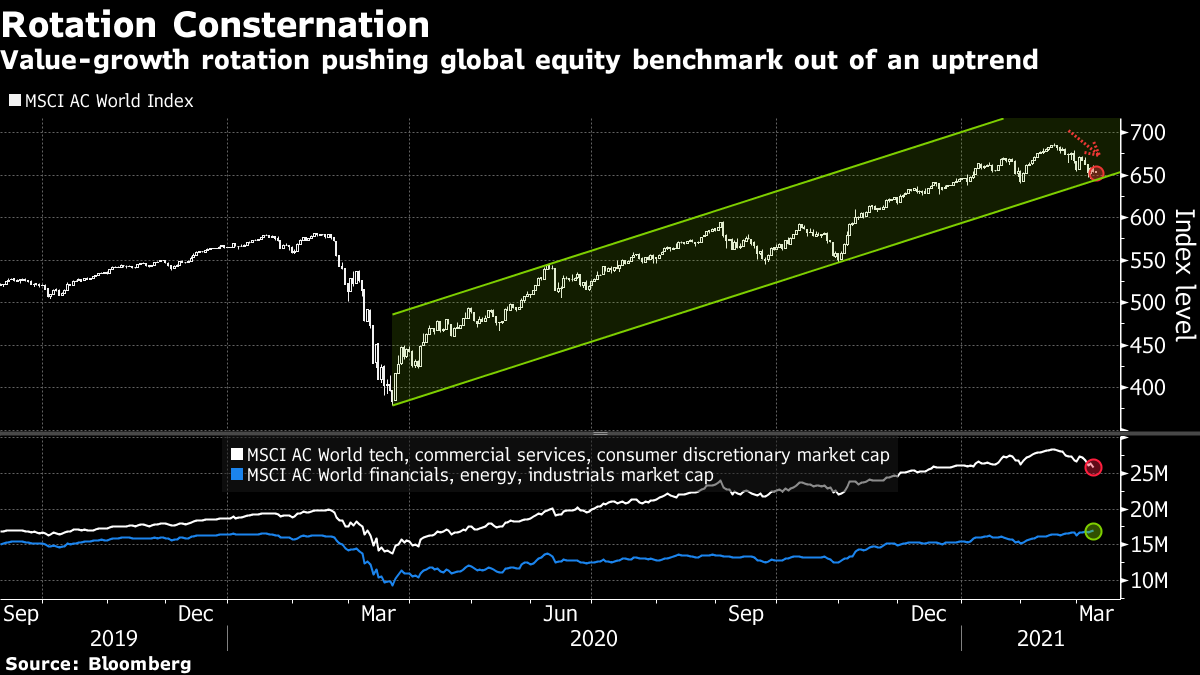