The European Medicines Agency is expected to issue a positive opinion about Johnson & Johnson's single-dose coronavirus vaccine today, followed by a swift approval at the European Commission. Results from late-stage trials published in January found that it prevented 66% of moderate to severe cases of Covid-19. The EU has secured 200 million doses, with an option for a further 200 million, although supplies aren't expected to arrive until the second quarter. Yesterday, U.S. President Joe Biden doubled the country's order for the vaccine to 200 million, aiming to build a stockpile larger than the U.S. population as a backup in case of new variants.

It's ECB Day! No changes to rates or the scope of bond purchases are expected; instead, officials' views about rising bond yields will be in focus. They are about to decide whether rising borrowing costs are such a threat to the region’s virus-stricken economy that they need to come up with a stronger response. The region's economy may not be ready to cope with higher borrowing costs, lagging far behind the U.S., where a faster vaccine rollout and $1.9 trillion fiscal stimulus package are turbocharging a rebound. Economic forecasts President Christine Lagarde will present after the rate decision are likely to justify the current stimulus program with a cautious view that envisages no sustained jump in inflation, according to officials with knowledge of the matter.

U.S. President Joe Biden’s $1.9 trillion Covid-19 relief bill cleared its final congressional hurdle late yesterday, with the House passing the bill on a 220-to-211 vote, sending it to the president for his signature. The vote caps a nearly two-month sprint from the time Biden first unveiled his American Rescue Plan, through tough negotiations in the Senate to its final approval largely in the form it was first proposed. Biden plans to sign the legislation tomorrow. Meanwhile, Biden's pick for Treasury undersecretary Nellie Liang has quietly started work to strengthen Wall Street regulation ahead of her formal nomination for the post, according to people familiar with the matter.

Former Credit Suisse bankers who blew the whistle on their employer for helping wealthy Americans dodge taxes are now urging U.S. authorities to punish the bank beyond the $2.6 billion it paid as part of a guilty plea seven years ago. “With a new Justice Department, there is hope that Credit Suisse will finally be held accountable,” attorney Jeffrey Neiman said yesterday. On the same day, the bank announced an internal probe into the collapse of a $10 billion group of supply chain finance funds and temporarily replaced three employees in its asset management unit who were tied to the strategy.

Watch software stocks including SAP after U.S. peer Oracle slumped in overnight trading, following disappointing fourth-quarter growth guidance. Some early-morning earnings highlights are Hugo Boss and insurer Generali. In the U.K., get ready for advertiser WPP, jet engine maker Rolls-Royce and grocer WM Morrison. Other than the ECB rate decision and a possible European approval of the Johnson & Johnson vaccine, today's macro highlights include U.S. jobless claims in the afternoon, expected to show a slight decline from last week.

As yesterday's lackluster performance showed, the Nasdaq 100 is not out of the woods yet after falling out of its uptrend. The tech-heavy gauge still has some work to do before a dead-cat bounce can be definitively ruled out. The index rebounded precisely from the first Fibonacci retracement level it encountered after a break from the year-long rally, something which will please adherents of technical analysis. But a failure to rise back above its uptrend soon could point the way to further downside and another test of the support level. The narrative has shifted against high-priced growth stocks and that's likely to continue as long as the economic opening proceeds apace. Wednesday's Nasdaq recovery was largely driven by hedge funds who were forced to pare their bearish bets to limit losses — rather than genuine interest, according to market participants. Tech stocks remain vulnerable. 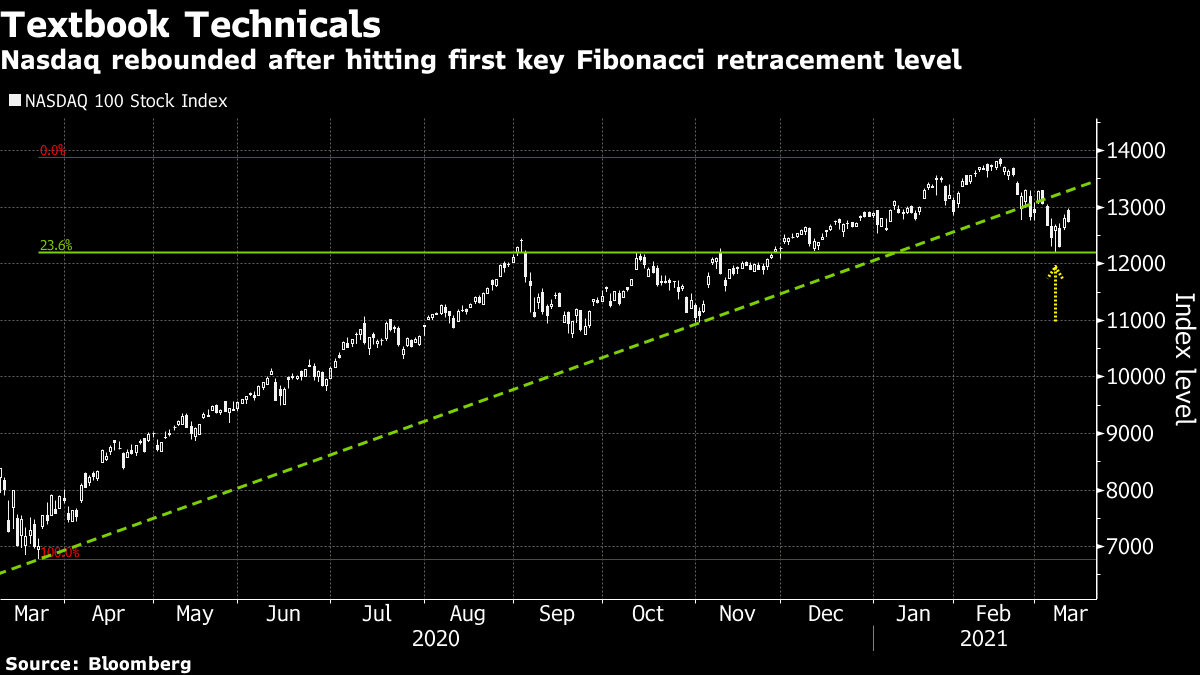