Europe's trouble at getting its hands on enough vaccines shows no sign of abating, after projections obtained by Bloomberg indicated that AstraZeneca will deliver less than half as many doses as planned in the second quarter. The shot is already a point of contention after Italy, Norway, Denmark and Iceland suspended its use, pending an investigation into a possible link to blood clots. The U.K. government retorted that the vaccine is safe and effective, and Iceland's chief epidemiologist expects it to be cleared again in a few days. Meanwhile Johnson & Johnson said that it would aim to bring its vaccine to Europe in the second half of April, rather than in early April as EU leaders had hoped. The one-shot vaccine won European approval yesterday and is expected to play an important role in Europe's vaccination effort due to its ease of transport and storage.

In a sign that the Biden administration will move forward on technology export controls and the tough-on-China stance championed by his predecessor, the U.S. tightened restrictions on selling 5G-related goods to Huawei. The ban is effective as of this week, according to people familiar with the matter. The rules create a more explicit prohibition on the export of components like semiconductors, antennas and batteries for Huawei 5G devices, making the ban more uniform among licensees. Some companies had previously received licenses that allowed them to keep shipping components to Huawei that the Chinese company may have then used in 5G equipment, while other companies were already subject to tighter restrictions.

The U.K.’s decision to postpone border checks on goods coming from the European Union until next year has delighted the country’s importers — but left some exporters angry. Britain’s one-sided Brexit border is coming under increasing criticism from industry, with business figures saying it gives EU firms a leg up over U.K.-based exporters, which have had to grapple with the full range of EU customs controls since Jan. 1. January trade balance data due this morning will cast a first light at the effects of Britain's departure from Europe's single market.

The CEO of Japan's Renesas warned that a global shortage of auto semiconductors may persist into the second half, joining other industry leaders in bracing for a chip crunch to snarl production of cars and gadgets well past the summer. Industry giants from Continental to Innolux have in recent weeks warned of longer-than anticipated deficits thanks to unprecedented Covid-era demand for everything from cars to game consoles and smartphones. The supply disruption is bad news for Europe's car makers, throttling assembly lines just as an accelerating shift to electric vehicles makes imported battery and semiconductor materials crucial.

European stock futures are little changed after U.S. shares reached a record. Earnings are out from Ray Ban and Oakley owner EssilorLuxottica, which beat profit estimates and forecast a return to normal for its business this year. Next up is Deutsche Bank's annual report, where 2021 guidance will be in focus after the Frankfurt-based lender's stock outperformed European peers throughout the pandemic. Results are also due from utility Fortum, broadcaster RTL and grocer Dino Polska. British trade figures for January will cast a first light at the effects of leaving Europe's single market, while industrial output data is expected to show a sharp decline.

You don’t have to believe the Fed will slow the pace of monetary support by the end of next year, but with the U.S. economy set to grow at its fastest since 1984, you should be ready for the consequences if they discuss it. Markets remain ripe for turmoil when you look back to the last time Fed officials faced the conundrum of how to take their foot off the monetary gas. The 2013 tantrum saw traders in just one month rush to price in three more rate hikes for the coming 2 years or so after then-Fed Chair Ben Bernanke’s taper comments – based on the shift in the spread between Eurodollar contracts. In less than four months, they were expecting almost six hikes. Today, with a turbocharged U.S. economy expected to grow 5.5% this year and inflation expectations at the highest in over a decade, traders see the potential for just one hike over the same time horizon. In the month after Bernanke spoke the Nasdaq 100 fell 4%, the MSCI Emerging Markets Index 14% and 10-year Treasury yields jumped 50 basis points. Back then the tech gauge was trading on just 15 times forward earnings, compared to 27 times now, and the U.S. bond benchmark was already at 2%. My point is to illustrate how quickly market expectations can shift and the impact that alone can have. A bit like the old Hemingway line on going bankrupt — “Two ways. Gradually, then suddenly'' — traders know a taper is coming, but they aren’t prepared for the speed of the market reaction when it does. 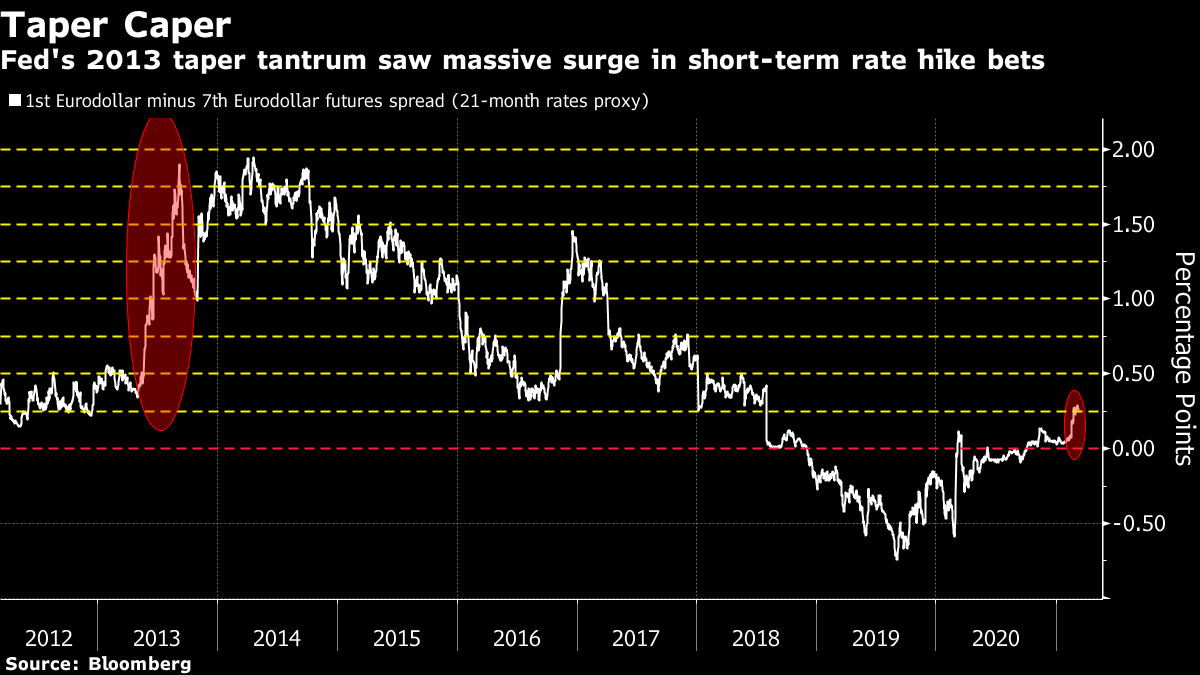