Cryptocurrency exchange Coinbase Global soared above a $112 billion valuation in its Nasdaq trading debut Wednesday, then slipped back below its opening price as Bitcoin fell from record highs and tech stocks fell across the board. The massive valuation dwarfs more traditional financial firms — including Nasdaq itself. Coinbase shares closed at $328.28, down 14% from the opening price after earlier climbing as high as $429.54. For some employees, the startup has brought a lightning fast rise to vast wealth. Former Google executive Surojit Chatterjee joined 15 months ago, a move worth more than $700 million.

The Federal Reserve will likely taper off its bond purchases before considering raising interest rates, Chair Jerome Powell said. “We will reach the time at which we will taper asset purchases when we’ve made substantial further progress toward our goals from last December, when we announced that guidance,” Powell said Wednesday. “That would in all likelihood be before — well before — the time we consider raising interest rates.” Policy makers will wait until inflation has reached 2% sustainably and the labor-market recovery is complete before considering lifting rates, and the combination is unlikely to happen before 2022, he said. Their forecasts last month signaled rates being held near zero through 2023.

Access to clean water is a potentially dire global challenge. Fortunately, a shift to a more sustainable model is possible.
Learn more about the forces key to this transition, and why we believe it represents a compelling sustainably-themed investment opportunity.

Asian equities look set to retreat after U.S. stocks closed off all-time peaks as a drop in Coinbase and technology shares overshadowed strong bank earnings. Futures dipped in Hong Kong and Australia and were steady in Japan. Treasuries slipped in U.S. trade and the dollar extended losses into a third session. Bitcoin touched a record of $64,870 before easing. Oil jumped above $63 a barrel as shrinking crude stockpiles in the U.S. supported hopes for a global demand recovery.

Wall Street traders just showed the Reddit crowd how it's done, with big banks tallying surprisingly massive hauls for the quarter. Goldman Sachs earned more from trading in the first three months of the year than it had in any quarter in the past decade, while JPMorgan saw such revenue climb 25%. The boon was thanks in part to the day-trading crowd who tried to stage an investment revolution in January, organizing on forums such as Reddit to drive up GameStop and other so-called meme stocks. Special purpose acquisition companies, or SPACs, also helped boost revenue from equity underwriting.

The future of batteries is — quite possibly — just a slender sheet of material that’s supple enough to bend between two fingers. But no one outside of one Silicon Valley startup is allowed to know what it’s made of. The battery leap claimed by Jagdeep Singh and his company, QuantumScape, promises to extend the range of electric cars by as much as 50% over today’s technology while reducing charge time — claims that are now worth about $20 billion. QuantumScape says its technology is ready to move from the lab to VW’s dealerships. But this secretive startup is very familiar with failure.

Wednesday was a big day for cryptoworld, with the biggest exchange for cryptocurrencies in the U.S. selling shares for the first time. Coinbase's IPO has been characterized as a step change in the world of crypto assets, and plenty of people are excited about the listing. At one point Coinbase's valuation soared above $112 billion — more than the owners of the New York Stock Exchange and Nasdaq combined. 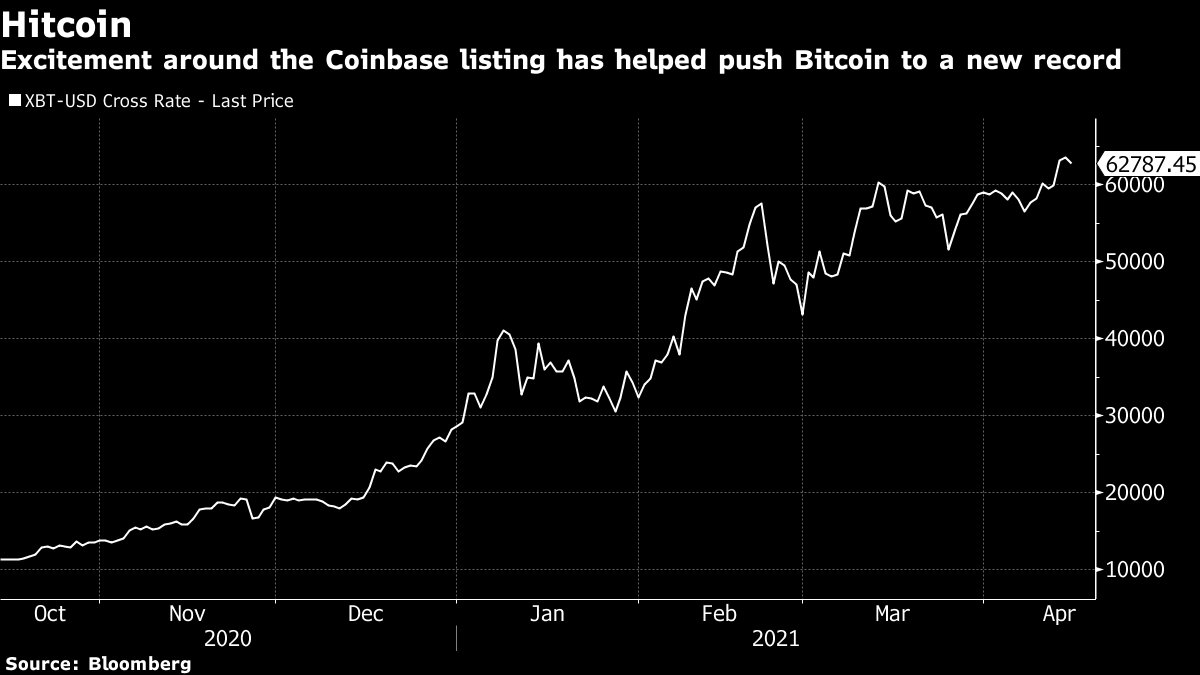 But popularity breeds competition (in addition to contempt), and there is a lot of that waiting in the wings. Notably, there are at least eight applications for Bitcoin ETFs that have been filed to the U.S. securities watchdog. As Ram Ahluwalia, the founder of PeerIQ, notes on Twitter, most of Coinbase's revenue comes from transactions, taking a small slice of the trades that go through its platform. But if people are able to buy Bitcoin with the click of a button through ETFs that plug directly into their brokerage accounts, that represents a pretty big threat to Coinbase's business. And we've already seen more and more financial players piling into the crypto business as prices soar (notably PayPal will allow account holders to seamlessly buy, sell and hold Bitcoin). You can't have it both ways. You can't say that the Coinbase IPO will spark additional interest in crypto assets without also acknowledging that more interest will ultimately spark more competition that could threaten its business model.