The boom goes on for China’s economy. Blame for India’s Covid-19 crisis is shifting toward Narendra Modi. Chinese companies are listing in the U.S. at a record pace. Here’s what you need to know to start your day.

China’s economy continued to boom in April from the record growth in the first quarter, with strong exports and rising business confidence supporting the recovery. That’s the outlook of an aggregate index combining eight early indicators tracked by Bloomberg, which remained unchanged from March in strong expansionary territory. Some of the strength this month may be exaggerated by the comparison with April 2020, when the country was still struggling to recover and reopen after a lockdown to contain the world’s first coronavirus cases. Confidence among small and medium-sized enterprises picked up for a second month in a survey of more than 500 companies by Standard Chartered, with the rise in expectations pointing to even stronger performance in the current quarter compared to the first three months of the year.

Stocks are set to open higher in Asia after strong U.S. earnings enforced evidence the recovery from the pandemic is gathering speed. Currencies were steady early Monday. Futures pointed higher in Japan, Australia and Hong Kong after most major groups in the S&P 500 advanced Friday. U.S. new-home sales rebounded in March to the highest since 2006, while output at manufacturers and service providers reached a record high in April. The 10-year Treasury yield hovered below 1.6%. Meanwhile, in 2021’s unchartable U.S. stock market, sell signals have been all but useless.

How Disruption Continues to Re-Shape the Wellness Economy

During the pandemic, consumers sought out alternative workout routines and traded in their business suits for athleisure wear. As society embraces a return to many pre-COVID norms, some adaptations are here to stay.
We recently explored the new paradigm for the health and wellness industry, and why we believe investors may want to take notice.

The second wave of the coronavirus has since grown into a tsunami in India, which is setting records for the world’s highest number of daily cases. Images of hospitals overflowing with the sick and dying are flooding social media and there’s a growing chorus of blame directed at Prime Minister Narendra Modi over his government’s handling of the pandemic. Elsewhere, with the resumption of global travel on the horizon, some people are discovering that their choice of vaccine could determine where they’re allowed to go; flush with cash and a record number of air miles after a year on the ground, leisure travelers are splurging on premium seats for their first trips back; and Hong Kong and Singapore will announce a start to their highly anticipated two-way air travel bubble this week, which is likely to begin on May 26 according to people familiar with the matter.

Chinese companies are listing in the U.S. at the fastest pace ever, brushing off tensions between the world’s two biggest economies and the continued risk of being kicked off American exchanges. Firms from the mainland and Hong Kong have raised $6.6 billion through initial public offerings in the U.S. this year, a record start to a year and an eightfold increase from the same period in 2020. The largest IPO is the $1.6 billion listing of e-cigarette maker RLX Technology. Didi Chuxing has filed confidentially for a U.S. IPO that could value the Chinese ride-hailing giant at as much as $100 billion, Bloomberg News has reported.

China Huarong Asset Management said its 2020 earnings results would be delayed past an April 30 deadline, potentially further fraying investors’ nerves after mounting worries over potential defaults by the state-owned bad-debt manager caused a meltdown in its bonds. The company’s auditors need more time to finalize an unspecified transaction before it can publish the results, according to a statement posted on Chinamoney.com, which is run by China Foreign Exchange Trade System. The firm, China’s largest distressed-asset manager, missed an earlier March 31 deadline to announce preliminary results, also saying that its auditors needed more time. That delay stoked concerns over its financial health and kicked off an almost two-week plunge in its dollar bonds.

There’s been a lot of talk about indexes of U.S. investment-grade corporate bonds having deteriorated in quality. The amount of debt carrying triple-B ratings — a notch above junk status — has ballooned in recent years. That’s raised concerns that a big chunk of the investment-grade market is susceptible to the risk of a downgrade should the economy falter. But conversely, how often do you hear people talk about upgrade risk for high-yield corporate debt? 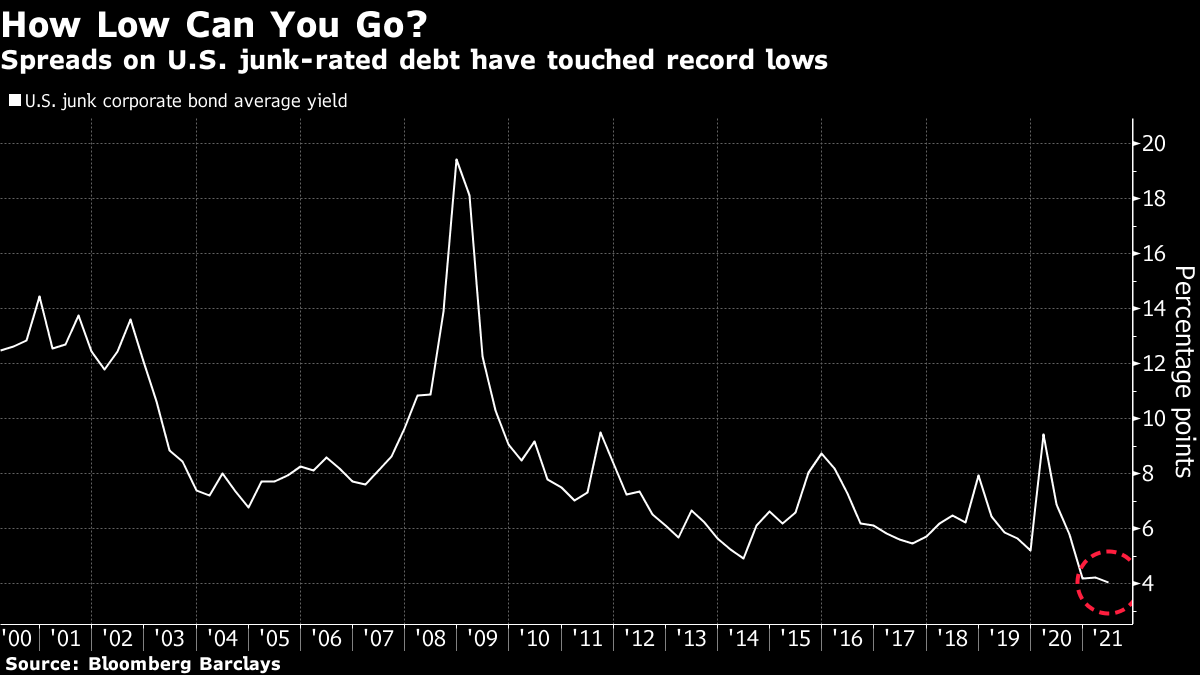 Citigroup analyst Michael Anderson makes the point that junk bond indices have more higher-rated bonds than ever. More than half of the Bloomberg Barclays High Yield Index is comprised of BB-rated credits — the highest such designation in high-yield, for instance. That’s up from 37% back in 2007. Meanwhile the amount of CCC-rated debt (just a notch above default) has shrunk from 19% to 13%. As the U.S. economy rebounds from the events of 2020, it feels like “upgrade risk” might be a bigger deal for the market than downgrade risk.