Treasury Secretary Steven Mnuchin told the Milken Institute Global Conference yesterday that “getting something done” on stimulus before the election “would be difficult.” Negotiations over a new package began in July and investors now harbour little hope of large fiscal measures ahead of the election, or even by the end of the year. The three parties to negotiation — Democrats, Republicans and the White House — are blaming each other for the failure to reach agreement ahead of the Nov. 3 vote.

The virus toll in Europe continues to rise, with both Germany and Italy reporting record numbers of new infections. France has introduced a 9 p.m. curfew in major cities including Paris, while London is set to move to tighter restrictions from Saturday. In the U.S., the resurgence of Covid-19 has now reached the vast majority of states with the country adding more than 50,000 new cases yesterday. On the vaccine front, production hurdles are hurting Russia’s attempts to roll out the one developed there. Paid Post

The Future of Domestic Manufacturing
In a post-pandemic world, domestic manufacturing will rise, predicts investment thought leader Jeff Korzenik.
See how it impacts you

It’s Morgan Stanley’s turn to update markets on trading performance before the bell this morning. Investors will be keeping an eye on the bank’s equities earnings in the quarter while also looking for an update on litigation risk. Wall Street banks have largely had a stronger-than-expected quarter for stocks and bond trading, with Goldman Sachs Group Inc. showing a 49% surge in fixed-income revenues. Charles Schwab Corp. and Walgreens Boots Alliance Inc. also report today.

With expectations of a pre-election fiscal package all but vanished and fears over a prolonged pandemic rising, it’s a risk-off day. Overnight the MSCI Asia Pacific Index dropped 1.2% while Japan’s Topix index closed 0.7% lower. In Europe, the Stoxx 600 Index was down 2.3% at 5:50 a.m. Eastern Time with every industry sector in the red. S&P 500 futures pointed to losses at the open, the 10-year Treasury yield was at 0.699% and gold slipped.

Shares of a cloud computing company called Fastly have been plunging around 30% in the pre-market today, after warning that revenue in the quarter would come in around $70 million to $71 million versus analyst estimates of $74 million. So for a $3 million quarter miss, investors are wiping off nearly $4 billion from the company’s market cap. Of course, investors can’t complain too much: At the new price, the stock will still have rallied around 330% this year. 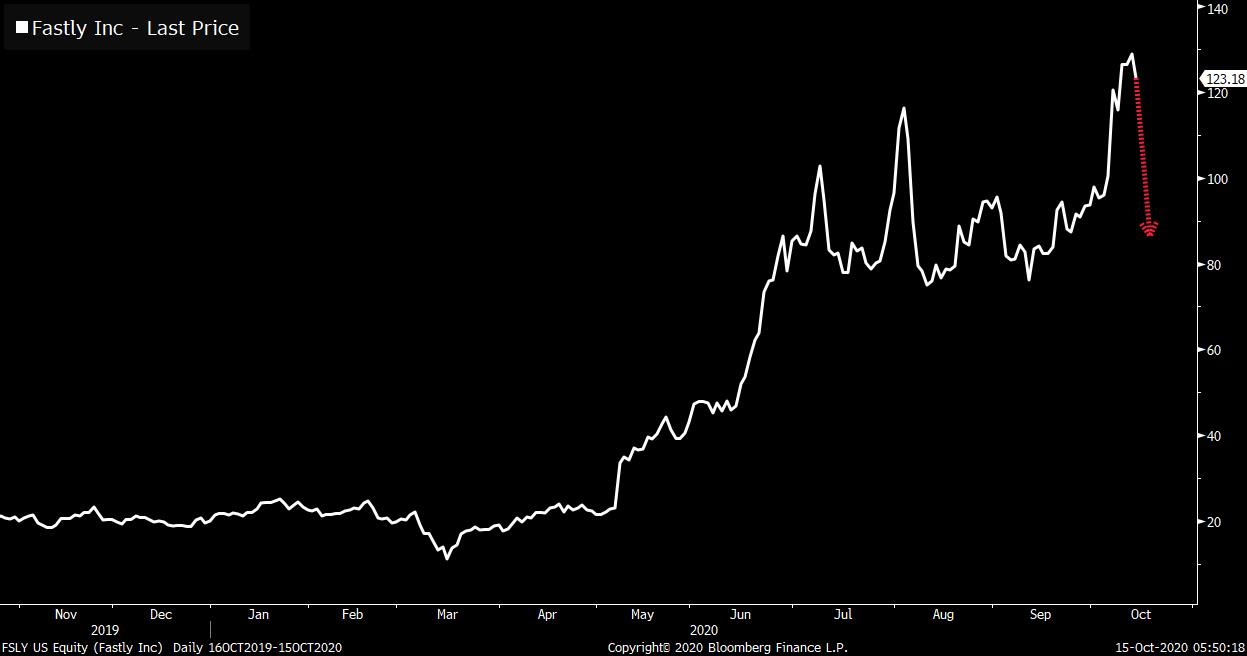 This has been an incredible year for software and cloud stocks like Fastly, and in fact you could find dozens of charts like almost exactly like this, as investors pay up big time for companies with massive growth prospects far out into the future. That said, this is what people talk about when they say a company is “priced for perfection.” Just a tiny deviation from the expected path and the stock gets violently repriced. (In this case, it was all about less-than-expected business from one customer, ByteDance.) The more optimism is baked into the company’s share price, the less it takes to tumble.