Still talking on stimulus, the bond market is saying something, and Brexit deal optimism.

House Speaker Nancy Pelosi said she’s hopeful for a stimulus agreement this week, despite her self-imposed deadline yesterday passing without a deal. White House Chief of Staff Mark Meadows said everyone is “working really hard” to get a package agreed by the weekend, adding that there are still outstanding issues. Senate Majority Leader Mitch McConnell warned the Trump administration not to agree to anything like Pelosi’s proposal ahead of the election. McConnell plans to seek a vote on the Republican scaled-down package in the Senate today.

The progress on a stimulus package is helping push the yield on U.S. 10-year Treasuries to the highest level in four months, with the spread between the five- and 30-year bond reaching the widest in four years. Many investors expect that a Democratic sweep of the Presidency and both houses of Congress would pave the way for more spending, moving yields higher and steepening the curve. One thing that investors in bonds are not pricing is a major volatility event around the election, with options wagers betting against significant moves in the weeks after the vote.

The pandemic has amplified long-term macroeconomic disruptors, and fiscal
policy – a key swing factor – may hold the key to upside or downside surprises.  Read our outlook and learn implications for investors.

In Europe, talks between the EU and the U.K. over a post-Brexit trade agreement are also running out of time. With only 10 weeks to go until a new trading arrangement must be in place, EU Chief Negotiator Michel Barnier said a deal is still within reach. The view on the European side is that British Prime Minister Boris Johnson’s warnings that he would abandon talks were mostly for a domestic audience. Formal discussions are expected to resume in the coming days, with EU officials expecting a deal to be struck by mid-November.

With no major new catalyst for investors, global equities are having a mixed session as corporate earnings continue to be the main focus. Overnight the MSCI Asia Pacific Index added 0.7% while Japan’s Topix index closed 0.7% higher. In Europe, the Stoxx 600 Index was 0.7% lower at 5:50 a.m. Eastern Time with construction and real estate companies the hardest hit. S&P 500 futures fluctuated before the open, oil dropped and gold was higher.

Shares of Netflix are down about 5% in pre-market trading this morning after the company reported subscriber growth that came in shy of estimates. Of course, overall the company has been a huge winner lately, having rallied 62% since the start of the year. It’s benefited from the fact that watching TV is a cheap and safe pandemic activity, alongside investor love for all things digital and growthy.

That being said, Netflix is an interesting test case for how much COVID has changed things, as opposed to just having pulled the future forward. In the company’s letter to shareholders they published this great chart, showing the trajectory of of net subscriber additions going back to 2016. You can just see how in the spring when the virus hit, subscribers numbers shot through the roof on a scale unlike anything previously seen. But then since around May, the number has more or less flatlined. It still looks like 2020 is going to be an extraordinary year, far ahead of anything they’ve seen previously in terms of total new subscribers. 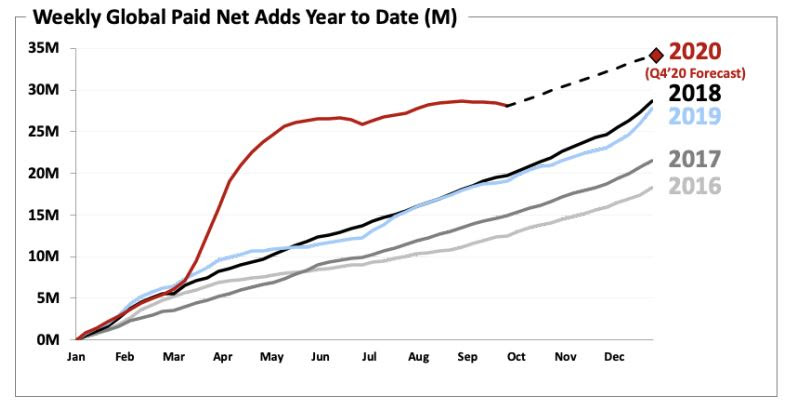 It’s worth thinking about this chart in the context of other trends we’ve seen. The shift to e-commerce more broadly. The housing boom. Trends in working from home and so on. How much of what we’ve seen this year is the start of something new and big, vs. how much in all these areas was simply a pull forward from a trend that was already set to take place.