Tech tumble, Covid record, and four days until the election.

The rally in tech shares is getting a reality check after a slew of megacap companies in the sector reported results. Apple Inc.’s shares are down more than 4% in pre-market trading after the company surprised Wall Street with lower-than-expected iPhone sales and a slump in China revenue. While earnings from other giants in the sector were generally solid, investor sentiment seems to be turning against tech. Twitter Inc. is one of the hardest hit companies with its shares tumbling after user growth disappointed.

The U.S. reported a record of more than 89,000 cases yesterday, with the total for global cases passing 45 million. Midwest states are seeing a much worse outbreak than they suffered in the spring, while New Jersey reported cases and hospitalizations are at a five-month high. German Chancellor Angela Merkel said that EU leaders should have acted sooner to impose new restrictions while France’s Finance Minister Bruno Le Maire said the lockdown will cut economic output by 15%. Paid Post

Early voting in the Presidential election reached 82 million ballots, almost 60% of the total turnout in 2016, according to the U.S. Elections Project. President Donald Trump is scheduled to hold three rallies today in Wisconsin, Michigan and Minnesota. Election forecasters have included Iowa, Ohio and Texas among tossup states, a sign of the uphill fight Trump is facing. Treasury Secretary Steven Mnuchin and House Speaker Nancy Pelosi are also in a battle — over whom is to blame for the lack of progress on the stimulus talks.

Disappointing tech results and the pandemic’s threat to growth are again giving investors pause. Overnight the MSCI Asia Pacific Index dropped 1.3% while Japan’s Topix index closed 1.9% lower. In Europe, the Stoxx 600 Index was unchanged at 5:50 a.m. Eastern Time after a string of positive earnings this morning. S&P 500 futures pointed to a 1% slump at the open, the 10-year Treasury yield was at 0.82% and gold rose.

September Personal Income and Spending data is at 8:30 a.m. Canadian August GDP is also at that time. MNI Chicago PMI for October is at 9:45 a.m. with the final print of University of Michigan sentiment for the month at 10 a.m. While the Baker Hughes rig count is at 1 p.m., oil market watchers will probably have more interest in today’s earnings which include Exxon Mobil Corp. and Chevron Corp.

The theory that the U.S. election will clear the way for a deluge of fiscal spending that will propel yields higher may still hold, but… pandemic.

The virus showed us yet again this week that it’s in charge. Global yields had only just started climbing, with polls suggesting Democrats have a shot at a clean sweep of the White House and Congress, and an unfettered decision on a large spending package. Then, a surge in infections on both sides of the Atlantic and the prospect of renewed lockdowns for Europe’s largest economies drove benchmark rates back from four-month highs. 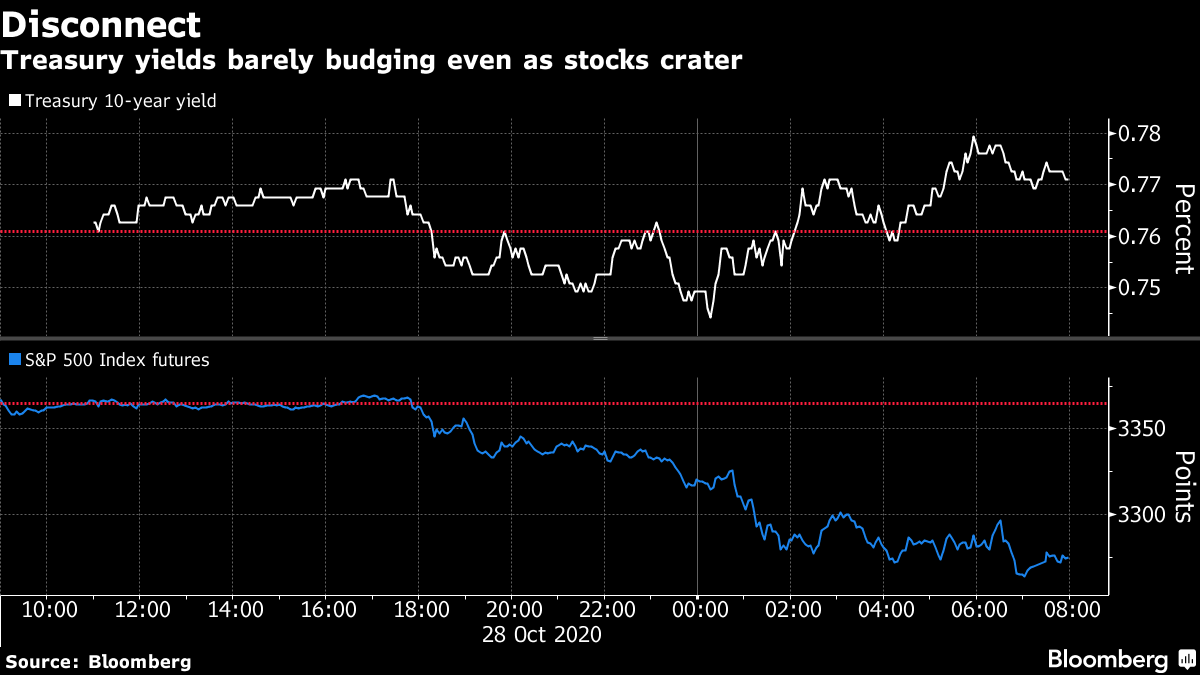 The reality is the big risk event is barely three trading sessions away, and, for bond bears, it would seem perverse to throw in the towel on what could be the trade of the year. Polls — so far anyway — still signal a Democratic victory in the presidential vote. The Senate race appears pretty tight.

Ultimately, the case for higher yields hinges on fiscal stimulus, and it’s hard to argue that’s not going to happen. Amid the crush of headlines next week, we have the Treasury borrowing estimates and refunding announcement, which could well show the government looking to raise hundreds of billions of dollars of debt in the three months to December.