Biden ahead in polls

A series of polls released yesterday show Democratic nominee Joe Biden leading President Donald Trump both nationally and in battleground states, though some state races remain extremely close. Trump has been on a whistle-stop rally tour of crucial states, and today speaks in North Carolina, Pennsylvania, Michigan and Wisconsin. With very high numbers of mail-in ballots to process, there are already signs that counting in battleground states may not be complete until several days after the vote.

Deaths from Covid-19 topped 1.2 million after the most fatalities from the virus since April were reported in the last week. England will enter a second lockdown this week after cases spiked there, following similar moves in much of Europe. The director of the World Health Organization Tedros Adhanom Ghebreyesus said he has gone into self-quarantine. There were more than 78,000 new infections in the U.S. and 826 people deaths reported yesterday. Paid Post

Limited ownership opportunities remain at  The Woolworth Tower Residences, a private collection of 32 extraordinary homes, atop one of NYC’s most iconic landmarks. With no more than 2 homes per floor, residency at the Woolworth Tower offers the utmost privacy and unparalleled lifestyle amenities.  Learn More.

Oil dropped to a five-month low as the market prepares for another double-whammy demand and supply shock. A barrel of West Texas Intermediate for December delivery was trading below $35 this morning as the market digests Libyan output which is rapidly rising towards 1 million barrels a day. While the market has already learned what lockdowns can do to demand this year, the head of Asia for Vitol Group, world’s largest independent oil trader, doubts the new lockdowns will lead to a significant drop in prices.

It is a huge week for investors with the election, a Fed decision and October payrolls all due, and they are starting it on a positive note. Overnight, the MSCI Asia Pacific Index added 1% while Japan’s Topix index closed 1.9% higher. In Europe, the Stoxx 600 Index had gained 1.2% by 5:50 a.m. Eastern Time after technical difficulties lead to a delayed start in pricing. S&P 500 futures pointed to a rebound at the open, the 10-year Treasury yield was at 0.864% and gold was higher.

Canadian October manufacturing PMI is at 9:30 a.m., with the final reading of the U.S. number at 9:45 a.m. ISM Manufacturing is at 10:00 a.m. Joe Biden holds events in Cleveland and Pennsylvania. Lumber Liquidators Holdings Inc., Mondelez International Inc., Skyworks Solutions Inc. and Clorox Co. are among the many companies reporting results.

With one day to go until the presidential election, there’s sure to be a lot of discussion today about what various possible outcomes could mean for the market. So in the meantime, here’s something to bear in mind. Whether under Democratic administrations or Republican ones, as my old colleague and current Yahoo Finance editor Sam Ro likes to say, stocks usually go up. 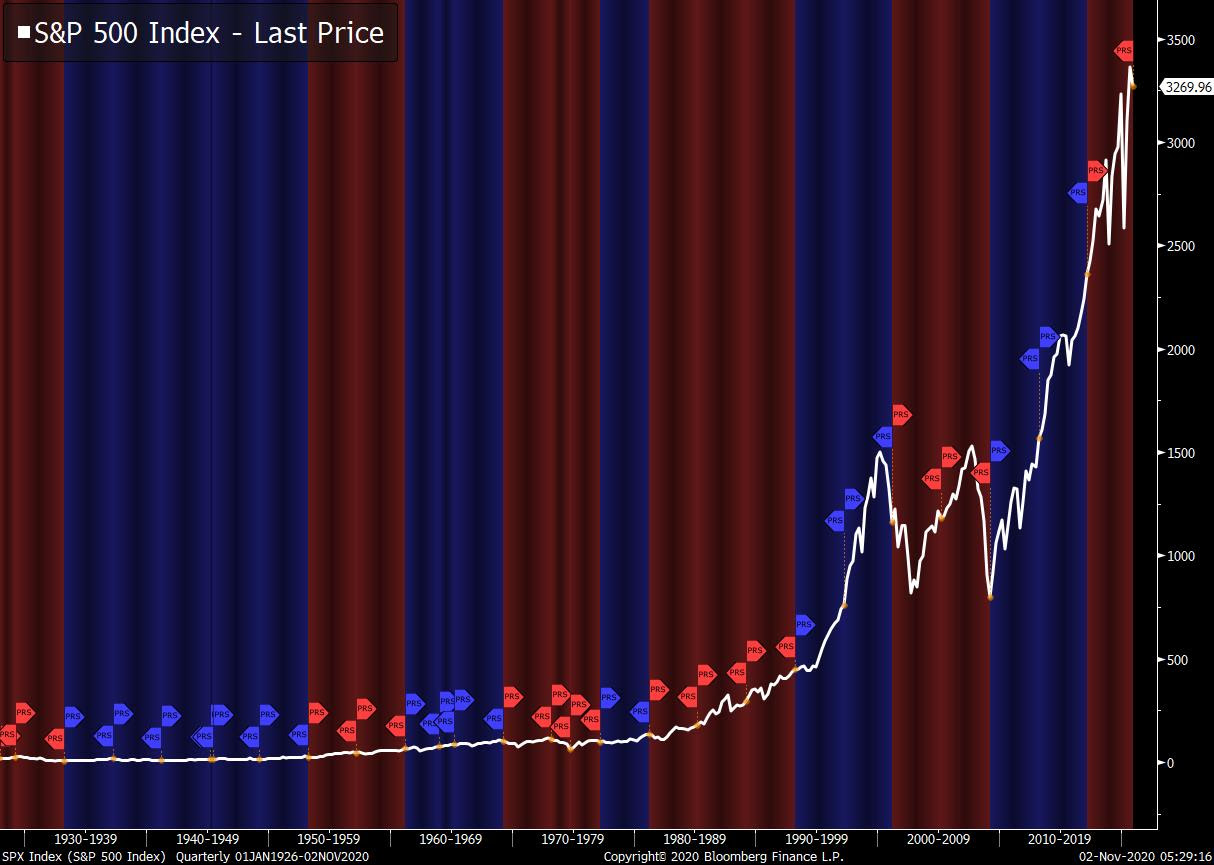 The world’s most influential leaders will be there. Will you? Click here to join Bloomberg New Economy Forum for a virtual Global Town Hall on November 16-19 and be part of change in real time.