Goldman is fined for its 1MDB role. The FDA approves its first virus drug. And Pelosi says she and Mnuchin are “just about there” on a Covid-19 relief package.

Goldman Sachs admitted its role in the biggest foreign bribery case in U.S. enforcement history, reaching multiple international settlements to end probes into its fundraising for the scandal-plagued Malaysian fund known as 1MDB. Goldman officials helped spread $1.6 billion in illicit payments across Malaysia and the Middle East as part of a scheme that diverted money raised for development projects into an international spending spree on mansions and lavish parties. The new penalty tab exceeds $5 billion now, owed to authorities and regulators in the U.S., U.K., Hong Kong and Singapore. That’s seeing a decade of intense image repair undone.

Gilead Sciences’s antiviral therapy remdesivir on Thursday became the first drug to obtain formal clearance from the U.S. Food and Drug Administration for treating the coronavirus. Regulators had granted an emergency-use authorization for remdesivir earlier this year, and it was given to President Donald Trump this month when he was diagnosed with the virus. The approval of remdesivir, sold under the brand name Veklury, could help solidify its position as the go-to medicine for Covid-19 patients even when other drugs begin to reach the market. Meanwhile, the seven-day average of U.S. deaths on Wednesday hit the highest in a month, and the outbreak is accelerating in Europe.Paid Post

Exploring the Long-Term Potential of Telemedicine

Telemedicine offers the potential of greater convenience and accessibility for patients, while lowering provider costs. With recent events proving an accelerant, explore why we believe this is the start of a structural shift in the global health care industry – and worthy of investors’ attention.

Treasury yields rose and bank shares lifted U.S. equities as lawmakers in Washington continued to haggle over a spending bill. Asian stocks looked set for a mixed start as traders readied for the final presidential debate. Futures edged higher in Japan, and were little changed in Hong Kong and Australia. The S&P 500 earlier pared its weekly decline as financial stocks rallied almost 2%. The 10-year Treasury yield popped to 0.84%, its highest since June, amid data showing the labor market is still gradually recovering. The dollar strengthened.

House Speaker Nancy Pelosi said she and Treasury Secretary Steven Mnuchin are “just about there” on resolving a key piece of a coronavirus relief package. They were nearing agreement on how to allocate money for testing and tracing to safely reopen schools and the economy, she said. Still, they haven’t settled three main sticking points: Democrats’ demands for aid to state and local governments, school funding and Republican insistence on a liability shield for employers. Pelosi and Mnuchin were scheduled to talk by phone again Thursday afternoon, but as of 4 p.m. in Washington the call hadn’t taken place.

China’s fast-growing $157 billion market for exchange-traded funds will be directly accessible to overseas investors from Friday, at least four years since the plan was first hatched. Four so-called “feeder” ETFs will begin trading in Shenzhen and Hong Kong. The Shenzhen funds will track the Hang Seng China Enterprises Index and the S&P New China Sectors Index, while the Hong Kong-listed ETFs will follow the benchmark CSI 300 Index and a gauge of China’s 5G companies. Some 900 million yuan ($135 million) of funds has been gathered in a pre-sale of the ICBC CSOP S&P New China Sectors ETF, said Melody He, managing director at provider CSOP Asset Management Ltd.

And finally, here’s what Cormac’s interested in this morning

At first glance, bets on a reflating global economy seem to be front and centre in markets. The copper price has jumped to a more than two-year high, the yuan is close behind it and 10-year Treasury yields are back above 0.80%. But that still is a modest enough rise for the global bond benchmark, and moves in longer-dated yields are also relatively subdued. 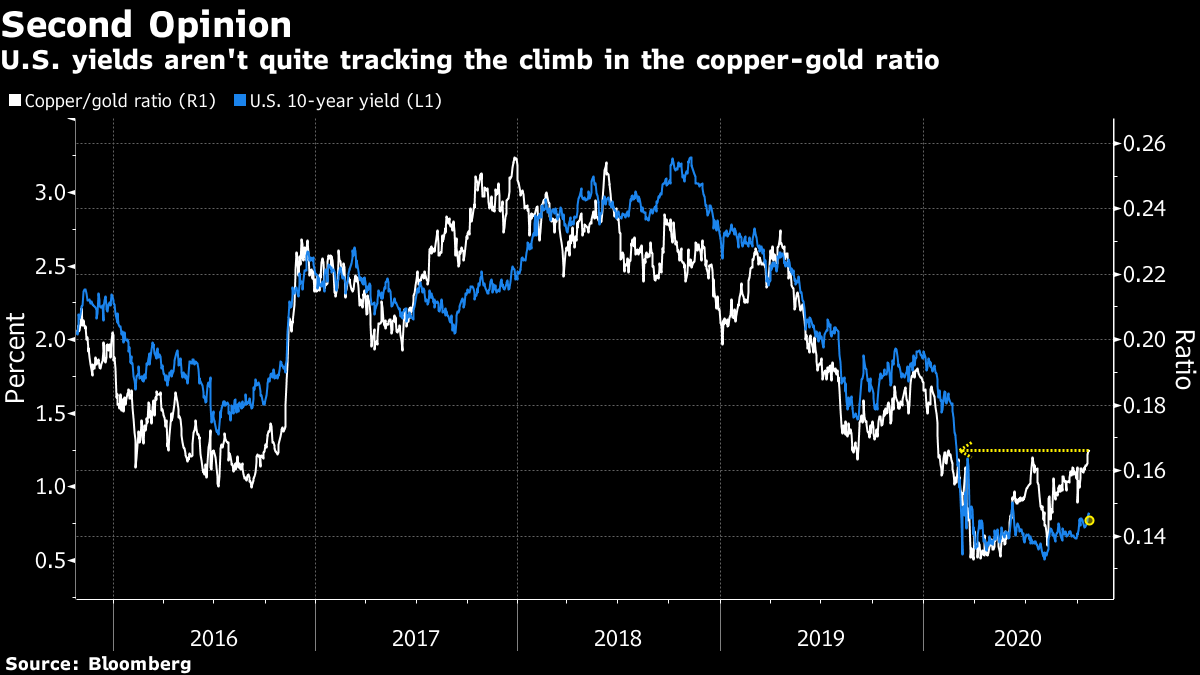 A look at the copper-gold ratio — a good gauge of sentiment on the global economy that closely tracks U.S. 10-year yields — suggests they should be even higher. Part of the reason they are not is likely that the climb in copper is heavily supply driven, with strikes in Chile increasing concerns over widening disruptions. And of course looming in the background is the potential for yield curve control from the Federal Reserve, which will come more into focus if the latest coronavirus spike begins to weigh on the economic rebound. Treasury yields can climb higher — expect the 1% level to feature prominently in upcoming market commentary. But the real question is likely how high they will rise before the Fed shows up and smacks them back down again.