The White House shifted tack on Thursday, signaling that the administration is again leaning toward a large-scale stimulus bill after House Speaker Nancy Pelosi pushed back on the idea of individual measures for parts of the economy hit by the Covid-19 crisis. According to a Pelosi spokesman, Treasury Secretary Steven Mnuchin told her that Trump wanted an agreement on a comprehensive stimulus package. Prospects for reaching a deal have proved volatile since Trump pulled his negotiators out of talks on a comprehensive package on Tuesday. U.S. stocks closed 0.8% higher.

France reported 18,129 new coronavirus cases on Thursday and is placing more cities on maximum alert, with restrictions to expand beyond Paris and Marseille. The country’s seven-day rolling average of new infections climbed to 13,448, the highest since the start of the outbreak. The head of the Paris region health agency also asked local hospitals to activate crisis measures, which include postponing scheduled surgery. In Spain, President Pedro Sanchez is calling for a meeting with ministers to decree a 15-day state of emergency in Madrid, local media reported. Meanwhile, the European Union signed an advance purchase agreement for 200 million doses of Johnson & Johnson’s vaccine candidate.

London Stock Exchange Group Plc is nearing the sale of Borsa Italiana to Euronext NV and two Italian institutions for about 4.5 billion euros including debt, according to people familiar with the transaction. The deal may be announced as early as today and would help LSE gain antitrust approval for its much larger acquisition of Refinitiv. Elsewhere, Citadel Securities plans to buy the market-making unit of smaller rival IMC Financial Markets, expanding its presence at the New York Stock Exchange. The deal would shore up Citadel Securities’ position as the largest floor broker on the exchange, according to a statement.

Oil in New York is poised for the biggest weekly gain since June with Hurricane Delta forcing operators to shut-in almost 92% of crude output in the Gulf of Mexico as the storm heads toward the U.S. coast. Delta regained major hurricane strength and is forecast to slam into the already battered Louisiana coast on Friday after barreling across the Yucatan Peninsula earlier in the week. Prices have also been buoyed by an oil-workers strike in Norway, which is threatening almost a quarter of its the nation’s output.

European stock futures are little changed after a mixed session in Asia, where Chinese equities advanced as markets reopened after a week-long holiday. After Danish insurer Tryg A/S’s third-quarter update, today’s schedule includes industrial production data for Italy and France, as well as U.K. GDP for August. Coming up this weekend, Trump said he hopes to hold a rally on Saturday after his doctor said he should be able to resume public events that day.

Animal spirits are surging in global stocks and it seems traders are not as concerned about the upcoming presidential election as a risk event as the volatility market would have us believe. Having noted yesterday that U.S. chip stocks are at a 20-year relative high, it would be amiss not to point out another key leading American indicator — the Dow Jones Transportation Average — has been making fresh records all week. Meanwhile in Europe, small cap shares — also closely watched as a measure of investor sentiment — have climbed to a 25-year relative high against the broader market. The Stoxx Europe Small 200 Index has surged 6% over the last two weeks, handily beating the Stoxx 600 by over 2 percentage points. And a gauge of European stocks with the weakest balance sheets has outperformed its “stronger” counterpart by a similar margin. It’s likely that given the column inches the election is getting globally — and the extremes traders have gone to hedge its aftermath — investors are deciding it will be a non-event and are dialling up the risk anyway. 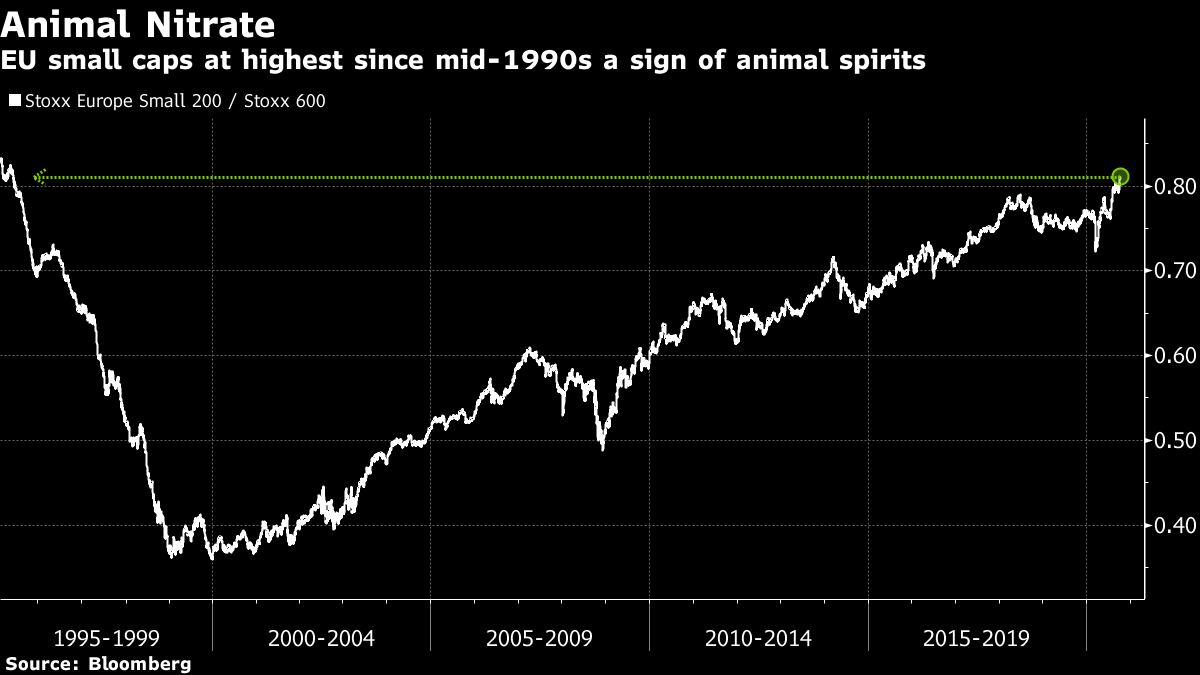 Global Macro Technical Thoughts – Jitschak Nager – Where are the trades?