Negotiations between Britain and the European Union over their relationship post year-end are approaching a crisis after EU leaders told U.K. Prime Minister Boris Johnson he must make concessions. David Frost, the U.K.’s chief negotiator, said he was “surprised” and “disappointed” at the warning, adding that Johnson would respond on Friday. Things took a twist as European Commission President Ursula von der Leyen left a summit in Brussels after a member of her staff tested positive for Covid-19. The pound, meanwhile, dipped amid risk Johnson will decide to pursue a no-deal Brexit. Here’s a reminder of sterling’s ride since the referendum all those years ago.

Londoners are banned from mixing with other households indoors from Saturday, but with leaders in the north of England fighting back against curbs, Johnson may be pushed toward a national lockdown. Paris curfews are also due to begin, with France joining Germany, Italy and Ireland in reporting record daily infections, while Spain added the most since April. As a result, Europe is well and truly losing the fight to keep its economy open. Elsewhere, in the latest in a string of medical setbacks this week, remdesivir had no definite effect on a hospitalized patient’s chances of survival in a clinical trial by the World Health Organization. The study has not yet been peer-reviewed and maker Gilead Sciences Inc. said it’s unclear if any conclusive findings can be drawn.

Europe’s luxury stocks, from Gucci owner Kering to U.K. trench-coat maker Burberry Group Plc, could be active after the conglomerate LVMH, which owns Louis Vuitton, reported third-quarter sales at its key fashion and leather goods division that impressed analysts. The publication bodes well for the rest of the sector, confirming that summer was strong for the industry, according to analysts at Bernstein. The fashion and leather goods business, a bellwether for a sector that’s been trading close to pre-pandemic levels in spite of rising coronavirus cases, beat analyst estimates in a big way and the drinks unit also did better than forecast, Jefferies analysts said.

Trade wars are back on the agenda after the U.S. threatened retaliation if the EU goes ahead with tariffs on $4 billion worth of American products. “If they strike back, then we’ll strike much harder,” President Donald Trump told reporters. “They don’t want to do anything, I can tell you that,” he added. The bloc this month won the World Trade Organization’s permission to hit U.S. goods with tariffs in its ruling over illegal state aid America provided to Boeing Co., though the EU will likely hold fire until after next month’s U.S. election, according to three officials familiar with its thinking.

European stock futures are slightly higher this morning after a big down day Thursday. Engineering group Sandvik AB and hedge fund Man Group Plc are among companies reporting, while quarterly earnings from carmaker Daimler AG beat analyst estimates. Meanwhile, Barclays Plc boss Jes Staley and Banco Santander SA’s Ana Botin are among speakers on a virtual event from the Institute of International Finance. Elsewhere, U.S. retail sales is the data highlight and Moody’s is due to update on its U.K. sovereign rating later today.

One of the most consensus trades in markets today is not playing ball. The much-maligned dollar is thumbing its nose at its critics and making a push to break out of the downtrend that it’s been in for most of the year. The ICE U.S. Dollar Index has climbed almost 1% this week to reach the top of the downward channel that began after it touched a more than three-year high in March. A break higher would be a bullish sign for the gauge of the greenback, which has slumped about 9% since March as investors reacted to unprecedented pandemic-related monetary stimulus from the Federal Reserve and rock-bottom interest rates. On top of valid long-term structural reasons to be a dollar bear, the greenback is at risk from a Democratic sweep in the U.S. elections and the hopefully positive news flow to come shortly on a coronavirus vaccine. But the dollar is still a haven in times of economic uncertainty, and the mounting restrictions in some parts of the world to fight the resurgent coronavirus could give any break higher some legs. 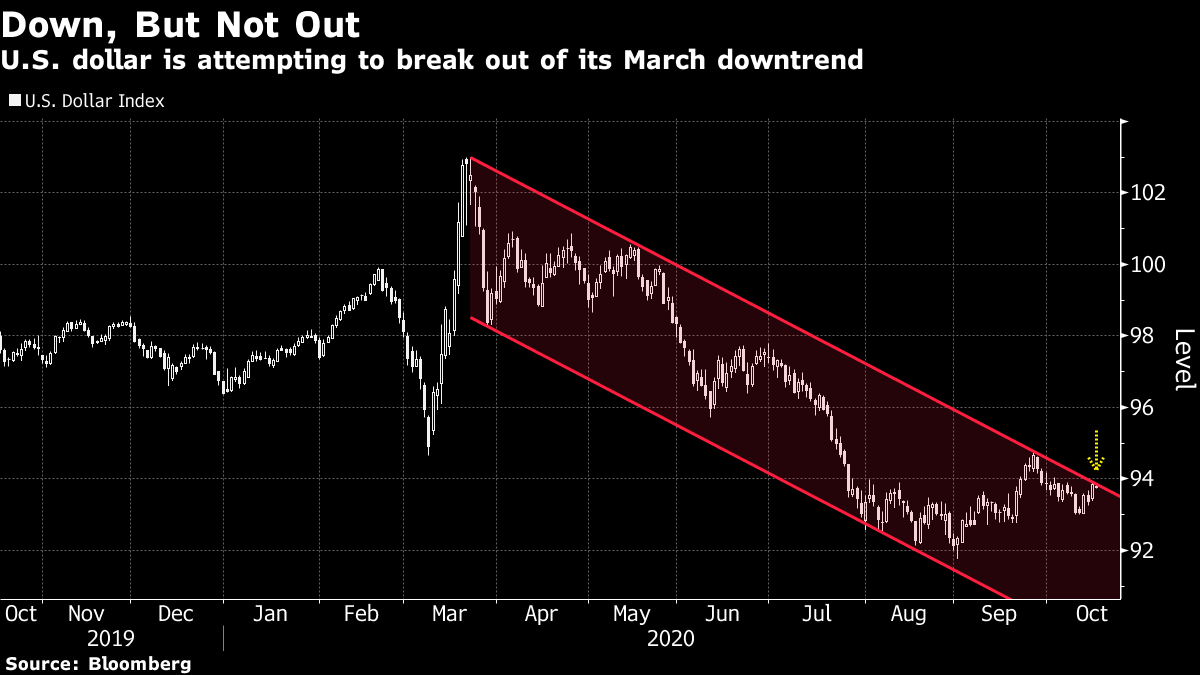 OP: Tic-Tac-Toe, Three in a Row

Global Macro Technical Thoughts – Jitschak Nager – Where are the trades?

OP: Tic-Tac-Toe, Three in a Row