Italy has put in place its strongest virus restrictions since the country ended a national lockdown in May and Spain is also imposing new measures, including a curfew, as rising infection rates force European governments to act. Bulgaria’s prime minister and Poland’s president have both tested positive for Covid-19, while three staff and advisers close to U.S. Vice President Mike Pence have also contracted the virus. The signs across the rest of the U.S. are not encouraging either, with a surge in cases in Midwest states moving further east and cases in New York and New Jersey at the highest since May. The U.K., meanwhile, is considering cutting the isolation period for people who have come into contact with a virus-carrier.

The White House and House Democrats accused each other of “moving the goalposts” on stimulus legislation, with House Speaker Nancy Pelosi saying that the chamber may pass a pandemic relief plan this week but that a deal with the White House remains elusive. There is growing pessimism that nothing will be passed before the election on Nov. 3 as the two sides continue to trade blame. On the campaign trail, Joe Biden is  targeting states that haven’t voted Democrat since 1992, while Trump is seeing enthusiasm fade in some key rural states and continues to hold rallies in battleground states in defiance of public-health guidelines.

Tensions between Turkey and France, which have been sparked in recent months over issues including Libya’s civil war and Turkey’s energy exploration strategy, are once more ramping up. Turkish President Recep Tayyip Erdogan reiterated his criticism of France’s treatment of Muslims and repeated his call for French President Emmanuel Macron to get psychiatric help. Erdogan’s remarks were made in response to France pledging a crackdown on Islamic extremism following the beheading of a teacher while France recalled its ambassador from Ankara following Erdogan’s initial comments, which were then broadened to criticism of the rest of Europe by his communications director.

Three major central bank decisions will arrive in the coming week — Euro-area, Canada and Japan — and all are likely to signal renewed levels of anxiety about the persistence of Covid-19 and the lingering impact on the global economy. A survey of economists by Bloomberg indicated the European Central Bank is likely to step up its monetary stimulus program, albeit not until its December meeting. For investors, it is likely a long and difficult road ahead, particularly those banking on a vaccine fixing the global economy’s problems, as questions remain about how effective that will be, how easy it will be to distribute and how many people will be willing to take it.

European and U.S. stock-futures are trending lower going into the new week as a U.S. stimulus deal remains elusive and virus infections continue to rise. Crude prices are also sinking for the same reasons. The earnings calendar is topped by German software giant SAP, which cut its sales outlook in a release on Sunday owing to Covid-19 weighing on demand for its cloud products. Brexit talks also remain in focus with negotiators from the U.K. and European Union extending the trade talks through to October 28, keeping pound and domestic U.K. stock watchers on their toes.

Falling odds of a Democratic “Blue Wave” should raise a few alarm bells over the recent surge in bets that a significant fiscal stimulus plan after the election will lead to a steeper U.S. yield curve. The probability of the Democrats taking the White House, the House and the Senate fell to 51% Friday from a high of 62% at the beginning of October, according to PredictIt. That’s now about a coin toss and comes as speculators continue to pile into wagers on higher yields for longer-dated U.S. Treasuries. Speculative net short positions in long bond futures have increased to a fresh record, and net long positions on 10-year Treasuries are edging back toward zero, according to the latest Commodity Futures Trading Commission data. The spread between 10- and 30-year yields hit the highest in over four years last week as the Blue Wave narrative gained momentum. But if it has become just a 50/50 heads or tails, the current stimulus saga should remind bond bears what could happen if President Donald Trump wins or a newly-elected Joe Biden doesn’t have a friendly Congress. 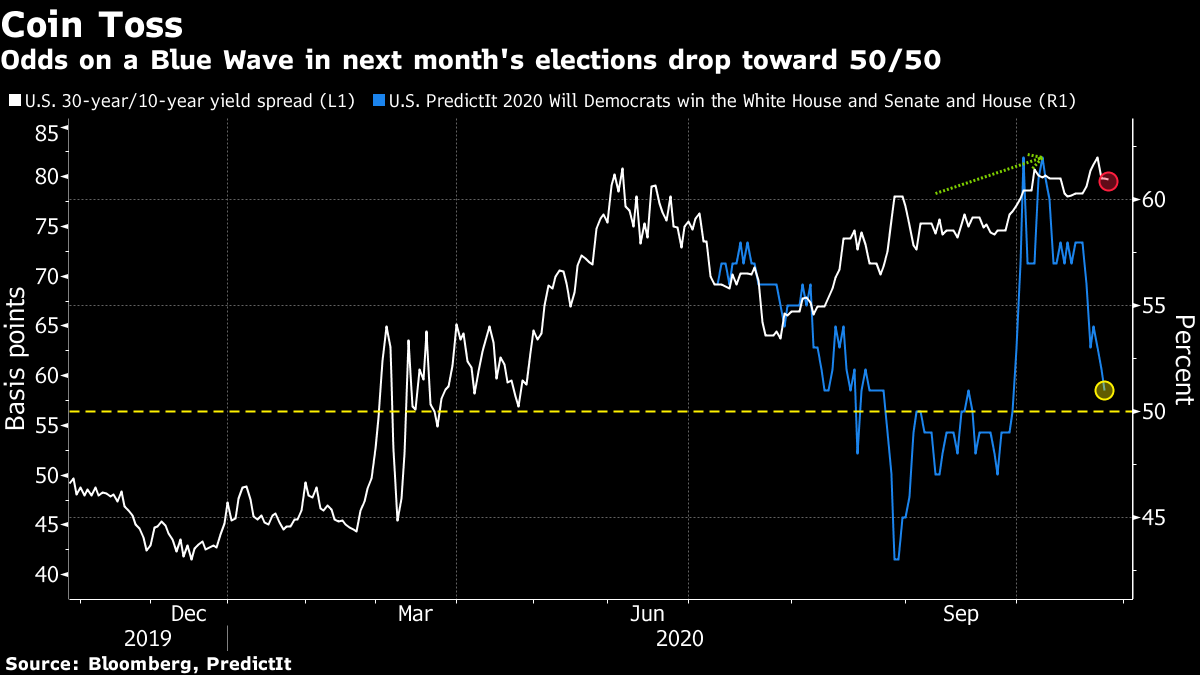 (The Oct. 23 edition of 5 Things incorrectly stated the timing of results from Klepierre)