European and U.S. equity futures are trending lower once again on Wednesday, following declines in Asian stocks. Surging coronavirus case numbers in Europe and the U.S. are weighing on sentiment, as is the lack of a U.S. stimulus plan, with the White House and House Democrats now conceding a deal is unlikely before the election. Also adding to the mix:  software giant Microsoft’s sales beat estimates but its stock slipped in extended trading on a slightly disappointing forecast. Oil prices dipped after a report indicated higher U.S. crude stockpiles. And to add to the pessimistic mood, there are mixed signals on China’s economic recovery.

The U.K. and France reported their highest Covid-19 death tolls since the first wave of the coronavirus, underlining the ongoing challenge the continent faces in getting the virus under control. France is readying new measures, reportedly including a one-month lockdown. U.K. Prime Minister Boris Johnson, meanwhile, is facing the ire of his own lawmakers over restrictions. Hospitalizations are also surging across the U.S. and putting more pressure on the health-care system. The country’s focus on vaccines and treatments, rather than emphasizing measures like social distancing, masks and nationwide testing, also brings with it the risk that any return to normal life will take longer.

President Donald Trump’s campaign slashed its advertising budget in Florida, leaving the spending burden there with the Republican National Committee, and is instead focusing on northern states which handed him a victory in 2016. The president continues to pin hopes on raucous rallies that proved successful last time around but which pollsters say this time could be cementing his defeat during the time of Covid. Democratic candidate Joe Biden, meanwhile, made a speech in Georgia, once a safe Republican state which the Democrats are hoping to flip in this election.

The extended trade talks between the U.K. and the European Union are continuing, with little indication this week of how the negotiations have progressed bar the U.K. saying it was hopeful that a deal can be struck. Fishing remains a significant bone of contention but the EU has moved to ease one headache related to stock-trading. The pound could see more gains in the short-term ahead of the U.S. election, though whether it can maintain this once election-driven dollar selling is over will be another question. And fund managers say the best way to invest during Brexit is by avoiding the U.K.

The economic calendar is relatively quiet, with focus firmly on the European Central Bank’s meeting on Thursday. Watch for any reaction to a report that LVMH and Tiffany are holding talks to lower the price the Louis Vuitton-owner would pay for the U.S. jeweler. Danish brewer Carlsberg raised its earnings forecast after its sales beat estimates. And there are plenty more earnings to pore over, including from Deutsche Bank, chemicals group BASF and later from U.K. drug giant GlaxoSmithKline.

Arguably the dog that didn’t bark during the recent flurry of reflation bets was gold. Despite a break through 0.8% in 10-year Treasury yields, a weaker dollar and higher inflation expectations, the yellow metal has pretty much hugged the $1,900 level since late September. That’s unusual for a so-called reflation hedge and it’s worth noting that it hasn’t reacted much to the resurgent coronavirus or recent increase in U.S. equity volatility either. The more philosophical view is that gold is having an identity crisis — championed by some as the classic haven and lauded by others as a risk-on asset for a new world — opposing views keeping the price in check for now. A more cynical scenario is that too many were burned by the mini-mania this summer that saw the metal surge then violently reverse. Back then gold was helped by a continuing slide in real rates, which themselves have stabilized now. But a Blue Wave next week could reignite some of the conditions that pushed gold higher this year and that could wake the metal from its recent slumber. 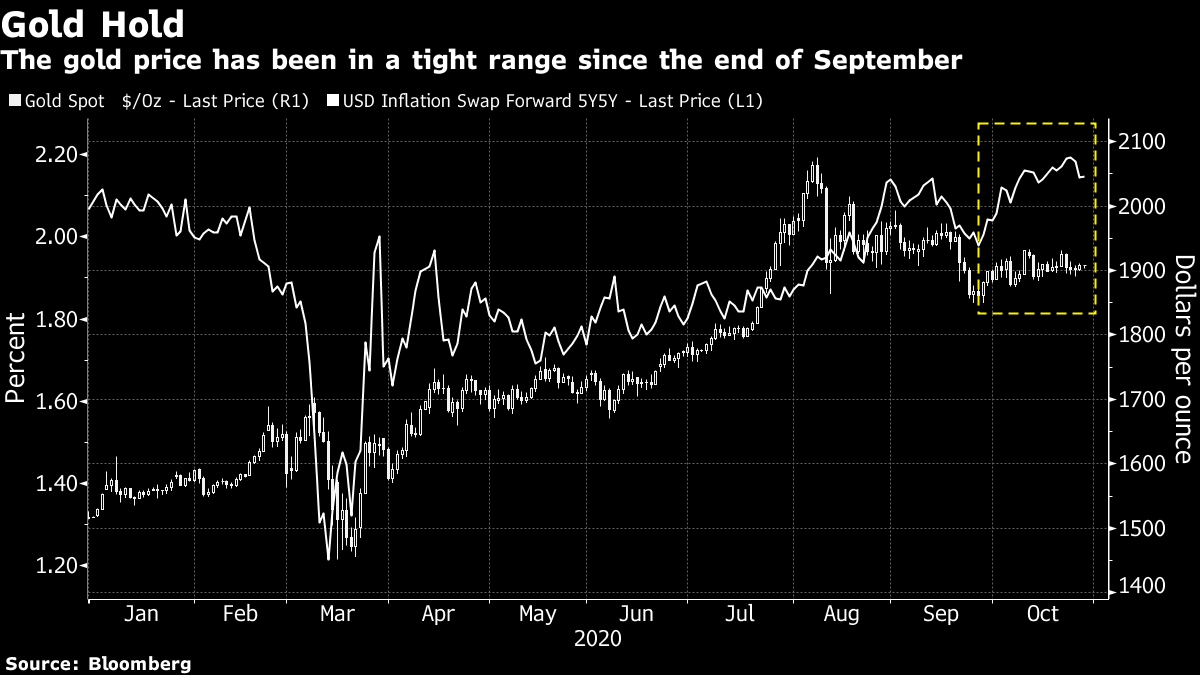