Asian stocks are set for a bright start to the week. Key Saudi oil terminal is targeted in a missile attack. Bitcoin may lose its status as the crypto top dog. Here's what people in markets are talking about today.

Asian stocks are set to start the week strong. The U.S. House is ready to approve a $1.9 trillion Covid-19 stimulus and China data pointed to strong global demand as economies recover from the pandemic. Currencies were steady. Futures pointed higher in Japan, Australia and Hong Kong. On Friday, U.S. stocks rebounded. Benchmark 10-year yields stabilized after hitting 1.6% as U.S. jobs data topped estimates, fueling anxiety the economy could run too hot and kick up inflation.

In an escalation of attacks on oil, Saudi Arabia's most protected oil facility came under fire on Sunday, sending oil prices above $70. But the missile and drone barrage didn’t cause “loss of life or property," according to the Saudi Energy Ministry. Yemen’s Houthis claimed a series of attacks on Sunday, including the one on the Saudi Aramco facility at Ras Tanura, which is the world’s largest oil terminal, capable of exporting roughly 6.5 million barrels a day — nearly 7% of current oil demand. The Saudis have raised prices for its crude for shipment to Asia and the U.S. next month after OPEC+ extended oil supply constraints, pointing to a tightening physical market.

The Next Generation of FinTech

While paying for goods and services with a smartphone is FinTech’s most recognizable use, its potential extends far beyond point-of-sale transactions. The emergence of Buy Now Pay Later (BNPL) services and digital wallets for cryptocurrencies are just two examples of
how FinTech is becoming more enmeshed in the financial system.

Ethereum blockchain developers have approved a proposal to destroy some of their Ether digital currency. Before the change, Ether supply was theoretically finite, leading to criticism that its underlying monetary policy was weak and inflationary. The change could spur even bigger gains in the price of the cryptocurrency, which has soared 536% in the past year, while Bitcoin is up about 430%. Meanwhile, China is pushing ahead with a world-leading effort to create a digital version of its currency.

A sophisticated attack on Microsoft's widely used business email software is morphing into a global cybersecurity crisis, as hackers race to infect as many victims as possible before companies can secure their computer systems. The attack, which Microsoft has said started with a Chinese government-backed hacking group, has so far claimed at least 60,000 known victims globally, including the European Banking Authority. The attack drew the concern of U.S. national security officials, in part because the hackers were able to hit so many victims so quickly. Researchers say in the final phases of the attack, the hackers appeared to have automated the process, scooping up tens of thousands of new victims around the world in a matter of days.

A top Chinese diplomat has urged the U.S. to stop “crossing lines and playing with fire” on Taiwan, as part of a broad series of warnings to President Joe Biden against meddling in Beijing’s affairs. Chinese Foreign Minister Wang Yi said at his annual news briefing on Sunday there was “no room for compromise or concessions” in Beijing’s claim to sovereignty over the democratically ruled island. The Biden administration has pledged to put greater emphasis on human rights and building an allied response to China, even as it quiets down the anti-Chinese rhetoric of the Trump era. Here's why the Taiwan issue is arguably the biggest risk for a China-U.S. clash.

What's the world's best-performing major currency? Step forward the Chinese yuan, which has now outperformed on a 12-month, three-year, five-year and 10-year basis, according to Gavekal Dragonomics. The yuan has a lot going for it, especially over the past 12 months. China is the only major economy to have officially escaped recession last year. Its trade surplus keeps going up, with export data released over the weekend showing another surge in the first two months of the year. And perhaps most importantly, China is one of the few places where investors can find positive real rates on sovereign debt. For all these reasons 2020 has become a watershed year in the way global investors approach Chinese markets, with money pouring into the country's bonds (as we've discussed in this space before: "The sound you hear is China sucking in global capital."

But there's an external force that could squeeze the yuan higher too, according to Gavekal. Whenever oil prices rise, people tend to start talking about petrodollars flooding back into the financial system. And with crude now trading above $70 a barrel for the first time in almost two years, there's a chance that oil producers might deploy some of that extra money into yuan-denominated assets — and the yuan itself. It wouldn't be the first time oil exporters diversified their reserves, with the euro having been the prime beneficiary of sky-high commodities prices around 2007 and 2008. In fact the euro has been positively correlated with the price of Brent for many of the years between 2007 and today. 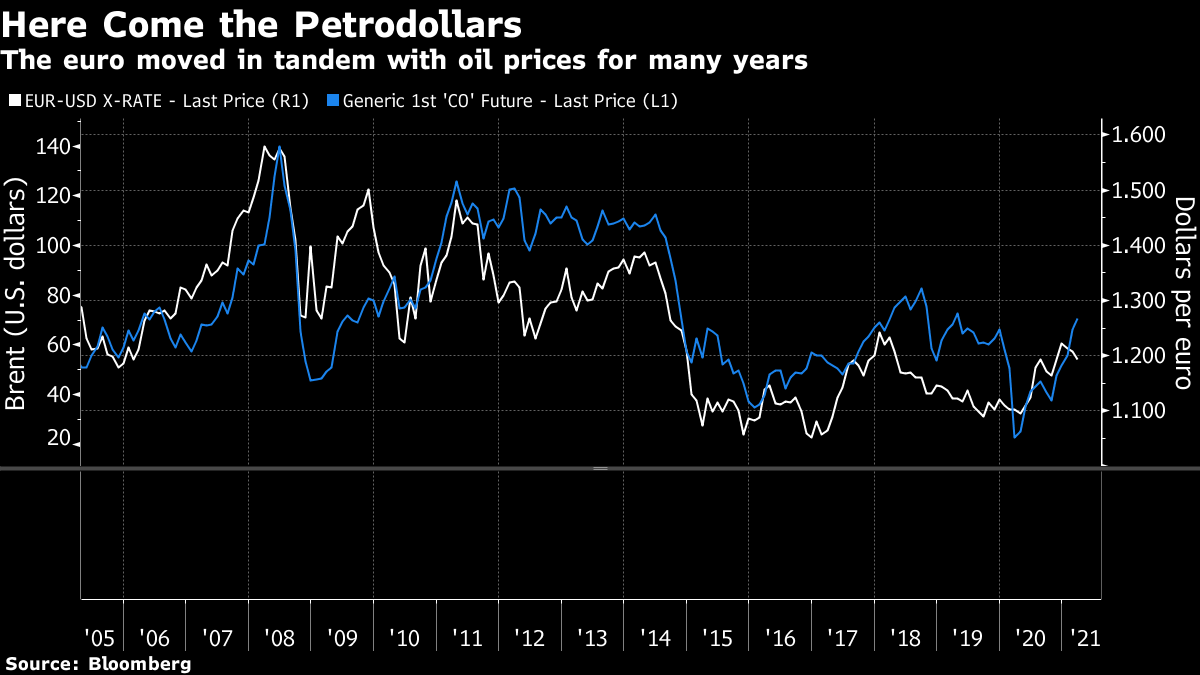 The question is whether the yuan will be attractive to the oil exporters in the same way the euro once was. And here, there's an argument to be made that China's unique yield environment might make a huge difference. As Gavekal's Louis-Vincent Gave puts it: "Now that this trend has started, will buying from the sovereign wealth funds of the UAE, Saudi Arabia, Central Asia and elsewhere drive appreciation of the renminbi, just as it drove euro appreciation 15 years ago? What else would they buy? Negative yielding bonds denominated in currencies with poor momentum and stretched valuations? Given the positive real yields on renminbi bonds, the positive momentum on the renminbi, and the ever-accelerating inflows, why buy anything else?"

Protected: OP: Why the Markets Are So Volatile

OP: Why the Markets Are So Volatile