Hiring in the U.S. is expected to have only moderately slowed in November despite the resurgence of the pandemic. The median estimate of economists surveyed by Bloomberg suggests 475,000 new positions were created in the month, with the unemployment rate slipping to 6.8% when the data is released at 8:30 a.m. Eastern Time. Numbers already published this week provide a mixed picture of the labor market, with yesterday's jobless data pointing to a gradual improvement while Wednesday's ADP private payrolls for November fell short of expectations.

There are, once again, increasing signs in Washington that a fiscal stimulus package could be agreed before the end of the year. Senior Republicans are warming to the idea of using a $908 billion proposal from a bipartisan group of lawmakers as a basis for a deal. With his own party members eager to get some kind of deal done, Senate Majority Leader Mitch McConnell's position backing his own proposal is becoming an increasingly isolated one. Senator Lindsey Graham said President Donald Trump would support the new proposal if it had the right policy provisions.

President-elect Joe Biden said he would ask all Americans to wear a mask for the first 100 days of his administration to help prevent the spread of the coronavirus. He also said that he has asked Dr. Anthony Fauci to take a bigger role in the White House. His comments come as infection numbers continue to rise across the U.S. with lawmakers struggling to enforce restrictions. The U.K. government said it hopes to inoculate millions of Britons before the end of the year after it became the first Western nation to approve the Pfizer-BioNTech vaccine for use.

Stocks are rising again as investors welcome moves on stimulus and the successful conclusion of the OPEC+ meeting. Overnight, the MSCI Asia Pacific Index added 0.5% while Japan's Topix index closed broadly unchanged. In Europe, the Stoxx 600 Index had gained 0.3% by 5:50 a.m. with oil stocks by far the best performer. S&P 500 futures pointed to a higher open ahead of jobs data and the 10-year Treasury yield was at 0.929%. A barrel of West Texas Intermediate for January delivery rose to $46.26 and gold eased slightly.

As well as the jobs report, we get the October U.S. trade balance at 8:30 a.m. Canada also publishes its employment numbers at that time. The final reading of October factory and durable goods orders is at 10:00 a.m. The Baker Hughes rig count is at 1:00 p.m. Chicago Fed President Charles Evans, Fed Governor Michelle Bowman and Minneapolis Fed President Neel Kashkari speak later.

The term high-yield debt has become a serious misnomer in the current buy-anything-that-isn't-nailed-down market. The rate on the U.S. junk bond index fell to a record low in November, so it wasn't going to be long before the rest of the world followed. This week the Bloomberg Barclays global high yield partied to the same milestone.

There are signs of this bond-fest getting upstaged, judging by the magnetic performance of equity exchange traded funds last month. ETFs tracking stocks pulled in a record $81 billion, compared with $17 billion for their fixed-income counterparts. The flows come as equities worldwide posted their largest monthly advance since 1988, and the broad-based gains included the best month ever for U.S. small cap stocks and even a 25% surge in energy shares. 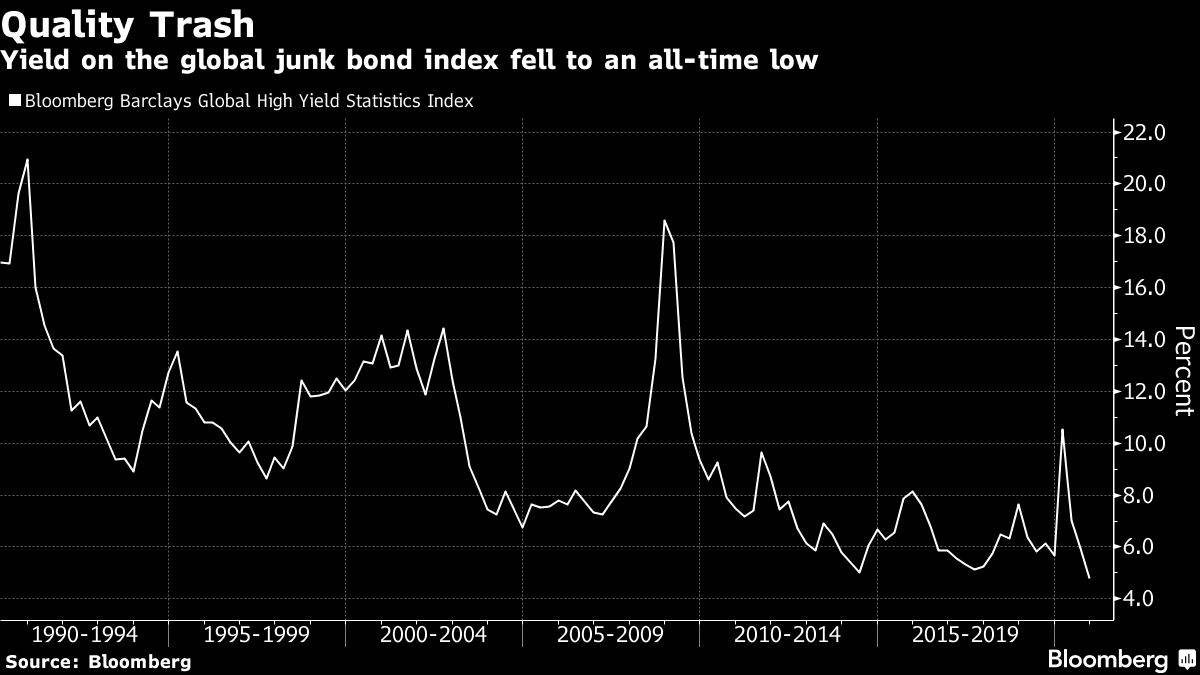 Not that this year's haul for bond funds is exactly humble. Inflows to fixed-income ETFs this year surpassed the 2019 record of $154 billion with three months to spare, thanks in large part to the Fed's credit purchase facility introduced in April. And they're still pulling in assets, even since the confirmation of that facility's expiry at the end of the year.

The positive reading on all this is that financial markets may be starting to count less on the central bank's support after all. At least, that's the takeaway from Bryce Doty, portfolio manager at Sit Fixed Income Advisors. He's now focusing his investments in inflation bonds, cyclicals "and nearly everything the Fed wasn't buying and distorting/propping up over the past six- to eight months."

"It feels like a lot of cash that was sitting on the sidelines is coming into the market again,'' he said. "It's almost like the Fed decided to start pumping a bunch more money into the financial system, but they haven't."