This week markets were fixated by an astronomical run-up in shares of GameStop Corp., which at one point were up 2,000% in less than a month. Much of the moonshot was driven by retail investors, who used online forums like Reddit's WallStreetBets to organize a concerted push at the expense of hedge funds like Melvin Capital Management LP.

Now, the White House is monitoring the situation. Congress is planning a hearing on it. Federal Reserve Chair Jerome Powell has been asked about the whole saga. Hedge fund losses ran into the billions. U.S. securities regulator says it's watching the drama. GameStop even almost brought Ted Cruz and Alexandria Ocasio-Cortez together. 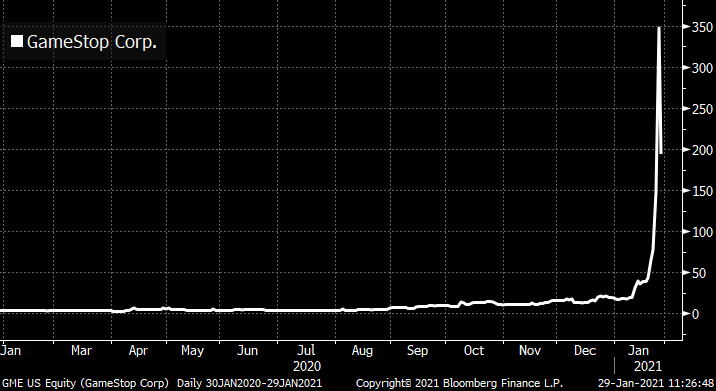 So, what exactly just happened and how has this legion of small retail investors been able to make a big move in the price of a brick-and-mortar videogame retailer? And what does it all mean for the future of markets?

Read on for a Bloomberg explainer.

GameStop shares have surged from $19 at the start of the year to as much as $483 at one point this week. Stocks that experience moves this extreme and this fast usually have technical drivers behind them.

Some traders on online forums saw that GameStop was one of the most 'shorted' in America. What this means is that investors had borrowed shares from brokers and sold them in the market with the expectation that price would fall so they could buy the shares back, return them to the broker and then pocket the difference. The problem for investors that are short a company is that they will eventually have to buy the shares back no matter what the price is.

The very large short interest in GameStop meant that retail investors could, if enough of them moved together, push the share price of the company higher. This would cause the investors who were short to buy stock to limit their loses, with that buying pushing the price even higher. This can lead to very violent share price moves – called a short squeeze.

Another tactic that's been used by retail traders to push shares of the company higher comes from the options market, which involve contracts that give investors the right to sell or buy a stock.

If a trader buys an option to buy a stock at a vastly inflated price to the current market value, they can pick it up fairly cheaply. For example, on Jan. 21 a GameStop option with a $60 strike price could be purchased for $0.07. The dealer who sold the option would usually buy some of the stock in order to hedge their position, which again would push the price higher. The more options bought, the more the dealer has to buy stock, and the higher the price rises. As it gets closer to the option strike price, the dealer has to buy even more stock to cover their exposure. This is known as a gamma squeeze.

The traders on online forums have been using these tactics for a while, deploying the options trade to lift the price of companies such as Virgin Galactic Holdings Inc. and Plug Power Inc. early last year.

If they can get a short squeeze and a gamma squeeze in place, both can become self-sustaining, leading to a big surge in the share price, lots of gains for the traders, and a proliferation of rocket emojis.

But Why Video Games?

GameStop ticked the “massive short position” box. But it also had a couple of other factors in its favor for a move like this. The free float (the number of shares that could be traded) was relatively small, meaning shares might not be readily available in the market for investors covering their shorts — scarcity driving the price higher. The other thing it had in its favor was something we could call "chat momentum." Online forums had been discussing this stock for a long time. So when the move started there were plenty of retail investors ready to pile into a stock they were familiar with.

At its peak on Thursday, GameStop had a market value of $33.7 billion, bigger than half of the companies listed on the S&P 500 Index. For many of the retail traders involved, the chance of making huge amounts of money was an obvious motivating factor. For some others, getting one over on Wall Street seems to have been a strong added bonus.

But this isn't just a story about GameStop. There are short squeezes happening all over the world at the moment.

Basically, anything learned in business school about which stocks to buy based on earnings, the outlook and macro factors are meaningless in trades like this. Technicals trump fundamentals. Flows come before pros. All that matters is whether enough traders think they can force the price of a company higher and profit from the rise. And the big driver of that right now seems to be how hated the company is on Wall Street. 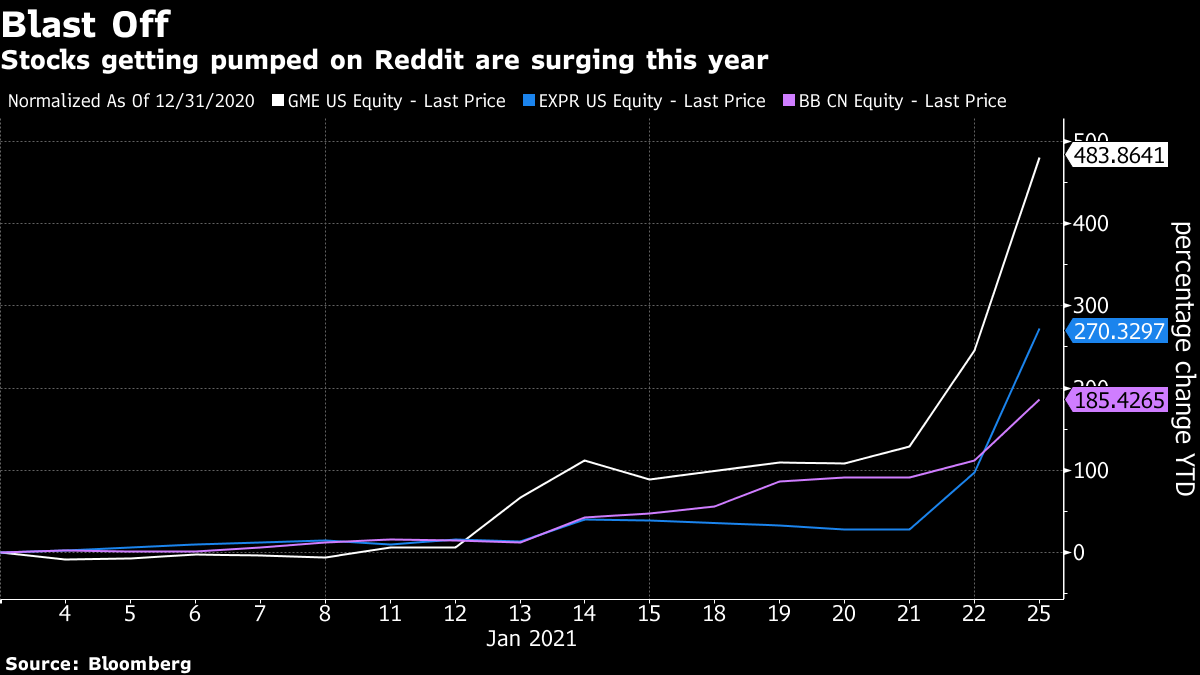 So what happens to stocks like GameStop or others that have surged in recent days, and what does all this mean for the way markets work?

Short squeezes do have a tendency to stop abruptly. The most famous squeeze of the millennium – which also involved lots of option-based shenanigans – was Volkswagen AG's brief move to become the world's most valuable company back in 2008. It didn't last very long. 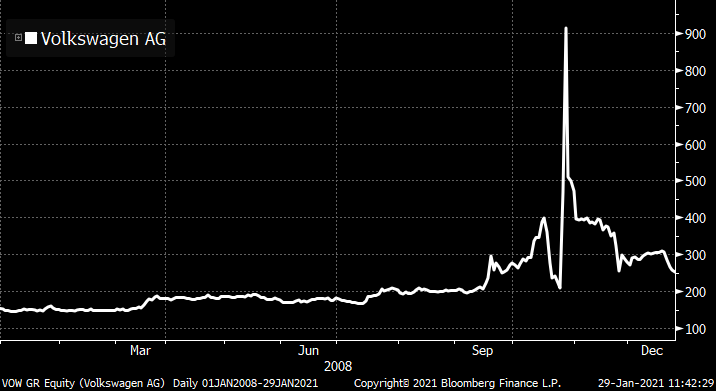 But markets have also changed dramatically in the past few years. The emergence of no-commission trading through platforms like Robinhood Markets Inc. and the popularity of online forums and social networks mean that trading is more accessible than ever before. So a squeeze could go on for longer than a lot of people on Wall Street might expect. Options in particular have exploded in popularity.

Markets always change. New technology emerges. New products become available. New trends become hot. Old ones are discarded. Prices reach an equilibrium. Things that may be cheap or free now — like buying lots of call options on stocks — can get repriced. Regulators might choose to take action, though it's unlikely there would be much public support for any moves that could be seen as protecting big investors at the expense of small retail ones.

In the meantime, we're already starting to see Wall Street and markets adapt to the wild week that was. There are signs that hedge funds are bailing out of their short positions even before the retail army turns up, taking a small loss now for fear of a larger one later. Meanwhile, the chat forums are already looking for the next stock to send to da moon.

How WallStreetBets Pushed GameStop Shares to the Moon
Reddit Crowd Bludgeons Melvin Capital in Warning to Industry
Robinhood Users Are Furious Over Its Stock-Trading Clampdown
GameStop Mania Goes Global as Retail Traders Gang Up on Shorts
Odd Lots: How One Investor Made The Score Of A Lifetime On GameStop
In 11 Hours of Pure Mania, 100% Stock Gains Popped Up Everywhere
Matt Levine's MoneyStuff: How Will the GameStop Game Stop?
QuickTake: How ‘Flows Before Pros’ Is Disrupting Stock Markets
Silver Is the Latest Market Hit by Reddit Day-Trader Frenzy
Why Reddit Loves Elon Musk, Cathie Wood and Chamath Palihapitiya
Should You Buy GameStop? A Guide for the Uninitiated Investor

Subscribe to get unlimited access to all our markets mania coverage on Bloomberg.com, where the GameStop analysis never stops.