As this newsletter hits your inbox, President Joe Biden will be convening his Leaders Summit on Climate, to which the White House has invited 40 world leaders to “galvanize efforts by the major economies to tackle the climate crisis.” Biden is expected to announce plans to reduce U.S. greenhouse gas emissions by at least half from 2005 levels by 2030, a near-doubling of the climate target set for 2025 by the Obama administration.

Among the summit’s goals are “mobilizing public and private sector finance to drive the net-zero transition”—that is, making sure the world’s biggest financial institutions provide the trillions of dollars of investment capital needed to transform carbon-intensive industries.

Certainly the private sector has been making noise about its climate finance ambitions. There are almost too many major announcements to count, but those of note include:

You will note something about those four announcements—they’re all from very large, diversified banks with global footprints. Diversified banks are worth watching not just because they’re big, but also because they do everything: asset management, debt underwriting and equity raising, investment banking, commercial banking, and retail activities. There aren’t very many of them—Bloomberg tracks only 22 with market capitalization greater than $10 billion as of the end of last year—and they’re quite a stable cohort.

These banks have set their commitments over a long time span. Three decades from now is well past when any current chief executive can be expected to still be in place—meanwhile the hard part will be the tail end. It’s relatively easy to invest trillions in new zero-carbon initiatives. It’s much harder to decarbonize a portfolio and rotate out of high-emitting holdings while also investing in assets that remove carbon from the atmosphere.

Of course, these announcements could just be noise meant to curry favor with one constituency or another. So how should we evaluate them? One way is to put these big bank priorities into context over time, using Bloomberg data to analyze banks’ past public statements on climate. 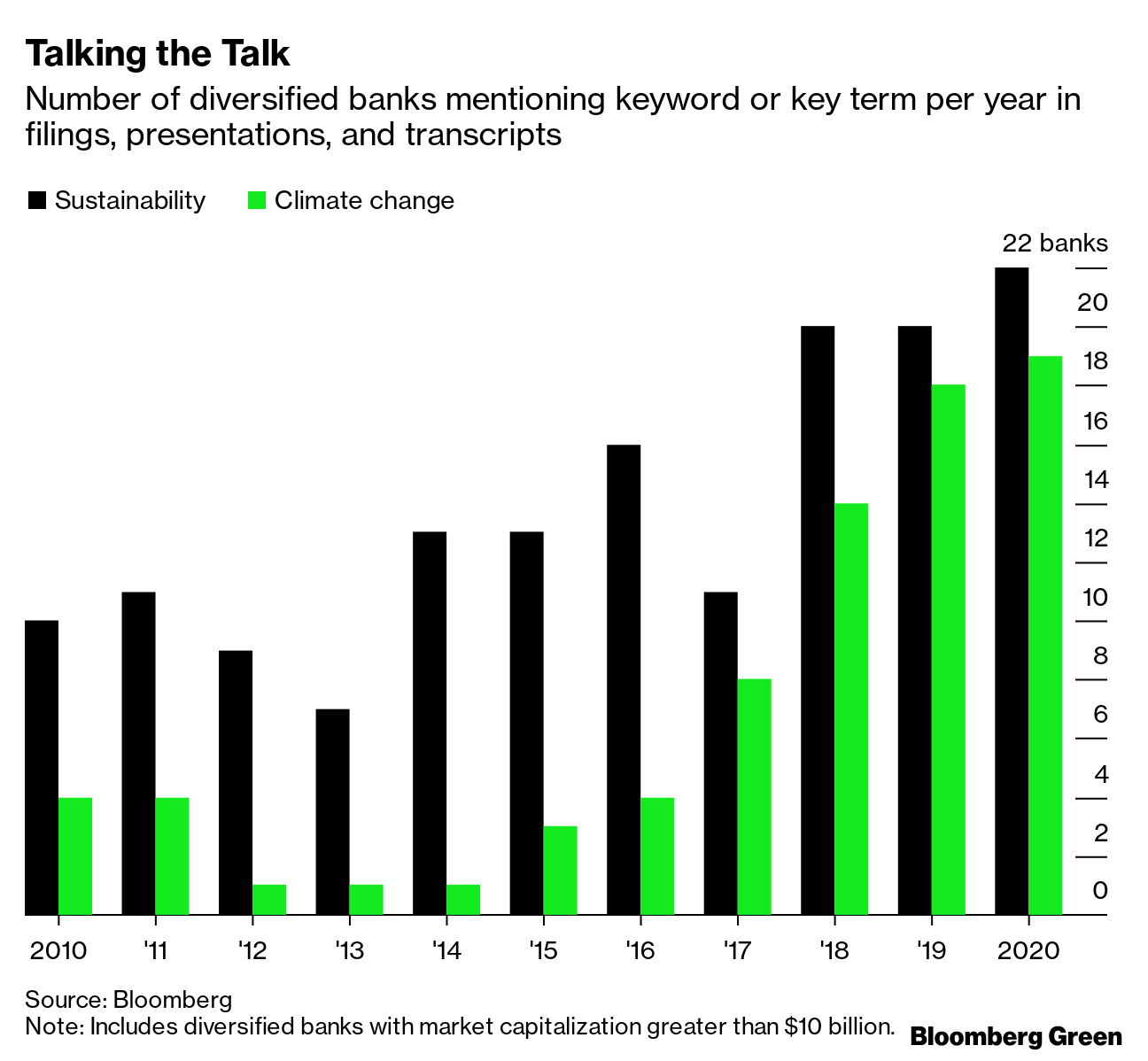 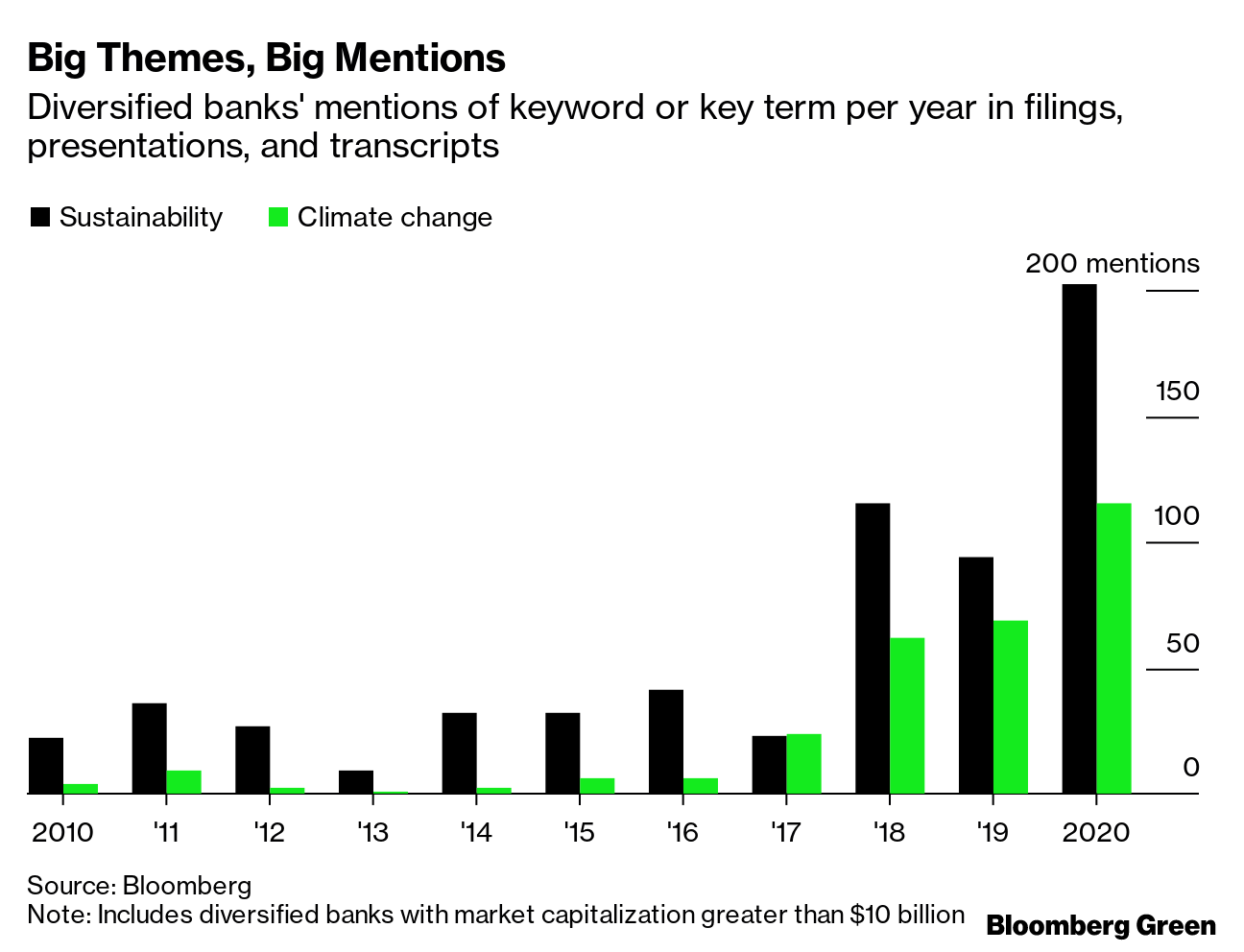 Let’s drill down into one specific institution: JPMorgan Chase & Co. Its longtime chairman and chief executive officer, Jamie Dimon, has been writing an annual letter to shareholders since 2006, so we have 15 years of statements to analyze. (Last year’s letter was a record 66 pages long, so we’ll adjust for mentions per page.)

What we find, similar to the other big banks, is occasional early mentions of “sustainable” and “climate,” although early on they’re more about sustainable financing activities than financing sustainability. After that comes a long mid-decade drought before a slow ramp-up in sustainability mentions. Last year’s featured a spike in both sustainability and climate mentions, on about one of every five and one of every seven pages, respectively. 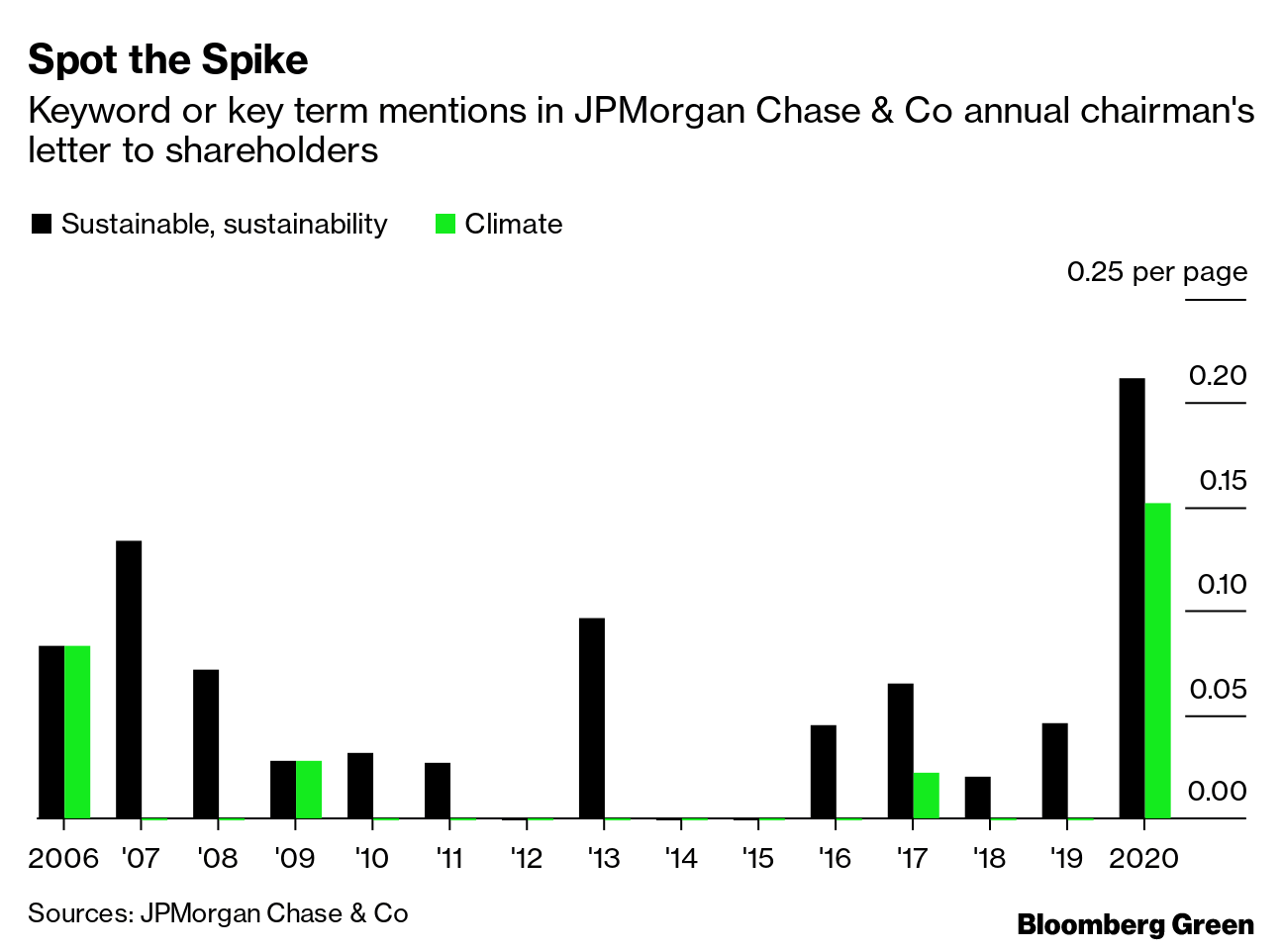 That tracks with the rest of the big banks. Interest soared last year, with Covid-19 enhancing climate pledges rather than dampening them. Dimon and his peers have made commitments in the last few months that, in theory, obligate them to decades of capital allocation and portfolio transformation. Already, the U.S. Securities and Exchange Commission is tightening oversight of financial institutions’ climate-related risk and marketing of ESG products.

Mentioning these terms is, if not exactly costless, then at least not particularly costly. Turning those words to action over the next decades is by far the harder part. It’s now incumbent upon all of us—as institutions, politicians and policymakers, fiduciaries, and individuals—to ensure that the big banks carry out what they’ve promised. A chief executive’s stated strategy on climate should be measured in every board meeting. Institutional investors should make it one of their queries in every shareholder gathering. Leaders should be noted, and laggards—just as importantly—should be called out, too.