When the Money Gusher Ends

We can all agree it’s a good thing the pandemic’s crushing blow to the economy didn’t close all the businesses and put everybody in bread lines. But there’s no such thing as a free recovery, say people who don’t want us to have any fun.

For example, the Fed’s money printer going brrr all the time has kept countless companies from going bankrupt, writes Lisa Abramowicz. The downside is this has also kept alive countless companies that might be better off no longer existing. These living-dead businesses, along with the heaps of debt all companies have been larding on, will make the economy sluggish and zombie-like.

The best thing for the Fed to do right now would be to start at least watering down the punch in the punch bowl, writes John Authers. Yes, of course, investors will whine, as they do. But any parent can tell you it’s far better to deal with some whining now if it avoids a spectacular meltdown by a thoroughly spoiled market later, probably in the middle of the grocery store while that mean gossipy neighbor is watching.

The worry here is that the market is already so far gone that any hint of pushback from the Fed will mean an epic collapse of speculation, warns Jared Dillian. One worrisome sign is the fact that Dogecoin — which, we cannot stress enough, began as a joke — was recently worth $50 billion, or more than Ford Motor Co., just for the lulz. You might want to go ahead and locate the exit nearest you, or at least something to fight off the zombies.

Our Next Big Vaccine Hurdle: The Youths

We can’t vaccinate our way to herd immunity without vaccinating children, writes Clara Ferreira Marques. But parents who might have been willing to get jabbed to avoid Covid may be less eager to have the same thing done to their children. Many believe the risks are nearly zero for kids, making possible vaccine side effects much less acceptable. They’ve got the risk/reward balance all wrong, but somehow we’re going to have to convince them of that.

Older kids and young adults will have similar concerns, writes Lara Williams. Scope out where those darn kids gather in your town, and you’ll see little evidence of anxiety about coronavirus, or any other germs for that matter. Unfortunately, these youths are natural superspreaders, so we’ll need to find a way to convince them to get jabs, too.

Further Pandemic Reading: The tragedy in Narendra Modi’s India shows how the spell cast by demagogues overwhelms even their rank incompetence. — Pankaj Mishra

We’ve become accustomed these days to the outrage-boycott-repercussion cycle, wherein some corporate misdeed will inspire a consumer revolt, followed by heads rolling and perhaps even half-hearted apologies. Fox News made these rounds four years back, when some of its personnel were accused of sexual misconduct, sparking an advertiser backlash that ousted its biggest star. But the company seems to have grown immune lately. Now its biggest star is Tucker Carlson, host of a White Grievance Hour so odious it has chased off almost all advertisers but the My Pillow guy. Tim O’Brien explains Rupert Murdoch & Co. are much more OK with this state of affairs than you might think. Fox still makes plenty of money because cable providers pay it for the privilege of carrying it. And reinforcing its audience’s worst instincts keeps them coming back to all the other Fox shows where advertisers still dare to tread.

Investors are freaked out about Netflix not adding as many subs as they hoped in the latest quarter, but Tara Lachapelle writes they should actually be glad about the ones it’s keeping. 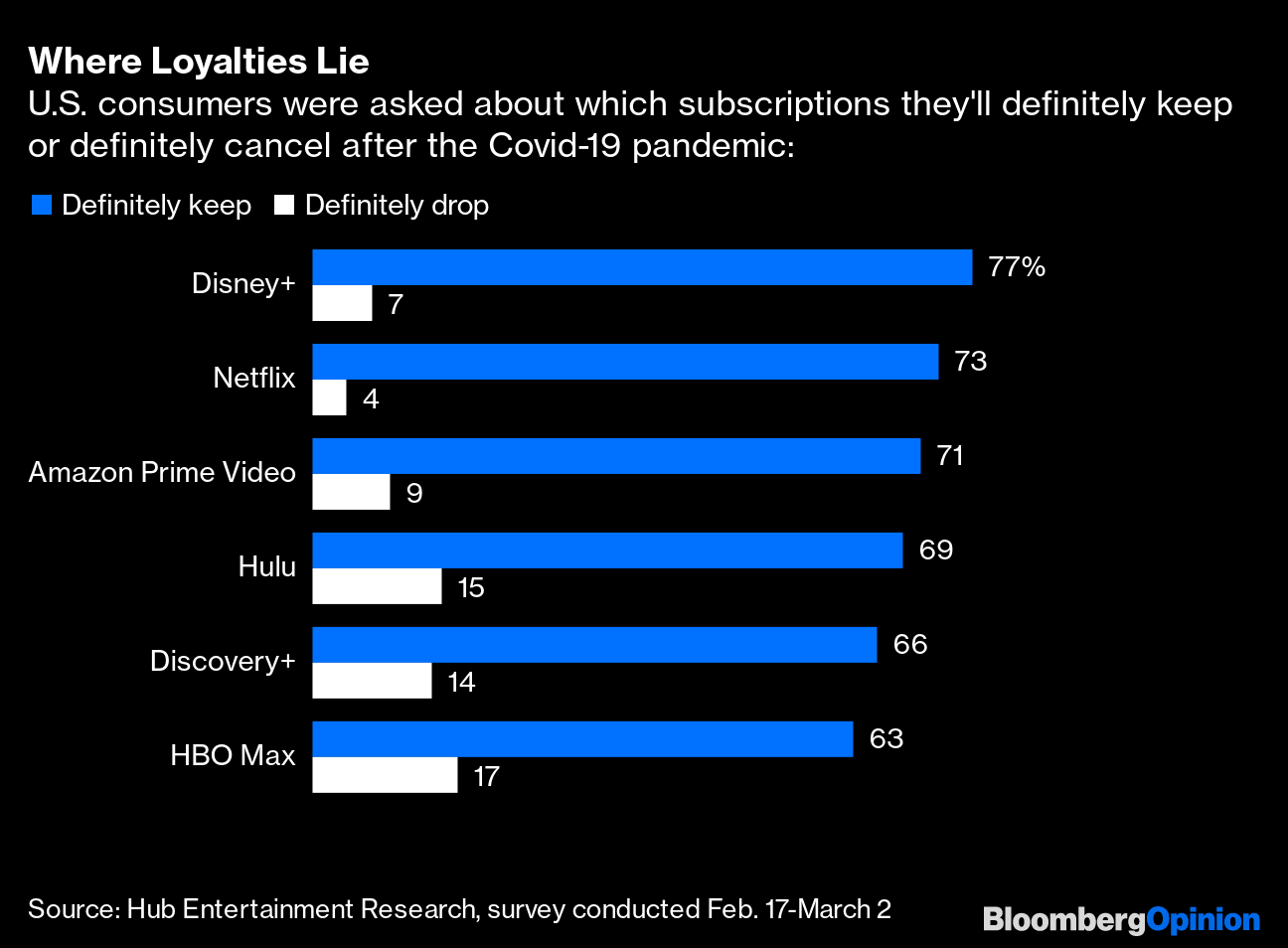 European banks lag Wall Street in everything except issuing green bonds. Unfortunately, given all the green (get it?) to be made in green bonds, even this lead won’t last, writes Mark Gilbert. 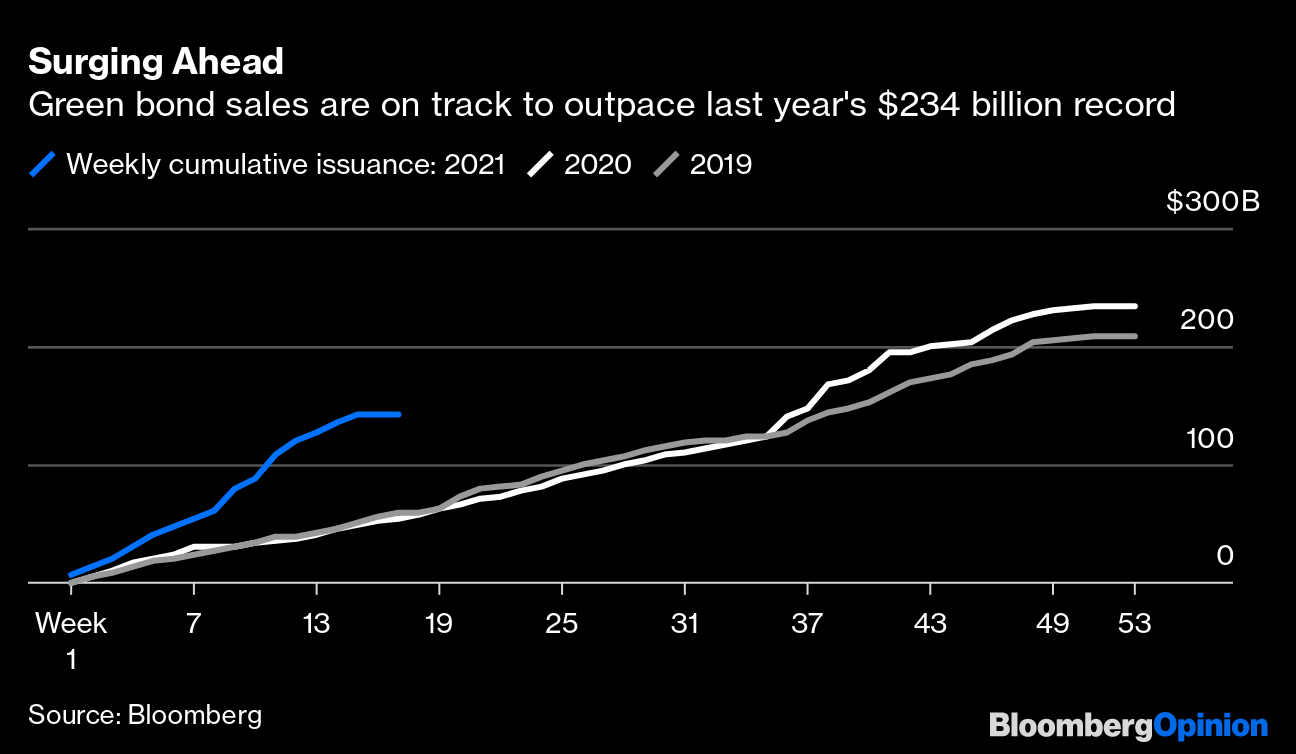 We shouldn’t ascribe too much meaning to the Derek Chauvin verdict. Real change will take time and more effort. — Noah Feldman

President Joe Biden is helping the cause of marijuana legalization by staying out of it. — Jonathan Bernstein

Markets have priced in an airline recovery too soon. — Brooke Sutherland

Soccer’s Super League may be dead, but the money problems inspiring it are still alive. Fixing them will require super-sacrifices. — Alex Webb

Summer vacation rentals are going faster than usual. Here are some spots where you can still book. — Alexis Leondis

Europe has finally picked up the vaccination pace.

Robinhood made trading too easy.

Your boss can read your Gmail drafts.

Sleeping less than six hours a night boosts your risk of dementia.

Behold the culture of whales.