Welcome to the Weekly Fix, the newsletter that would back a moratorium on investment outlooks for the rest of 2020 and possibly beyond. –Emily Barrett, FX/Rates reporter.

Lashed by the Curve, Again

For every skeptic about the resilience of the U.S. Treasury market in the face of record supply, there’s this reality check. Yields have stayed low, while stocks have plotted a swerving upward course through a rocky economic reopening and resurgence of Covid-19 cases.

That bond market sang-froid held as the Treasury sold about $94 billion of notes and bonds this week. On Thursday, the Treasury’s offer of 30-year bonds sold like hotcakes, triggering a rally that drove long-end yields to their lowest point in two months. And that would have scorched the many fans of the curve steepener trade. 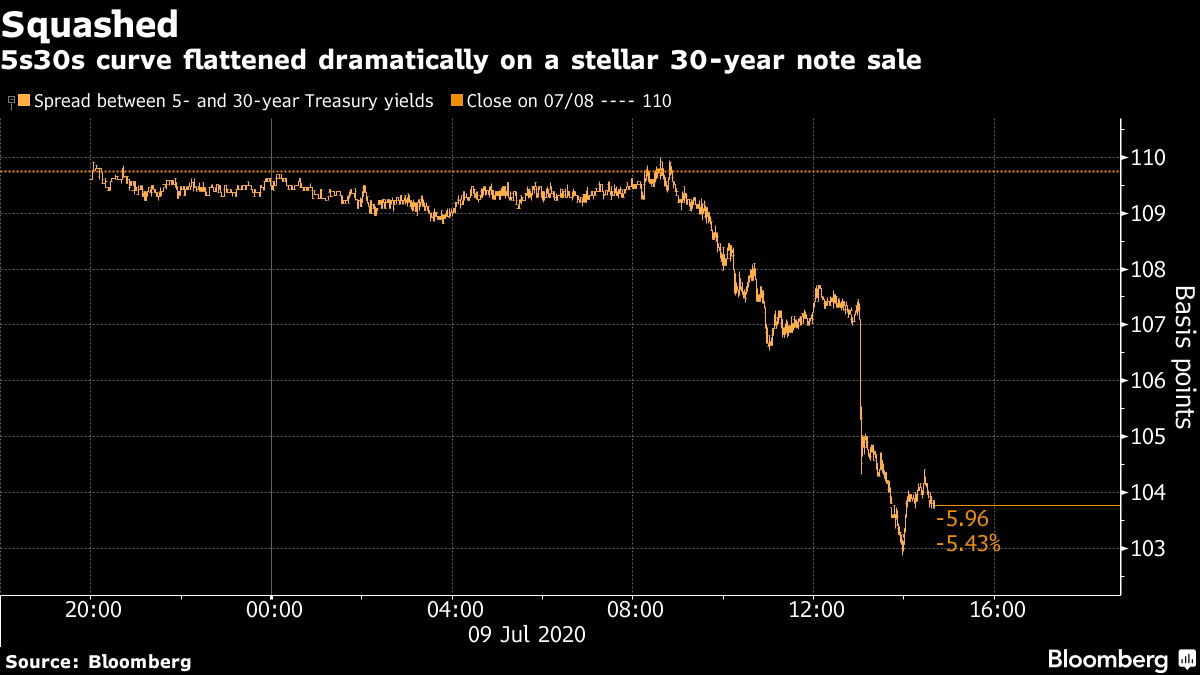 Apparently, you just can’t bet against investor appetite for U.S. government bonds — at least not in the midst of a pandemic. Atlanta Fed President Raphael Bostic warned Thursday that real-time data suggest the recovery is flattening out, possibly warranting more monetary or fiscal action.

The steepener trend seemed well entrenched from March to early June, when the spread between five- and 30-year Treasury yields gapped out to more than 120 basis points. It flourished on the view that near-zero interest rates would pin yields at the front of the curve, while a combination of massive government borrowing and a modest economic recovery would lift the long end.

But there were signs the trade was getting overstretched. At the end of June, JPMorgan strategists consulting their active core bond fund manager index saw exposures had reached “levels not seen since the Fed’s dovish pivot in early 2019.” JPM also indicated that successful bets on a steeper curve were largely responsible for the comeback performance of these funds in the second quarter, which saw their best excess returns in eight years.

That didn’t stop JPM backing the 5s30s steepener, and it doesn’t mean that all bets are off now. BMO Capital Markets’ strategists were sticking to their call after the auctions, though with a warning not to expect any impetus from the next crop of inflation data.

“Eventually, a steeper curve will reemerge as the path of least resistance, but for the time being we’ll respect the price action,” BMO’s Ian Lyngen wrote.

The Fed’s balance sheet has become one of the greatest preoccupations in financial markets. But as of this week, it looked a tiny bit less stupendous.

Assets have dipped below $7 trillion for the first time in almost two months. The $88.3 billion drop in the week to July 8 was the fourth in a row — taking the total decline over the last month to almost $250 billion.

That past month’s decline has owed mainly to the declining usage of the Fed’s emergency services — the repo and dollar swap facilities it rolled out for primary dealers and foreign central banks at the height of the market turmoil in March and April.

Barring any more dramatic developments, the period to month end could well see a little more shaved off the Fed’s ledger, as more than $110 billion of currency swap lines will mature. The major participating central banks, including the Bank of Japan and European Central Bank, have been allowing them to roll off as their local institutions are no longer clamoring for dollars. 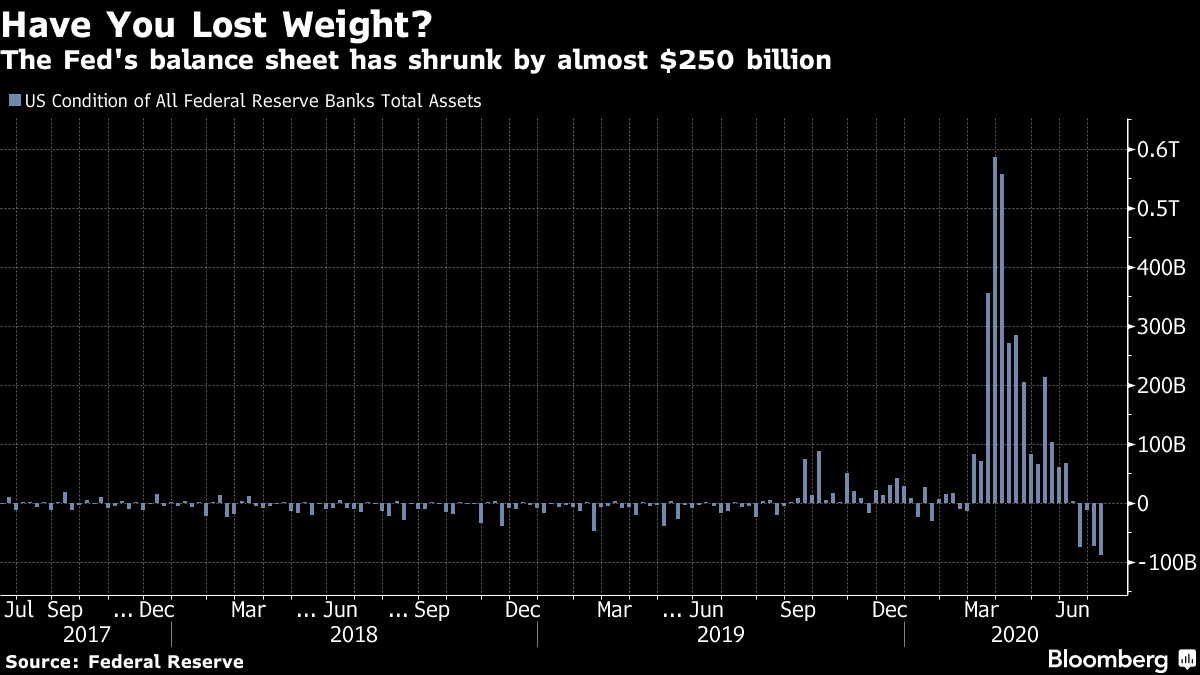 This is part of the Fed’s success story in stabilizing markets. It headed off a threatened dollar liquidity crunch, and it has effectively weaned dealers off its repo operations, having made them a tad more expensive last month. For the first time since September, the Fed this week could say it had no funds outstanding in these facilities — a far cry from March, when the central bank offered as much as $5 trillion to put out the fire in funding markets.

A drop of a couple of hundred billion and change in the Fed’s balance sheet might not look like much here. But it’s a bit of perspective for the bond market, which back in 2013 threw the mother of all tantrums when then-Chairman Ben Bernanke dropped a hint about slowing post-GFC asset purchases. The actual balance sheet taper is barely discernible here, extending from October 2017 to mid-2019.

The next taper talk — if it ever comes — will be a doozy.