Welcome to the Weekly Fix! I’m cross-asset reporter Katherine Greifeld, and I’ll be guiding you through this week in fixed-income markets while Emily Barrett takes a well-deserved vacation.

It’s officially earnings season, and the big banks kicked it off with a bang. Second-quarter reports were expected to be anything from confusing to shocking for financials. One thing quickly became crystal-clear: it’s boom-time for bond traders. A flurry of debt deals against a choppy market backdrop boosted Citigroup Inc.’s fixed-income, currencies and commodities trading revenue by 89% last quarter, while JPMorgan Chase & Co. posted an awe-inspiring 120% gain versus a year ago. Goldman Sachs Group Inc. took the crown with a 149% surge, shattering estimates.

The bond trading bonanza and debt underwriting generated over $20 billion for that trio — effectively a $10 billion windfall over the average quarter for those businesses for the last four years. In particular, Goldman’s results were so good, they were “almost indecent,” said Opimas Chief Executive Officer Octavio Marenzi, while highlighting the extent to which the Federal Reserve’s intervention in credit markets benefited investment banks. The Fed’s emergency policies are designed to cushion the economic blow from the coronavirus and keep financial markets functioning. But they have raised the question as to whether they may end up fueling inequality. Such a strong showing from Wall Street’s stalwarts could add fuel to that particular fire.

The second-quarter will likely be the high-water mark for FICC trading. Underwriting volumes “will definitely come down,” JPMorgan CEO Jamie Dimon told analysts on a conference call. “All this capital is not being raised to go spend. It’s being raised to sit on the balance sheet so that you’re prepared for whatever comes next.” 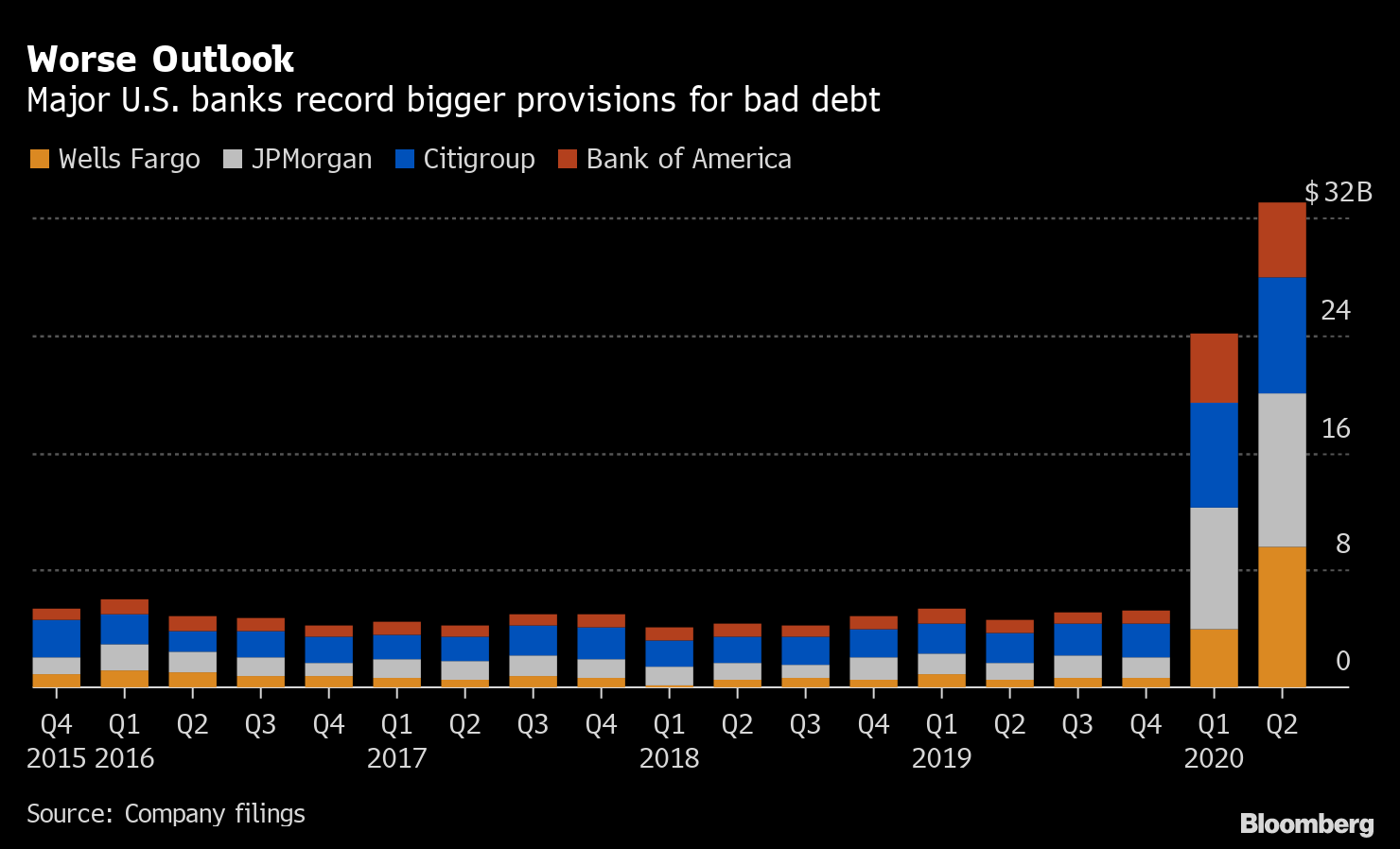 And if you’re looking for a catch, it isn’t hard to find. JPMorgan Chase, Wells Fargo & Co., Citigroup and Bank of America Corp. were among those earmarking a combined $35 billion from their profits for provisions for bad loans, a sobering reality check that the economic outlook is still decidedly grim.

That’s a worrisome signal for credit markets, given that the big banks are a crucial source of funds, according to Peter Tchir. “Whenever you see loan loss provisions increase, it tells you they’re going to be a little bit more conservative,” said Tchir, head of macro strategy at Academy Securities. “For spreads to tighten significantly from here, we’d need to see banks get a little bit less conservative and get a little bit more comfortable on their loan-loss provisions.”

U.S. government bond investors are taking stay-at-home guidelines to a new level. Domestic buyers are more important than ever, with the U.S. Treasury on track to sell an unprecedented sum of nearly $5 trillion in new debt this year. American money-market funds have bought the brunt of the roughly $2.2 trillion worth of bills issued so far. That’s in contrast to the Fed, which has concentrated its purchases in longer maturities.

Robust domestic demand is good news for Secretary Steven Mnuchin. China — the second-largest foreign holder of Treasuries — has been shrinking its pile over the past few years, while international demand at auctions has plateaued. 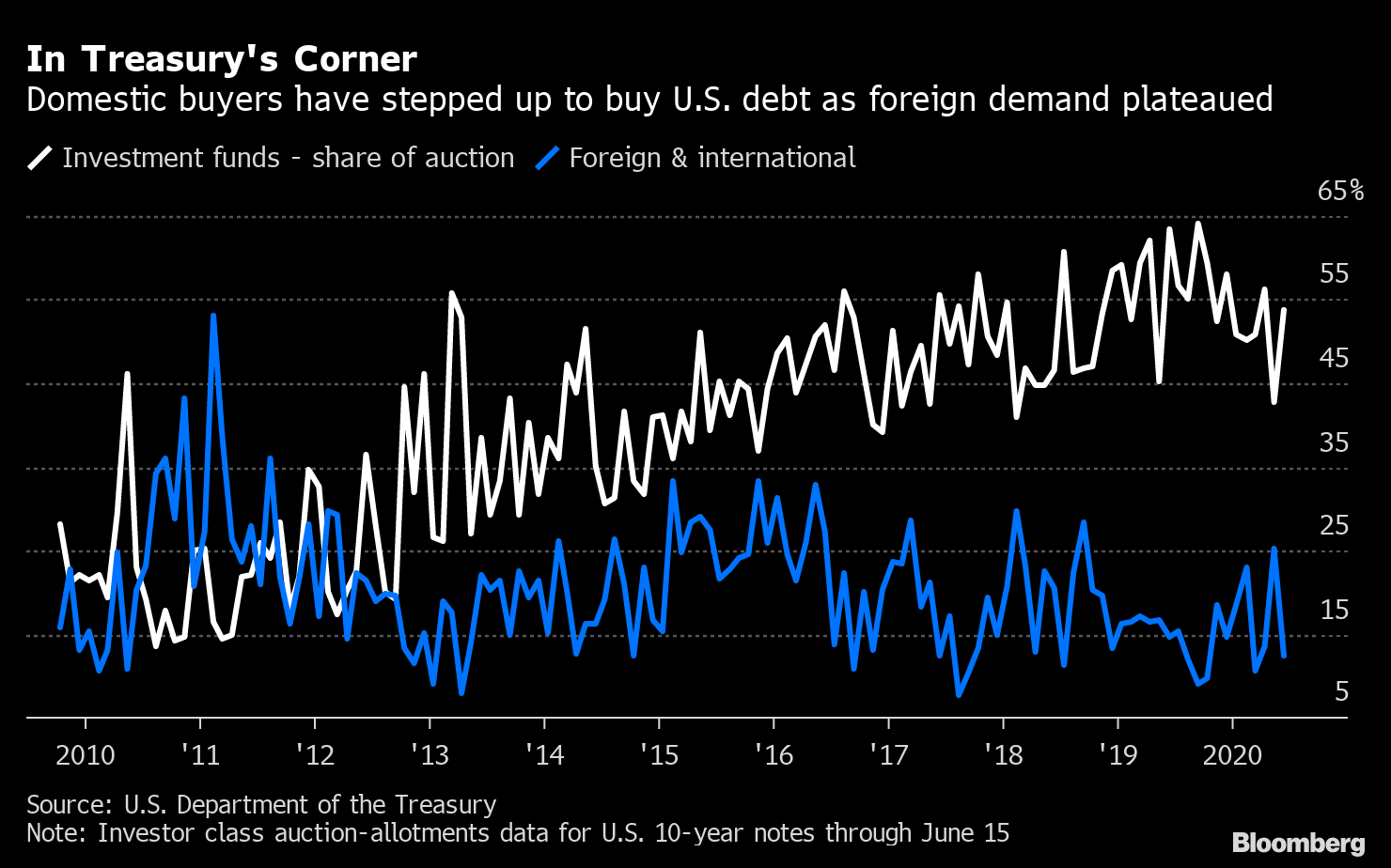 Not even the highest currency-hedged yields in years have enticed foreign investors back into the fray. For the first time since 2018, Japanese and European investors hedging out currency risk are able to pick up positive Treasury yields. Until recently, hedging costs were sky high — a product of U.S. short-term rates being far above those abroad — meaning that currency-hedged overseas buyers of Treasuries faced deeply negative yields.

That hedging expense has collapsed after the Fed slashed rates to near-zero. For yen-based bond buyers, a hedged 10-year Treasury note yields around 0.15%, after touching a two-year high of 0.35% last month. That compares to minus 1.54% in mid-March. European investors saw a similar phenomenon: Euro-hedged 10-year U.S. yields briefly turned positive last month, after sinking as low as minus 1.31% amid March’s turmoil. 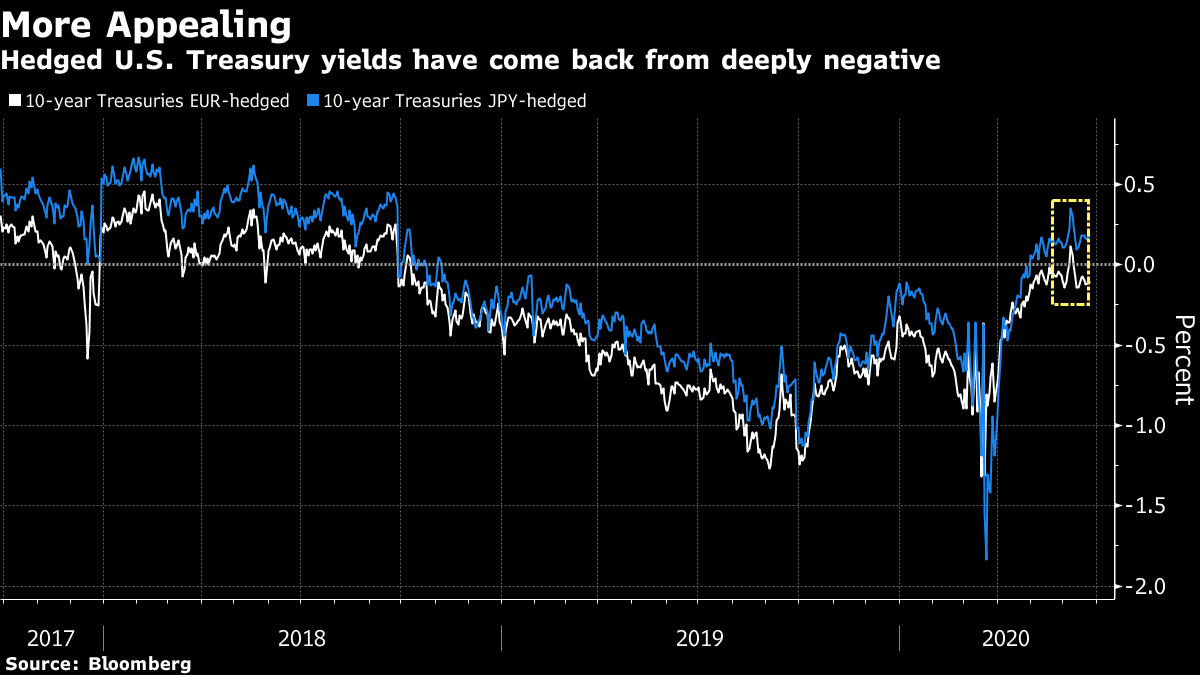 The tepid demand from abroad is likely because the yield differential between Treasuries and other developed-market bonds has collapsed as a result of the Fed’s rate cuts, eroding any carry pick-up, according to AlphaSimplex Group. The premium of unhedged benchmark U.S. notes over 10-year Japanese government bonds — which soared to over 300 basis points in late 2018 — has since shriveled to about 60 basis points. Yen-hedged 10-year Treasuries yield just 14 basis points more than Japan’s 10-year bond.

“The band between the two has narrowed,” said Kathryn Kaminski, chief research strategist and portfolio manager at AlphaSimplex. “That’s something that could actually decrease people’s demand for U.S. bonds.”

The growing presence of exchange-traded funds in fixed-income investing is set to nearly double — or so says the world’s largest money manager. BlackRock Inc. expects that global assets in bond ETFs will soar to $2 trillion by 2024, from roughly $1.3 trillion currently. Much of that growth will be fueled by institutional heavyweights such as pension funds and insurers, who have long been skeptical of the products, the firm said in a report this week.

Traditional fixed-income investors have started to embrace bond ETFs in the aftermath of March’s market turmoil, BlackRock said. Soaring volatility froze trading across bond markets in March, zapping liquidity in an asset class where individual securities may not change hands for days even in normal times. Bond ETFs kept trading throughout, providing a release valve of sorts and solidifying their place in institutional portfolios, according to Carolyn Weinberg, iShares global head of product.

“We needed a market event for some of the skeptics or institutions who theorized that they wouldn’t work to show and demonstrate that ETFs are important and critical tools,” Weinberg said by phone this week. “It’s more challenging and likely more costly to find the individual bonds quickly and buy them in a time of market stress.” 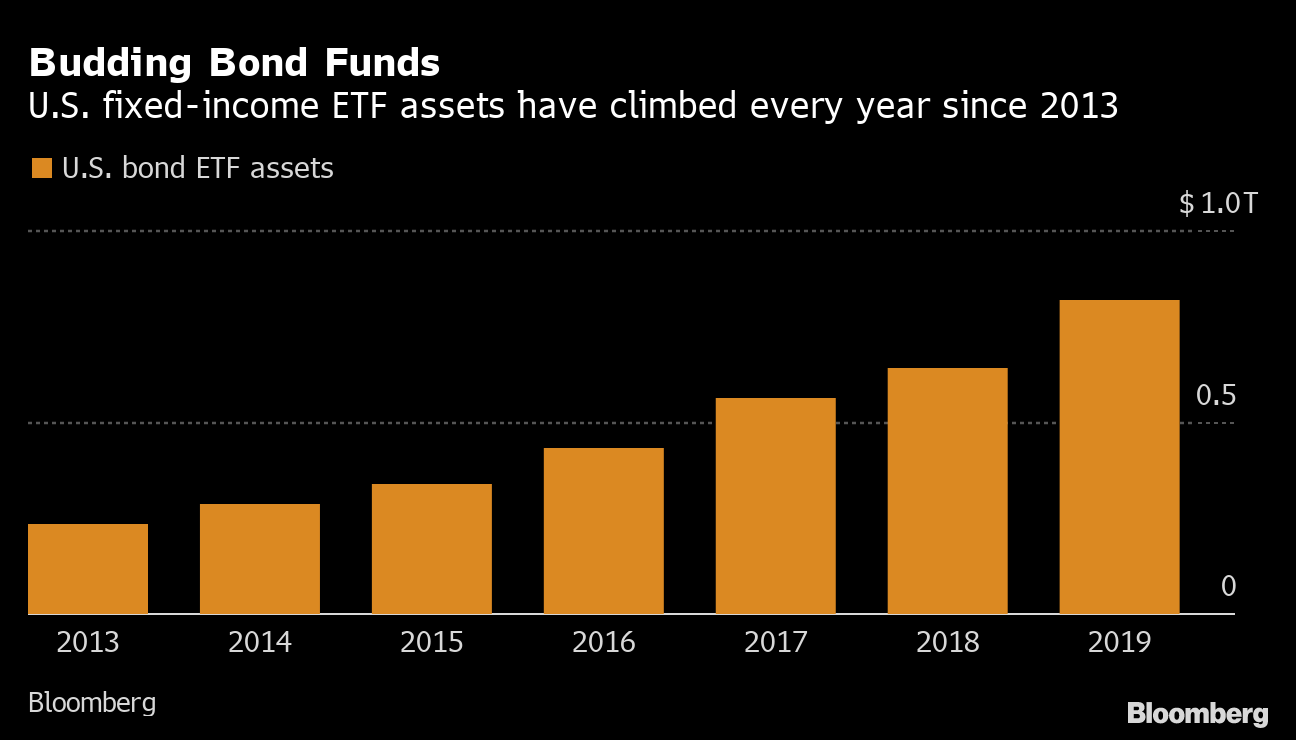 Bond ETFs are booming in 2020, helped in no small part by the Fed’s implicit endorsement of the structure after the central bank began buying the products as part of its coronavirus response. Fixed-income ETFs have attracted nearly $112 billion in inflows so far in 2020, putting them on track to smash 2019’s $150 billion haul, according to data compiled by Bloomberg. Meanwhile, equity ETFs have absorbed just $70 billion this year.

Treasury yields are ditching correlations left and right. After loosely moving in tandem with the S&P 500 for much of the year, rates on 30-year bonds have moved markedly lower while equities continue to grind higher.

The divergence is even more distinct in commodities — namely, the copper-gold ratio. Copper is regarded as a bellwether for economic growth, while gold is the classic haven play for investors seeking shelter. Given their opposing risk profiles, the two metals are often compared for a real-time read on the economic outlook. High-profile investors such as DoubleLine Capital chief executive officer Jeffrey Gundlach has said the gauge works “phenomenally well” as a short-term predictor of where Treasury yields are headed.

However, the ratio’s signal is cutting out as the Fed’s determination to keep interest rates low pins Treasury yields to historically low levels. Copper prices have surged roughly 50% since bottoming in March, fueled by rebounding demand in China and supply disruptions in South Africa. That has copper hovering near a four-month high relative to gold, even after the yellow metal rocketed to the highest level since 2011 this month. 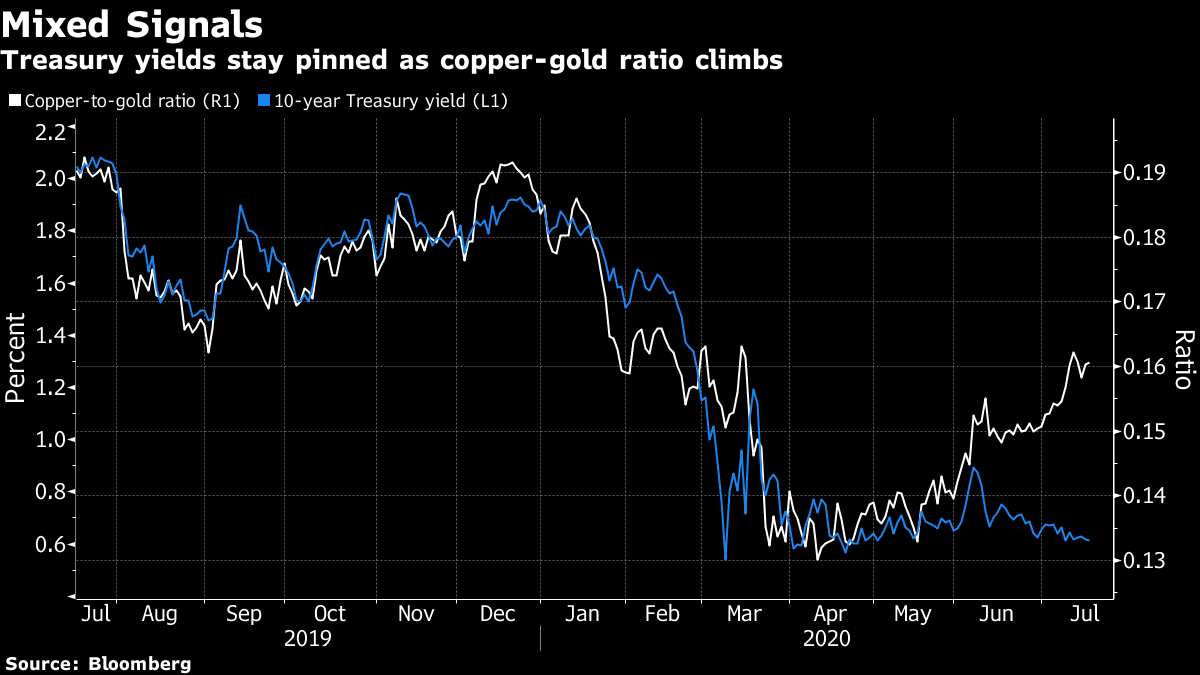 “The copper/gold ratio, which has done a very good job tracking the movement of yields over the last decade, suggests rates should be higher than they currently are,” wrote Bespoke Investment Group analysts in a note Thursday. “One interpretation of this chart is to argue that periods of extremely loose or tight monetary policy relative to what is needed (mid-2012 and current loose; mid-2018 tight) drive divergences.”

Correlations could be further upended should the Fed track toward yield-curve control. Federal Reserve Bank of New York President John Williams told Yahoo Finance on Thursday that it would be a tool in “a situation where we found that our forward guidance and other communications isn’t being as effective as we would like.” But that’s far from imminent — Williams said that the central bank has “some time to think” given that its current policy stance is serving the Fed well.

OP: Stocks Down, Worries Up