Just how well is Elon Musk’s electronic vehicle company Tesla Inc. doing? It is just over a decade since it went public, on June 30, 2010. Anyone who put $100 into the MSCI World Autos index at that point would now have $177; and anyone who put the same amount into Tesla would have $6,482. 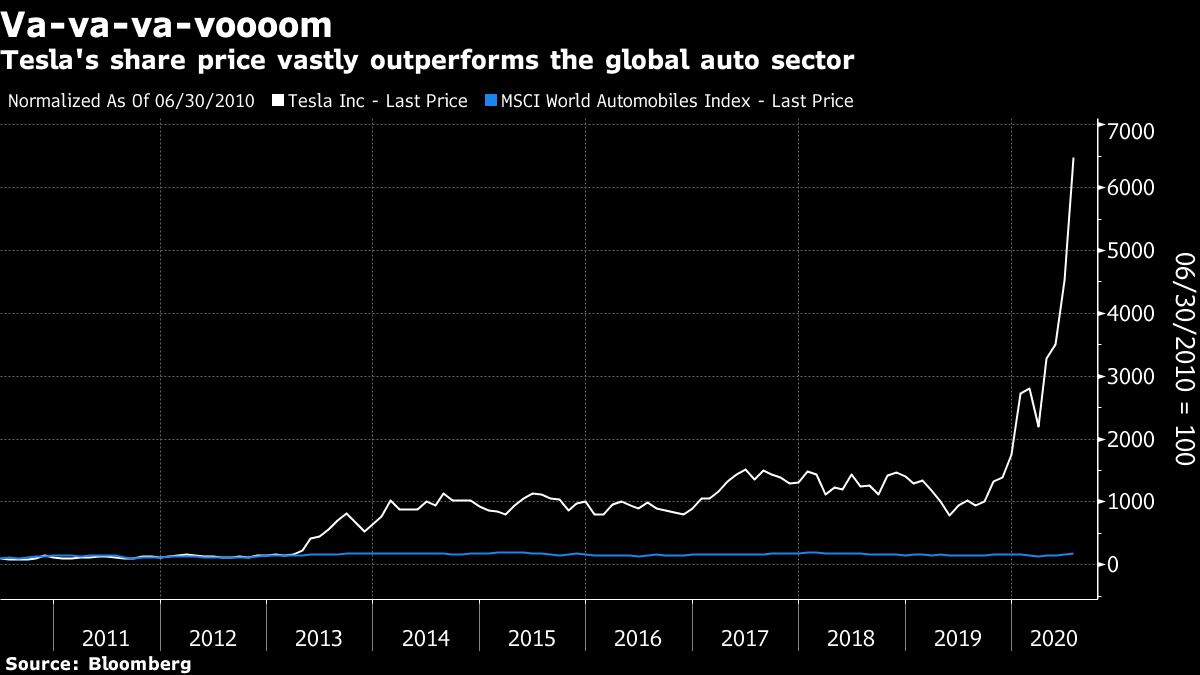 If we look at valuation, we find that Tesla is priced at 6,348 times its last year’s earnings. (That’s expensive.) Slightly more meaningfully, the stock is priced at 166 times next year’s earnings, 20 times book value, and seven times sales.  Toyota Motor Corp., the biggest auto manufacturer by market value after Tesla, sells for 61% of sales and 91% of book value.

For another indicator of how well things are going for Musk, whose net worth is largely dependent on the price of Tesla stock, he has now entered the top 10 of the Bloomberg Billionaires Index, where Friday’s rise in the shares was enough to take him past Warren Buffett. He is now sandwiched between the two Google founders, Larry Page and Sergey Brin:

Then look at Tesla’s scale compared to other automakers. This chart from Charlie Bilello, director of research at Pension Partners LLC, shows it’s regarded as occupying a totally different stratosphere from anyone else in the business of making cars: 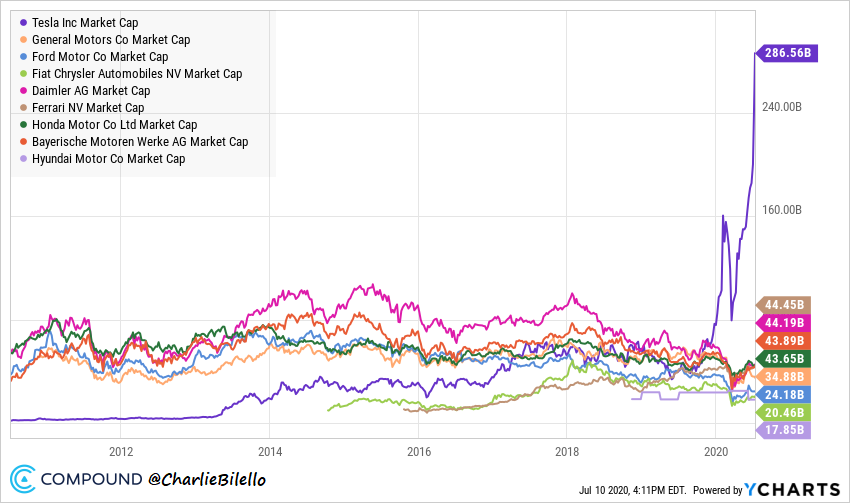 It is currently bigger than the eight other household-name auto manufacturers in this chart combined. Toyota isn’t included and is worth more than $200 billion, so it’s the only car company that Tesla hasn’t left completely in the dust.

Unlike companies such as Google or Netflix Inc., whose business models should be helped by reduced mobility and the lockdown, I don’t see that the coronavirus aids Tesla in any significant way. The pandemic tends to inhibit mobility, which is bad for auto demand, although it may cause more people to give up on public transport and buy a car. The oil price is historically low, which should make it harder to make the case for electric cars, although fuel is more expensive than at the trough in spring.

Tesla does make beautiful cars that give a smooth and quiet drive. Still, I don’t think anyone is claiming they have grown several times better during the first half of 2020.

So, Tesla is obviously in the grip of a speculative frenzy. Part of this is good old-fashioned mania. It has a sexy new product, with a sexy, high-profile CEO. But in a couple of critical respects the investment fever is a modern phenomenon.

First, it is guided in part by indexing, or an attempt to track what indexers are going to do. Tesla is a huge company but it has never yet made profits for four quarters in a row, and thus isn’t eligible for inclusion in the S&P 500, the world’s most tracked index. If it manages to show a profit for the second quarter, then it will have passed that threshold, and the committee that oversees the S&P 500 would probably add it to the index sooner rather than later.

Note that nothing is set in stone, as the S&P retains a fair amount of discretion. There were previous controversies over how long it took to include Google and Facebook Inc., and it will usually wait for other corporate events, such as mergers, takeovers or bankruptcies, before feeling obliged to add new entrants. This isn’t an index that can be safely “front-run,” but the profits for anyone who successfully does that, and holds Tesla stock before all the index trackers are forced to buy it, should be very good.

Note that “very good” doesn’t mean the returns would be enough to justify a tripling of the share price since the end of March. The overseers of the S&P 500 are in many ways the world’s most powerful stockpickers, but they aren’t that powerful.

Another important factor boosting Tesla is that so many are betting against it. Total money “shorted” is now above $20 billion, the first time any company has suffered such heavy speculation against it. As Tesla doesn’t have a large outstanding float, this means that shorts capitulating and buying back stock help to push the price up further. Some even happily buy the stock on the basis that they can lend it to short-sellers at huge rates of interest.

Tesla also benefits from great excitement among retail investors, although this can be overstated. Even Robinhood traders realize that it may not be a good idea to buy a stock this expensive. Tesla appears 11th on Robinhood’s leaderboard, with 408,000 owners. To put that in context, it is one position below a company called Aurora Cannabis Inc., which is down 92% from its high (pun unavoidable) in early 2018. And the most popular Robinhood stock is Ford Motor Co., the very type of company that Tesla is supposed to supersede. Robinhood’s merry men seem far more interested in picking up unpopular deep value plays than getting embroiled in a bubbly company like Tesla (the chart ranks stocks by number of owners):

Now comes the tricky question — is it a bubble, and should we care about it if it is? I draw your attention to this excellent essay by Louis Gave of Gavekal Economics, who argues that there is no broad bubble in global equities (I am sure he is right about this), but that there may well be one in “big tech.” He has a very useful taxonomy, which views global stocks as split into four groups since Covid-19 hit us. Beyond big tech, there are “Covid victims” (pounded for a while, then resurgent, now slipping back into trouble), “bond proxies” such as consumer staples, which did well for a while and have gone nowhere recently, and “cyclicals” (including emerging markets), which have picked up in recent weeks. It is only in big tech that there is any discernible bubble and, as Tesla makes clear, it does look very bubbly.

How dangerous is it? It is relatively localized for the time being, it has been funded primarily by an over-lenient central bank, and is centered in assets perceived to have scarcity value. Many big tech companies have true monopoly power at present, and their valuations assume they will keep it. (To apply this to Tesla, money is put to work on the assumption that the company will always and forever be the only electric vehicle manufacturer; if the technology takes off, that will prove wrong.)

There is money in big tech, and a bursting of the bubble would hurt. But it need not be that painful. And if the dollar weakens on cue, then Gave makes the point that there could well be another big bubble in China and emerging markets to replace it. For now, brace for markets to stay Elon-gated.

Earnings season is about to get started in earnest, with PepsiCo Inc. on Monday, to be followed by a slew of banks. Netflix’s update on how many people kept subscribing to its service during a quarter dominated by lockdowns could be one of the highlights of the week ahead. However, in general, this is probably one of the less important earnings seasons, at least when it comes to the numbers. If anyone really cared about how much money companies pulled in during the second quarter, there is no way that the stock market could possibly be this strong.

To illustrate, this chart shows Bloomberg’s estimate of S&P 500 earnings for the whole of 2020 on one axis, and the multiple of those profits at which the S&P is trading on the other: 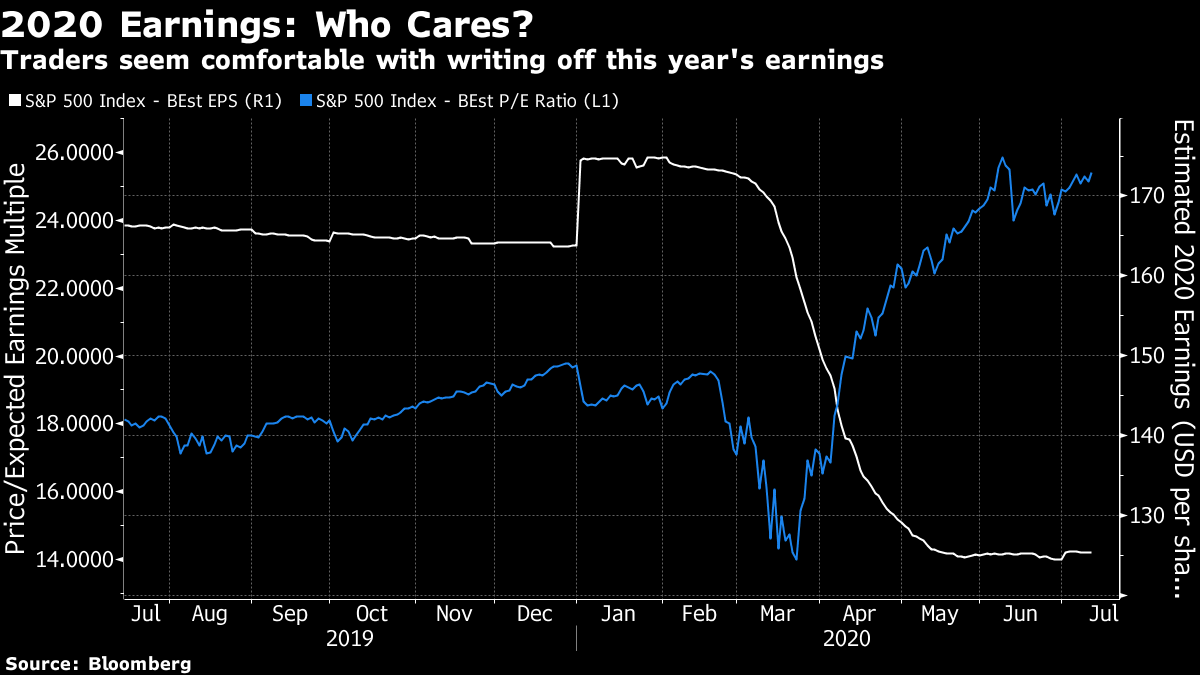 What executives tell us on earnings calls about how their businesses are reshaping to deal with the pandemic, and how they see the future, could matter an awful lot. The stale game of trying to produce an earnings “surprise” should count for less than usual. And that is something for which we can be thankful.

This survival tip incorporates a tribute to a dearly loved friend. To get to the point, don’t ignore Facebook altogether.

I say this because I learned last week of the passing of Jo Tuckman, with whom I shared an office when we were both expatriate British journalists in Mexico City. She died last week after a fight with cancer of several months. She was 53, and leaves two children in their teens. A superb chronicler of modern Mexico, its delights and its intractable problems, she broke one of the most significant Mexican political scoops of recent times here. She also wrote what is still perhaps the best account of how the country failed to move forward after the apparent breakthrough when the hegemonic Institutional Revolutionary Party at last lost a presidential election in 2000, after 71 years in power. I strongly recommend her Mexico: Democracy, Interrupted.

The pain of bereavement is about far more than her professional achievements, though. Jo was one of my family’s closest friends during an important part of our lives. I have spent the last few days digging up photos of our then very young daughter playing with hers in Mexico City. She mattered to us. As life has been busy enough where I am, and we haven’t made it back to Mexico for a few years, I had no idea that she was ill.

This is where Facebook comes in. Like many people, I am reducing my time on it to a minimum. At this point, it is full of toxic content, and can become a huge waste of time. But if I’d been checking in regularly, I would have known about the appeals for blood donations as Jo faced surgeries, and I could have read the (relentlessly cheerful) posts of her last few months. The site is now serving as a great host for many of us to try to deal with the sense of loss and unfairness. In short, I wish I had checked Facebook more often.

There are reasons why people liked Facebook so much in the first place. If we (and its management) could find a way not to throw the baby out with the bath water, that would be good.

Like Bloomberg’s Points of Return? Subscribe for unlimited access to trusted, data-based journalism in 120 countries around the world and gain expert analysis from exclusive daily newsletters, The Bloomberg Open and The Bloomberg Close.

Protected: Premium OP: A Whole Lot of Shakin’ Goin’ On