Bloomberg: Recovery Profits Are Hot. So Is Inflation Chatter

There’s good news from first-quarter earnings season. So far, expectations of a swift and impressive rebound from the pandemic have been amply fulfilled. With about a quarter of companies in the S&P 500 having reported, it looks as though the market didn’t get too far ahead of itself.

That said, the limited positive reaction shows investors really were expecting something massive. With a fantastic recovery already in the price, it will be difficult to go much further. And the comments of CEOs and CFOs on earnings calls so far suggest that the risk of inflation (a word I wanted to avoid mentioning) is rising. Stockbrokers now crunch transcripts to look for trends — and the overwhelming one so far is increasing concern about inflation. These numbers come from the quantitative team at BofA Securities Inc.: 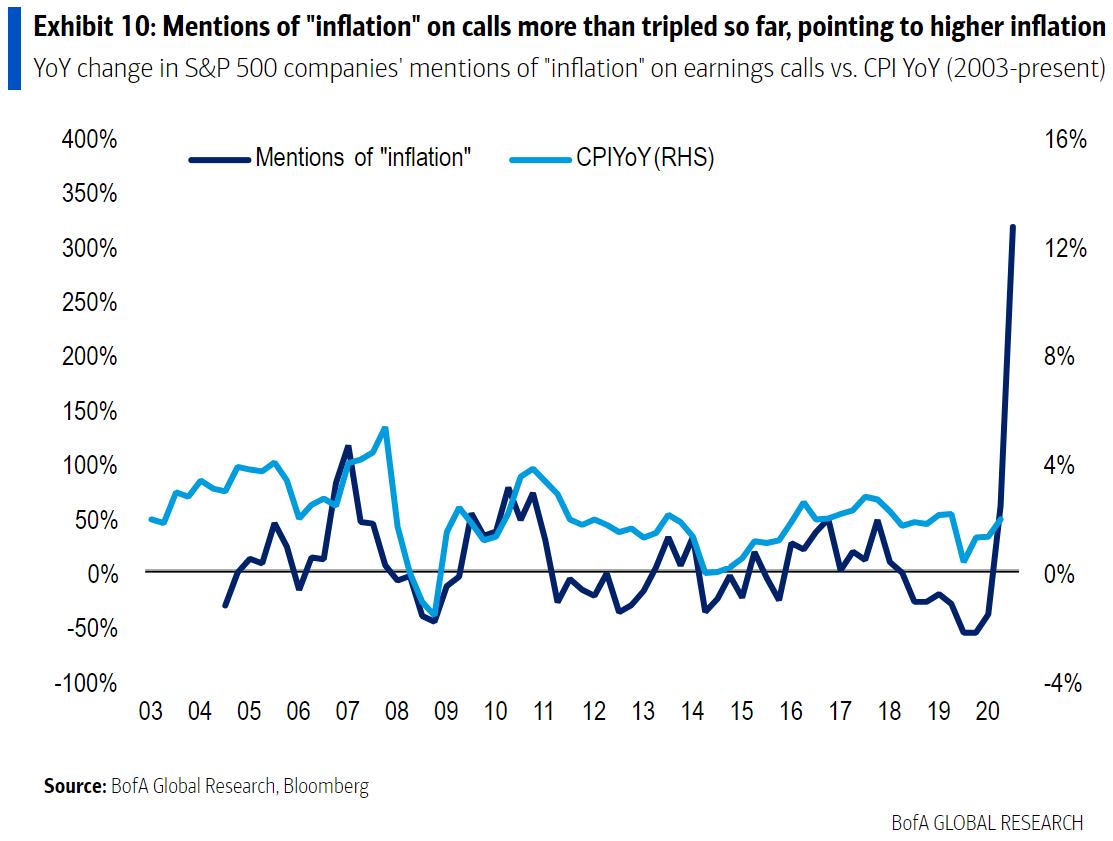 Such a sharp increase cannot be ignored. The great inflation scare of 2021 may yet turn out to be a great head fake, but for the time being it’s a mighty real phenomenon that could yet have an impact on central bankers, and on the bond market.

Anyone concerned about overheating will get plenty of support from the numbers coming out of corporate America. As BofA shows, expectations have shot up in the last few weeks. This is largely a reflection of the way the suddenness and extremity of last year’s shock has scrambled perceptions, but still it’s very uncommon to see estimates move like this. The corporate “game” of talking down expectations ahead of results is inoperative for the time being: 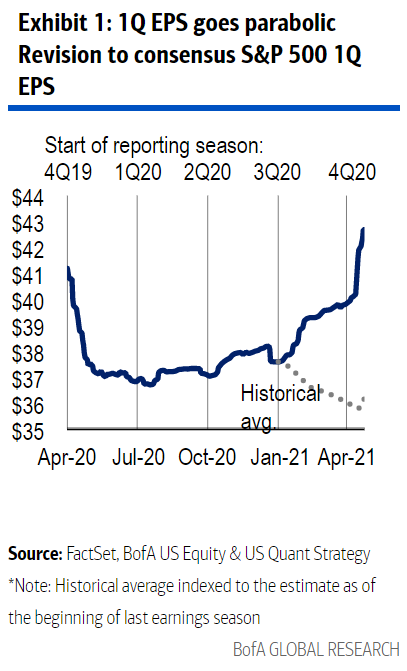 If companies keep beating forecasts at the same rate over the next couple of weeks, we could end up with growth for the quarter of as much as 40% from a year earlier. This would owe much to the low base set in the first three months of last year, but it’s still extraordinary:

If the growth rate ends at Factset’s current projection of 33.8%, that would be the best of any quarter since the third period of 2010, when the post-Great Recession recovery was beginning to crank into gear. The numbers also show how much this quarter is being driven by cyclical companies that were prime victims of the pandemic, led by financials and consumer discretionary businesses. And if current forecasts are right, industrials still have a lot of growth ahead if they are to partake of this recovery: 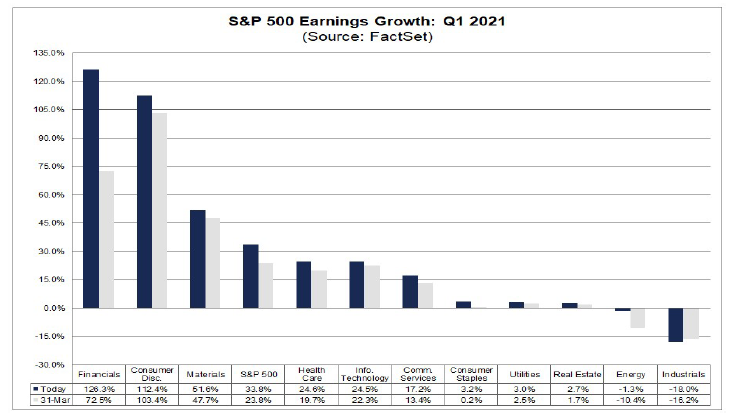 By the end of the year, Wall Street seems confident that industrials will indeed have enjoyed a renaissance, with growth for the year of more than 80% — although that number has been trimmed back slightly in the early days of this reporting season: 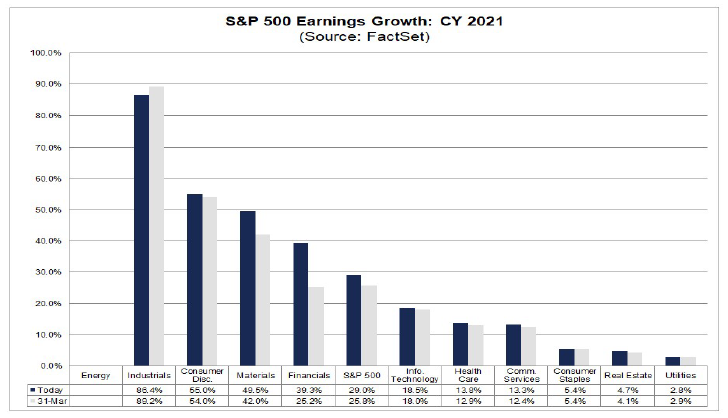 To put these numbers into perspective, analysts now expect S&P 500 earnings for the year to come in at 80% above the level that was expected at the outset of the crisis year of 2008. In Europe, where expectations have risen at the same rate so far this year, profits are still on course to be 20% lower than had been expected for 2008 (the numbers here use the MSCI indexes). The global financial crisis, although perceived to have its roots in the U.S., has done far greater damage to corporate Europe than to corporate America: 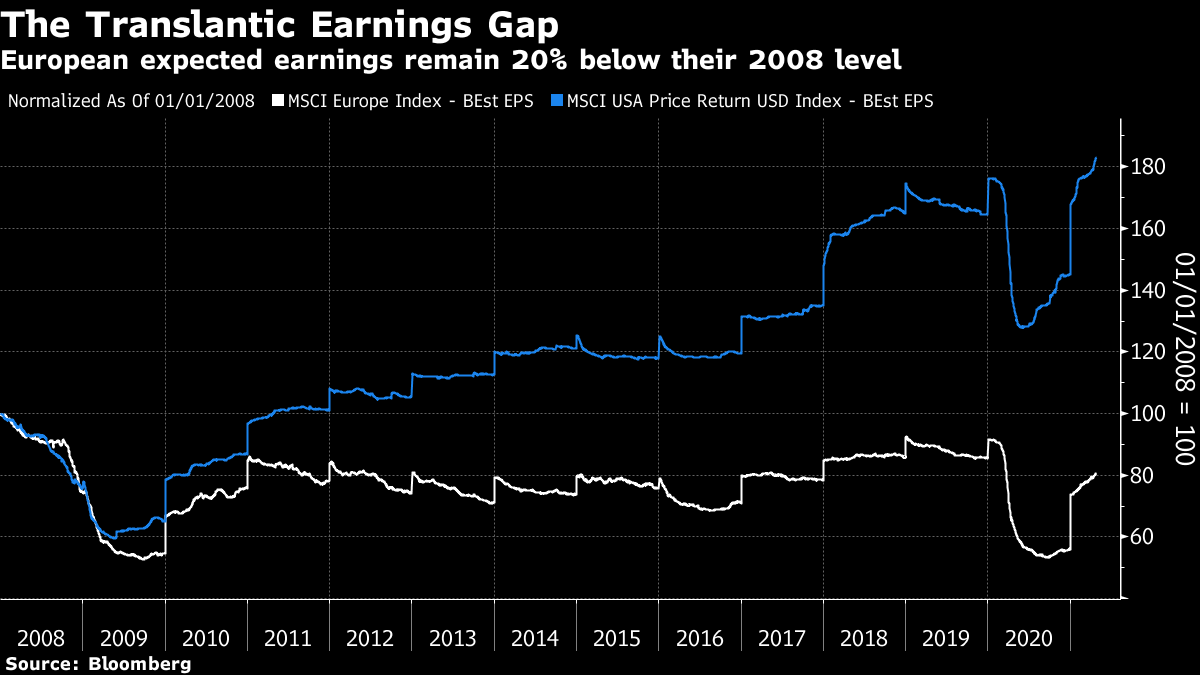 On both sides of the Atlantic, the single biggest question for companies could concern margins. A central issue for European companies since the crisis has been their lack of profitability. Even when the continent’s stricken banking system is excluded, they have found it very difficult to build margins, as this chart from Morgan Stanley shows. The expectation is for a significant improvement this year, and much depends on whether this happens: 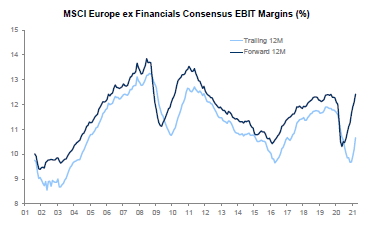 In the U.S., where companies have found it much easier to jack up profitability, margins have already completed their recovery from Covid, and the current expectation is that they will fall slightly for the first quarter, from the final three months of last year. That would reflect increasing pricing pressures, and an inability to pass on costs — in other words, rising costs might manifest themselves in lower profits for companies, rather than higher prices for consumers. The effect is only expected to be small, but the issue of margins and pricing power will be at the top of the agenda: 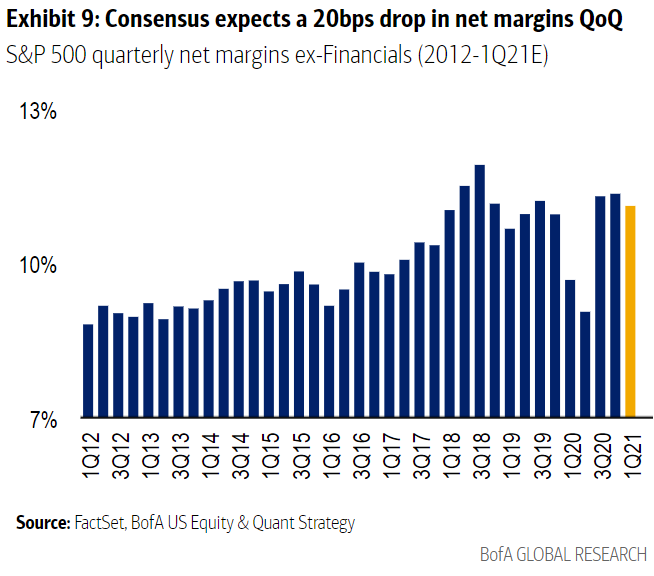 Margins in the U.S. might yet, in other words, reveal whether there really is overheating in the economy, and whether it will manifest itself in inflation, or in pain for the corporate sector. And that is arguably the single most important issue in global finance these days.

Perhaps it’s time to return to the tale of valuations. Short-term yardsticks based on profits are obviously thrown out by such huge earnings volatility, but there are still ways to get a handle on valuations. None of them offers much comfort.

Tobin’s Q, the ratio of total stock market capitalization to the total replacement value of the assets in its companies, is at an all-time high, as shown by this chart from Morgan Stanley. Over time it tends to be mean-reverting. It is a long way from the mean now: 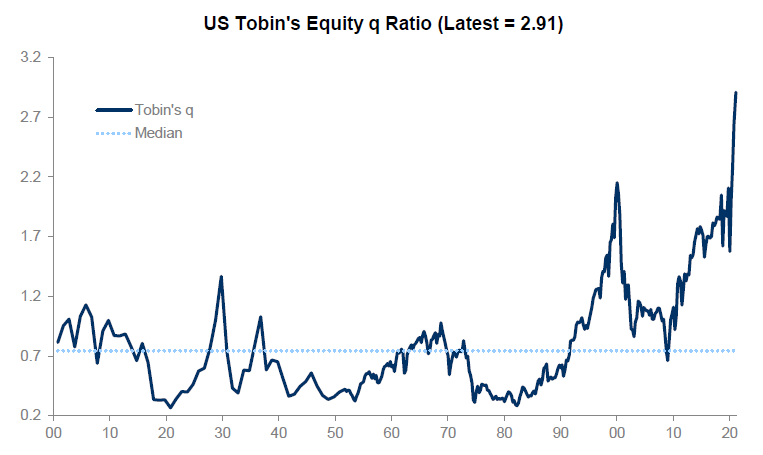 The immediate riposte is of course that the bond market is also historically expensive. Taking into account how low bond yields are, stocks don’t look so expensive. This has been a respectable argument for almost all of the post-crisis decade, and explains why the stock market has done so well. Bonds looked very expensive compared to stocks at the worst of last year’s Covid shutdown, and sent a great signal to buy equities. But after the past year’s titanic stocks rally, and a sharp rise in bond yields over the last few months, the argument that they make equities look cheap appears out of date.

The charts below are from Mike Wilson, chief U.S. equity strategist at Morgan Stanley. Using a conventional equity risk premium, which involves subtracting the 10-year Treasury yield from the earnings yield (the inverse of the price-earnings multiple) for the S&P 500,  we find that stocks are bang in line with their most expensive level since 2002. It’s made sense to buy stocks for most of that period, of course, but valuation isn’t terribly exciting.

When Wilson substituted the 10-year inflation breakeven for the bond yield, on the reasonable basis that the hurdle we really want our investments to clear is inflation, he arrived at an equity risk premium almost exactly as low as at the apex of the dot-com bubble in 1999 and 2000. Using breakevens, and assuming that the current belief in a modest revival in inflation is correct, then stocks are as expensive as they’ve ever been. Yes, they were a great bargain last March. They’re not anymore. 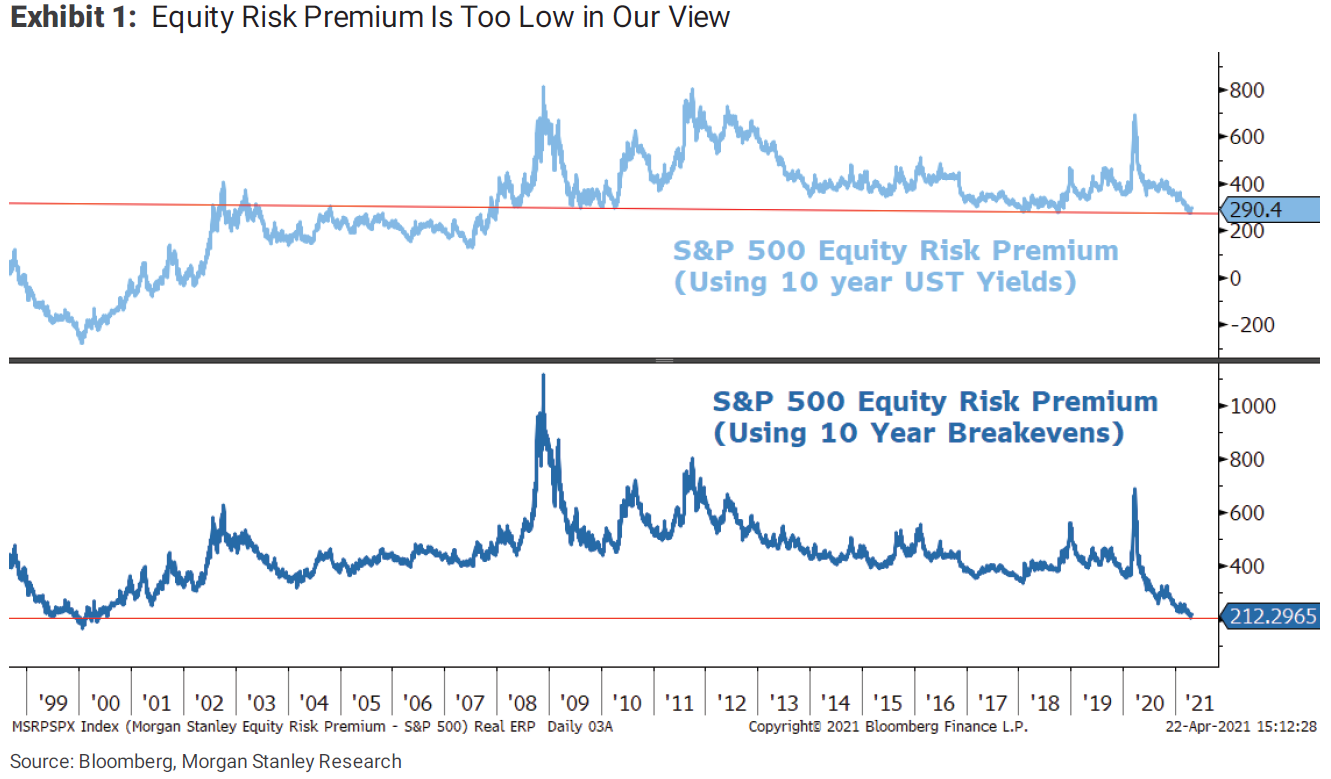 Does the great rally in earnings help the case for stocks? Not really. In the past week, expected profits for 2021 finally exceeded the earnings that were estimated for 2020 at the start of last year, according to Bloomberg’s survey of expectations. Meanwhile the S&P is up about 30%. The stock market must be discounting a few more years of great improvements in earnings per share. With a corporate tax hike in the offing, that looks most hopeful. 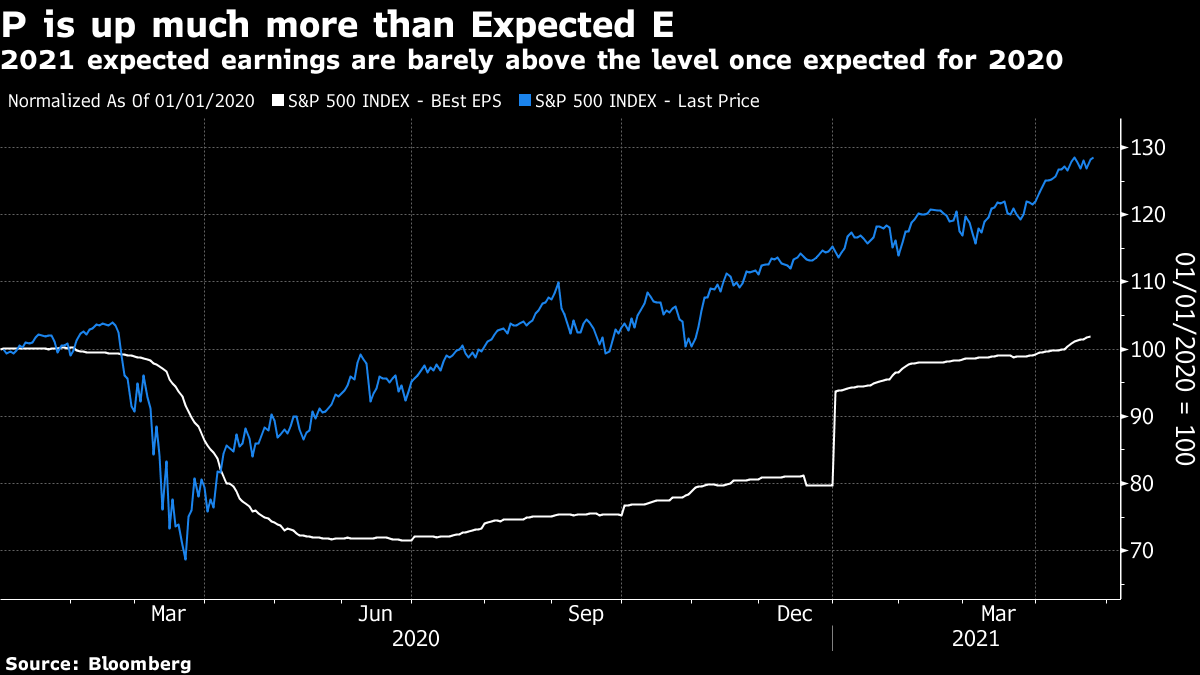 If we want to look at the prospective P/E in its own right, it provides little comfort. It jolted down in January with the move from 2020 to 2021 earnings, and we should ignore the spike at the end of last year . The current level needs to be taken more seriously, and suggests that the market is at a level only succeeded in the bubble years of 1999 and 2000: 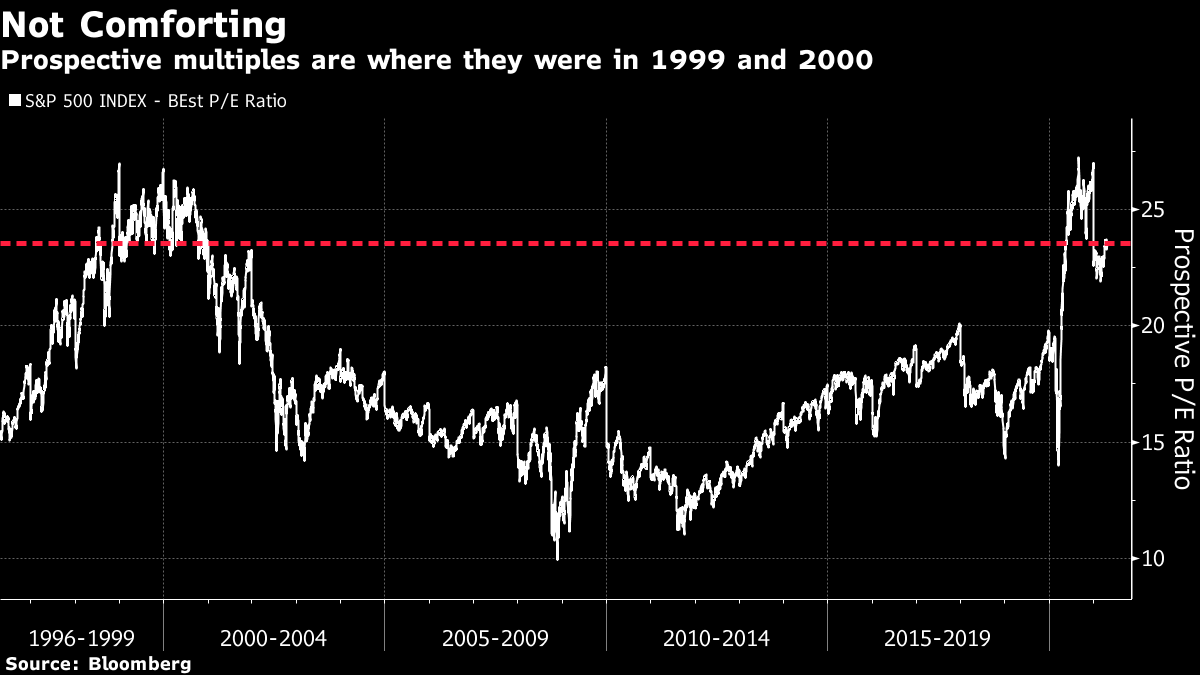 Valuation provides no help with timing, and it is always possible for an expensive market to become even more expensive. The final madness of the boom at the turn of the century only really got going once the market had reached about the valuation it’s at now. But the sense that the bond market and valuation have made it easy to buy stocks seems to be worryingly persistent, even though it is no longer true. In broad terms, the equity risk premium has never been lower. To quote Wilson of Morgan Stanley, “while there’s no rule saying it can’t go lower, we think there’s low probability that it will.”

One great podcast I forgot to mention last week: The Shrink Next Door, featuring a lengthy investigation by Bloomberg Opinion colleague Joe Nocera into the bizarre manipulative behavior by the psychiatrist who lived (or appeared to live) next to him in the Hamptons on Long Island. He effectively took over the lives of his patients, lived in their houses, and took over the running of their businesses. It’s extraordinary if macabre listening.

The original podcast came out nearly two years ago, but Joe recorded a new episode last week after he succeeded in having the shrink of the title barred from continuing to practice. Also, the podcast is now to be turned into a sitcom also called The Shrink Next Door starring Will Ferrell and Paul Rudd. I suspect it will be rather a dark comedy.

Anyway, it’s a remarkable tale brilliantly told. And for a survival tip, if you ever feel the need to seek therapy from a psychiatrist, make sure you agree on the bounds at the outset.

Like Bloomberg’s Points of Return? Subscribe for unlimited access to trusted, data-based journalism in 120 countries around the world and gain expert analysis from exclusive daily newsletters, The Bloomberg Open and The Bloomberg Close.

Bloomberg: China is losing the soft war but could win the hard one

Bloomberg: China is losing the soft war but could win the hard one