Singapore's leadership plan has been upended. The Fed's Powell says economic recovery is incomplete. Ongoing vaccine drama risks prolonging the pandemic. Here's what people in markets are talking about today.

Singapore's Finance Minister Heng Swee Keat — the man designated to succeed Prime Minister Lee Hsien Loong — has stepped aside, calling for a younger leader. Heng bowed out in a surprise move that will likely push back a long-telegraphed power transition in the city-state and leaves the race to become the country’s next leader wide open. On Thursday the prime minister signaled that the process could take several years, and the party aimed to have a successor in place by the 2025 election. The city-state has only had three prime ministers since independence, with one party ruling since 1965. Here's a shortlist of front-runners to succeed Lee.

Asia stocks look set for a steady open Friday following a Wall Street rally after comments from Federal Reserve Chair Jerome Powell. Futures pointed higher in Japan and lower in Hong Kong. The S&P 500 notched a record, though volumes on U.S. exchanges hit another low for the year. The Nasdaq 100 outperformed, aided by Apple and Tesla. Energy producers and banks retreated.  Treasuries gained, driving the 10-year yield to a two-week low, and the dollar fell.

Where Does the Gaming Industry Go From Here?

Last year, limited entertainment options outside the home led to a surge in video game and esports interest. Yet we still believe this is just the beginning of the gaming industry’s growth journey.
Explore what we see ahead in 2021.

The Fed's Powell pledged to get the U.S. back to a “great economy” and invoked a homeless encampment in downtown Washington to make the point that the recovery remains incomplete. Playing down the risk that inflation could get out of control as the pandemic recedes, Powell told a panel Thursday that his commute home takes him past a “substantial tent city,” and that he thought of the millions of Americans who are still trying to get back to work. “So we just need to keep reminding ourselves that even though some parts of the economy are just doing great, there’s a very large group of people who are not,” he said during the IMF panel. “I really want to finish the job and get back to a great economy.”

AstraZeneca's ongoing vaccine drama risks prolonging the pandemic. The WHO and British and European regulators said that they’d found a possible link between the vaccine and a rare type of blood clots but that the benefits of getting the shot outweigh the risks. Australia is guiding against giving AstraZeneca shots to people under the age of 50 amid warnings of clots. China’s ambitious effort to vaccinate 560 million people — 40% of its population — by the end of June is running into a supply shortage. India is attempting to boost its capacity to make vaccines, as new Covid cases surge. Around the world, more than 726 million doses  have been administered across 154 countries.

Credit Suisse is tightening the financing terms it gives hedge funds and family offices, in a potential harbinger of new industry practices after the Archegos blowup cost the Swiss bank $4.7 billion. The bank has been calling clients to change margin requirements in swap agreements so they match the more restrictive terms of its prime-brokerage agreements, people with direct knowledge of the matter said. Swaps are the derivatives Bill Hwang's Archegos used to take highly leveraged positions in stocks. Here's the inside story of how Hwang lost $20 billion in just a few days.

The smoke may have cleared from last month's attack on Treasuries but the battle looks set to resume as bond vigilantes prepare their next assault. As my colleague Katherine Greifeld notes, short interest in the $14 billion iShares 20+ Year Treasury Bond ETF climbed to about one-fifth of shares outstanding this week, according to data from IHS Markit. That's the highest since early 2017 and a sign of demand for bearish wagers against longer-dated bonds, a trend mirrored in the futures market. 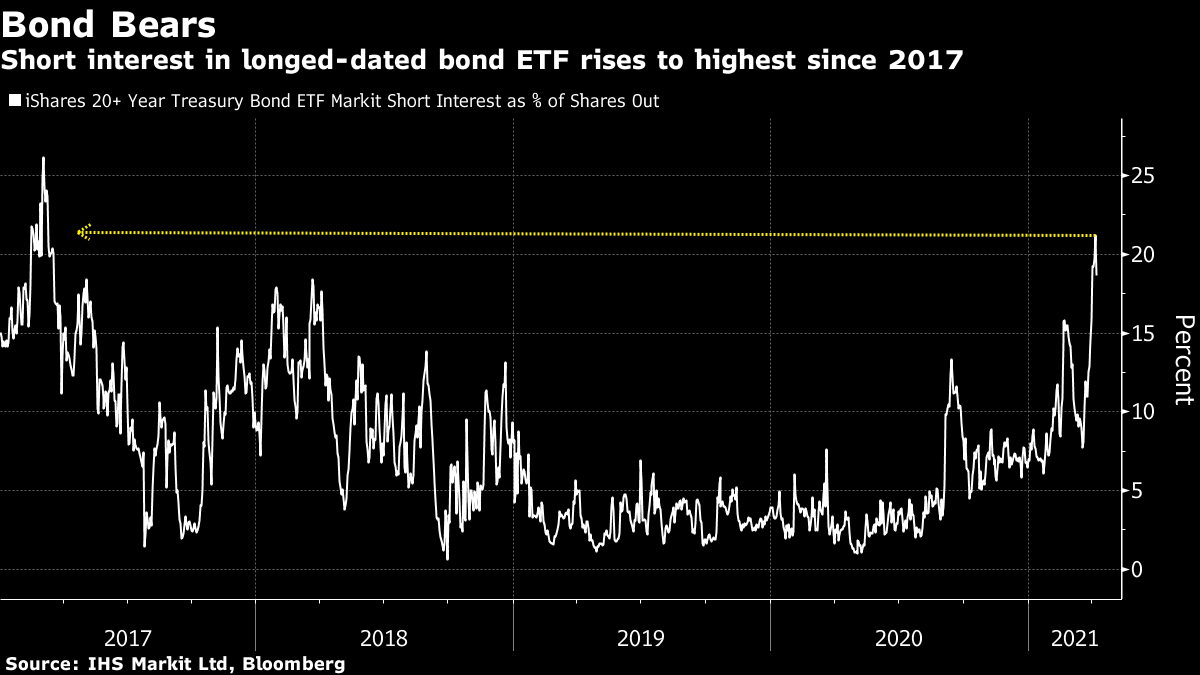 Thirty-year Treasury yields have stalled just below the 2.5% mark, with their benchmark equivalents hovering below 1.75%. Their rise this year can be put down to expectations of growth and inflation. That makes hard data key to what comes next, with volatility likely to pick up as economic releases confirm — or question — the supercharged growth narrative.

Bloomberg: SPACs and crypto are mystery boxes, not always in a good way