Bloomberg: The best place to be

The U.S. pledges to send 60 million Covid shots abroad as India's crisis intensifies. Singapore is now the best place to wait out the pandemic. Tesla made $101 million on Bitcoin in the first quarter. Here's what you need to know to start your day.

The U.S. will send 60 million doses of AstraZeneca’s Covid-19 vaccine abroad, and President Joe Biden has pledged his full support to Indian Prime Minister Narendra Modi. India's virus surge and vaccine shortage is threatening to prolong the world's health crisis, but the Biden administration has until now hesitated to give shots to other countries, focusing on vaccinating Americans first. Anthony Fauci says the rollout means a turning point in the pandemic should hit the U.S. “within a few weeks,” CNBC reported. Meanwhile a quarter of EU adults have had their first shot.

Singapore is now the best place in the world to be during the pandemic. A combination of containing the virus and rolling out vaccines at one of the fastest rates in Asia saw the city-state top Bloomberg’s Covid Resilience Ranking this month, dethroning New Zealand for the first time. With a fifth of the population vaccinated, citizens are largely going about their everyday lives, even attending concerts and going on cruises. But vaccination alone isn’t enough to end the pandemic. Here's how the other 52 ranked economies are faring.

How Disruption Continues to Re-Shape the Wellness Economy

During the pandemic, consumers sought out alternative workout routines and traded in their business suits for athleisure wear. As society embraces a return to many pre-COVID norms, some adaptations are here to stay.
We recently explored the new paradigm for the health and wellness industry, and why we believe investors may want to take notice.

Asian stocks are set for a muted open as the earnings season unfolds and amid expectations the Federal Reserve will remain accommodative at its meeting this week despite robust growth. Treasuries and the dollar were steady. Futures in Japan, Australia and Hong Kong were little changed. The S&P 500 Index notched another record high amid solid corporate earnings, with most of the main 11 industry groups gaining. European stocks advanced. The U.S. 10-year Treasury yield hovered around its 50-day moving average, well below last month’s peaks.

U.K. Prime Minister Boris Johnson is reeling from incendiary new allegations about his conduct during the pandemic, fueling a row over claims of sleaze and cronyism. The Daily Mail newspaper reported that Johnson said he would rather see “bodies pile high in their thousands” than order a third lockdown, a claim the prime minister denies. Meanwhile Johnson’s former top aide Dominic Cummings claims the prime minister sought to halt a leak inquiry that he feared would implicate a close friend of his fiancee, and alleges Johnson planned to have secret donors pay for a renovation to his official Downing Street apartment. Cummings denies leaking private text messages which appear to show the premier agreeing to “fix” a tax issue for billionaire James Dyson. The accusations come at a highly sensitive time for Johnson’s team.

Tesla reported a higher-than-expected seventh consecutive quarter of profit on strong demand for its top-selling Model 3 sedan but left its multi-year outlook for 50% growth in deliveries unchanged. The company delivered more than a half million cars in 2020 and reported deliveries of 184,800 cars in the first quarter, topping the last quarter of 2020. On top of automotive profits and regulatory credits, the company made $101 million selling Bitcoin in the first quarter, having spent $1.2 billion on the digital currency in the period. Shares fell 1.9% to $724.01 in aftermarket trading.

There seems to be an idea that the worst of the pandemic-induced balkanization of the global economy is behind us. After all, vaccination efforts are underway and some parts of the world are actually getting back to normal. But if anything, there's reason to worry that things might be about to get a whole lot worse in terms of regional divisions and all the risks that they bring: Think more supply chain disruptions, unpredictable demand for goods and services, and a drag on global growth. 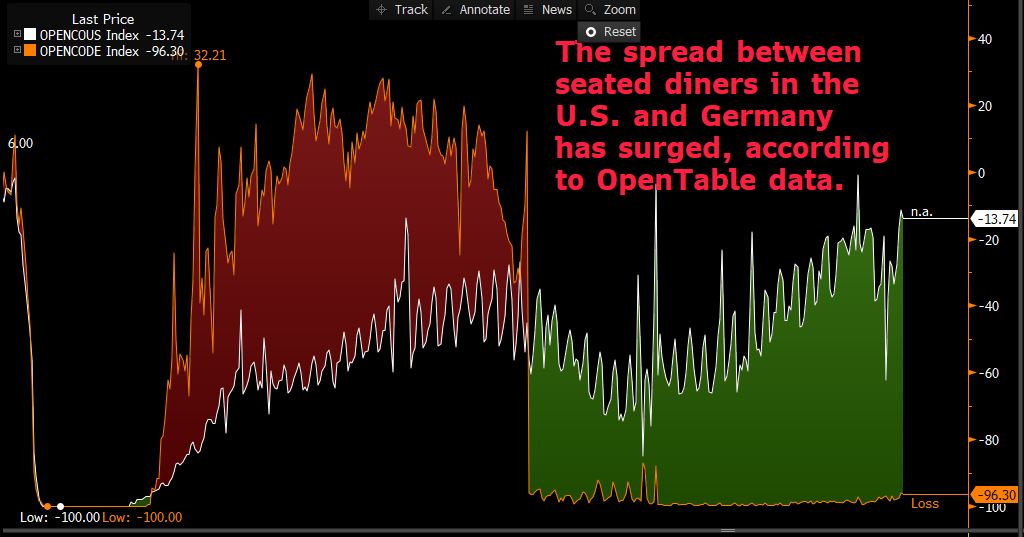 OpenTable data for seated diners YoY in the U.S. vs. Germany

The outbreak of the pandemic certainly happened at different speeds in different countries last year. But most of the world faced restrictions of one sort or another. Now, with vaccination drives spurring a return to normality, there's a real chance that varying speeds of recovery grow more extreme — and potentially go unnoticed and unappreciated until it's too late.

Brazil, for instance, remains a hotbed of virus mutations. Much of Germany is still in lockdown. In Asia, India has reported successive records for daily Covid-19 infections and deaths, with horrifying reports about shortages of oxygen and bodies piled outside crematoriums. But the picture is very different in places like the U.S., where a reasonably successful vaccination drive and looser restrictions on movement mean people are starting to go out more, and even take vacations. Ironically, it can be easy to overlook the interconnectedness of the global economy when you're busy booking your first overseas trip in over a year.