China won't be labelled a currency manipulator by the U.S. Jack Ma's fortune jumps as Ant agrees to a drastic revamp. Bitcoin nears an all-time high. Here's what people in markets are talking about today.

Yellen on the Yuan

China will not be named as a currency manipulator in Janet Yellen's first semiannual foreign-exchange report, according to people familiar with the matter. The report is due on Thursday. The move allows the U.S. — which was accused of politicizing the report in the Trump era — to sidestep a fresh clash with Beijing. The offshore yuan extended its intraday gain slightly, strengthening around 0.2% to around 6.5462 per dollar.

Asian equities looked poised for a steady start Tuesday with U.S. stocks near record highs as investors eye the start of the corporate earnings season and relatively smooth sales of government debt. Futures were little changed in Japan and pointed higher in Hong Kong and Australia. The S&P 500 closed a touch lower after notching three straight weeks of gains. Bond yields rose only slightly as the U.S. Treasury’s auctions of three- and 10-year notes attracted decent demand. Oil and the dollar were little changed.

Jack Ma’s Ant Group will drastically revamp its business, transforming itself into a financial holding company that will be supervised more like a bank. While the revamp leaves Ant’s main businesses intact, Chinese  regulators, who want to rein in the country’s fast-growing internet giants, will make it harder for the firm to exploit synergies between its services. “Growth challenges, in addition to the wider concerns about the tech sector regulators, makes their IPO value and attractiveness a shadow of what it was,” said Mark Tanner, founder of Shanghai-based consultant China Skinny. Don't feel too sorry for Jack Ma though: His fortune jumped  $2.3 billion to $52.1 billion on Monday.

The European Union faces calls to limit AstraZeneca's Covid-19 vaccine to the over-60s. Portugal, which holds the rotating presidency of the EU, has written to the bloc’s health ministers proposing a common approach for the shot's use. Concern is mounting that China’s vaccines are less effective than alternatives, raising questions about nations from Brazil to Hungary that are depending on the shots. The weekly death toll in the U.S. rose for the first time since February. And despite warnings, the world's worst-hit Covid region is reopening.

Bitcoin neared an all-time high on Monday as bullish sentiment gathered steam ahead of a listing by the largest U.S. cryptocurrency exchange. The token rose as much as 2.6% to $61,229, the highest in nearly a month, before falling back to trade little changed. On March 13, Bitcoin reached a record of $61,742. The cryptocurrency is up almost ninefold in the past year, a return that towers above that of more familiar assets like equities or bullion. Meanwhile Binance Coin — which is issued by the largest cryptocurrency exchange — is now the world's No.3 digital token behind Bitcoin and Ether, after rallying 18% in 24 hours.

"Flows before pros" is the idea that in an environment of sluggish economic growth and abundant liquidity, momentum matters more than fundamentals. In that kind of scenario, GameStop can surge to $347 a share and other meme stocks like Tesla can be valued at more than 160 times earnings.

A lot of investment professionals are uncomfortable with this idea (the clue, after all, is in the name). Valuing stocks by gauging the strength of narratives is very different to mounting an argument that a company is overvalued or undervalued according to its earnings. 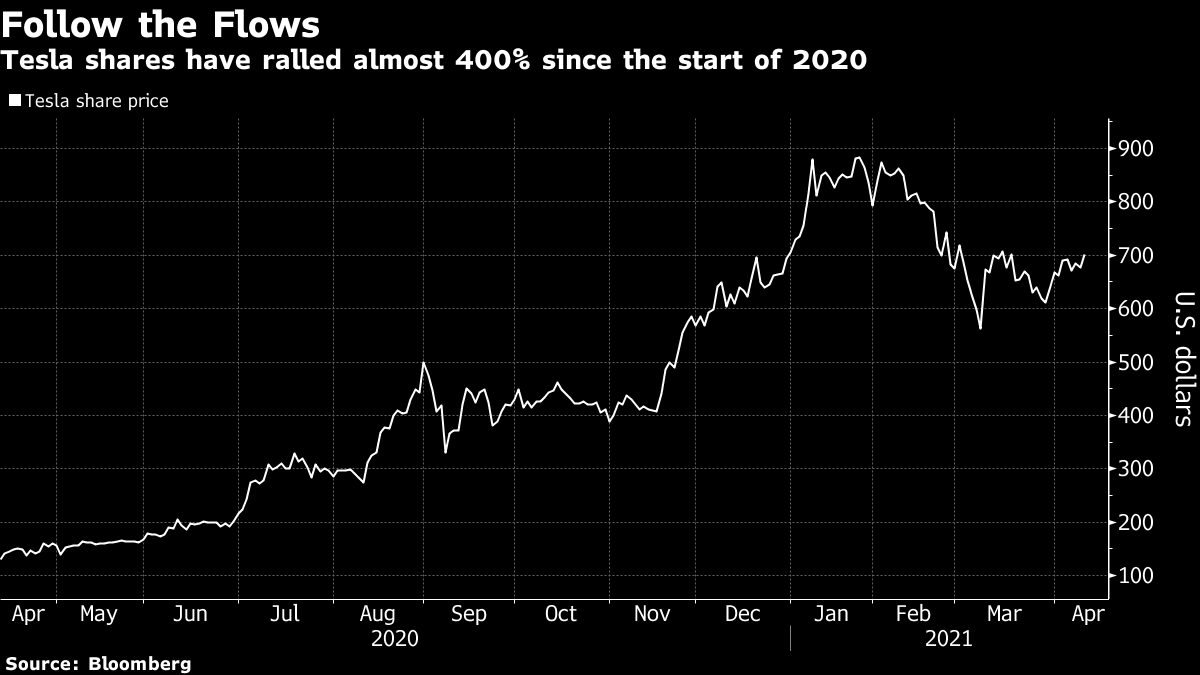 But there's one investment firm that, for better or worse, seems to have nailed the new dynamic: ARK Investment. The point was brought home by Twitter user @ttp_cap in a thread that cites one of our Odd Lots podcast episodes with Brett Winton, who heads research at ARK. In it, Winton outlines the firm's iconoclastic approach to investment research, noting that for analysts: "If you are wrong that's fine, as long as you are uniquely wrong … If you're uniquely wrong everybody thought you were crazy anyway and so it's not priced in … If your forecasts were on average worse but unique, that is better than having forecasts that are actually closer to the actual truth but the same as everybody else."

In other words, capturing the collective imagination with an unusual bull-or-bear-case could be more effective than mounting a middle-of-the-road argument that might be right, but looks a lot like the consensus. As @ttp_cap puts it: "In a world where fundamentals + valuation take a back seat to narrative and momentum, normalizing an absurd moon-shot bull case is extremely important for some stocks, especially if the past performance of those stocks has been largely grounded in narrative and momentum."