There are multiple ways to skin a cat, and at least two ways for the world’s most powerful central bank to paint itself into a corner when it comes to normalizing policy.

The Federal Reserve’s April meeting went according to script: Rates unchanged, asset purchases steady, and while the economy and labor market have “strengthened,” policy makers won’t be pulling back support any time soon. Chairman Jerome Powell had plenty of opportunities to make that clear in the presser, where right off the bat he was asked if it’s time to start talking about tapering. The answer: No.

Naturally, the Fed’s monster bond buying, combined with its new outcome-based approach to inflation, has been the subject of endless debate. That conversation has intensified as U.S. economic data skyrocket (helped in a big way by basic math) and life, at least in the U.S., starts to resemble normal again. Against that backdrop, the Fed’s crisis-level asset purchases may look extreme. As Bloomberg’s own Michael McKee asked in this week’s presser, what do we get for $120 billion a month that we couldn’t get for less? 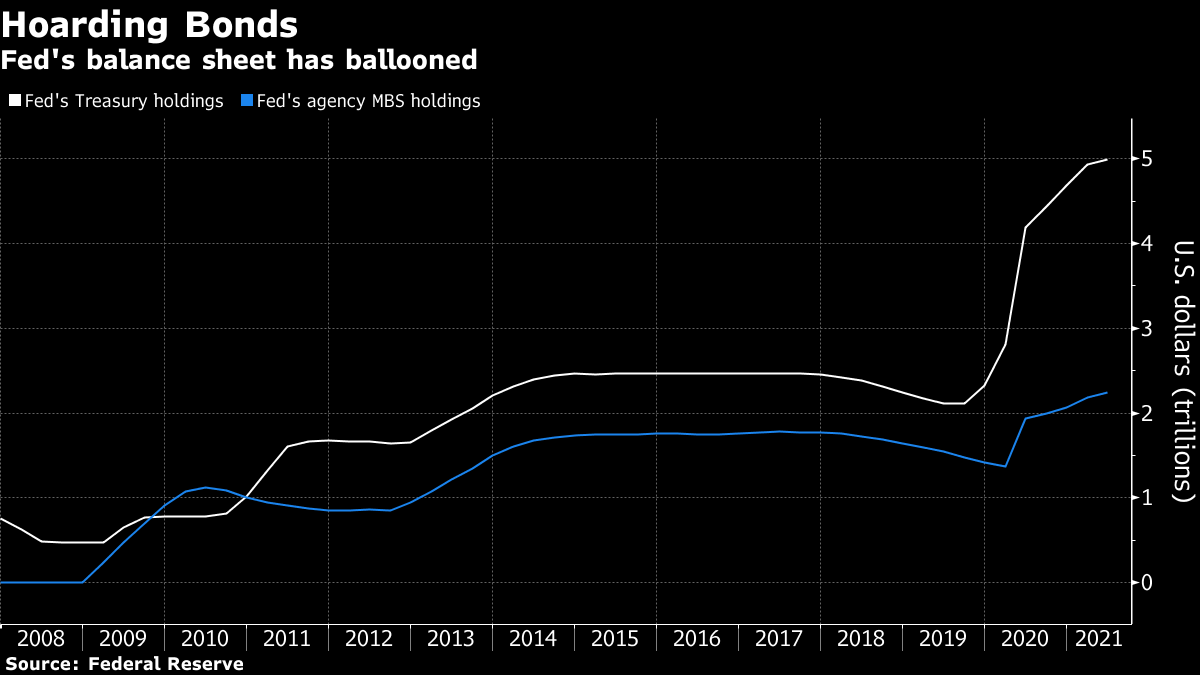 Which brings us to Corner One. Mohamed El-Erian, president of the University of Cambridge’s Queens’ College and a Bloomberg Opinion columnist, has emerged as a passionate critic. He argued in a column this week that the Fed should begin tapering — but won’t — and inaction risks fueling inflation and financial instability. El-Erian reiterated that view in a Clubhouse conversation with myself and Bloomberg Opinion’s Brian Chappatta this week, saying that the longer the Fed waits to begin scaling back, the harder the policy makers may have to “slam the brakes” later.

But there’s also the argument, from Corner Two, that the Fed never gets a chance to hit the brakes. That’s the view of PGIM Fixed Income’s Michael Collins – U.S. growth is peaking now, and inflation won’t run hot enough for long enough for the Fed to hike away from zero.

“Their clock on inflation is going to start ticking next year,” Collins said in a Bloomberg Television interview. “As inflation starts to roll over in years two, three or four, and growth peaks here and maybe starts to revert back to 2% or sub-2% growth in two or three years from now, there’s a really good chance that the Fed waits so long to hike rates that they’re unable to.” 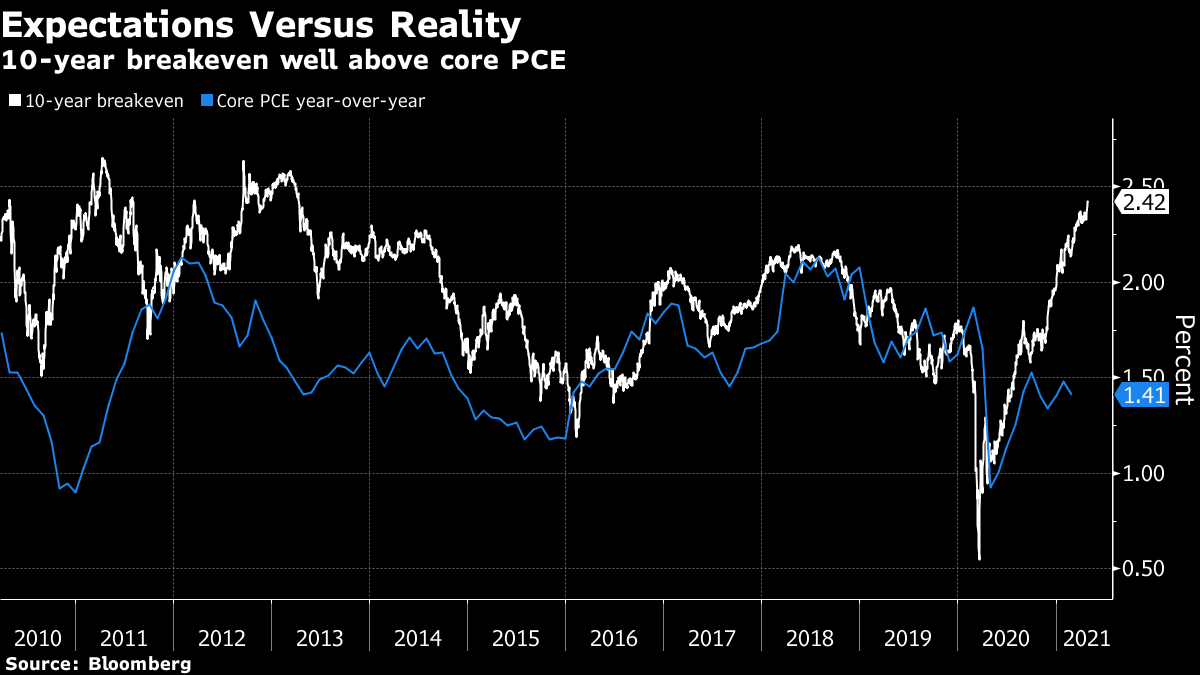 That risk is amplified by the fact that the Fed will start tapering first and “let that play out for a year or so” before touching rates, Collins said.

Of course, the Fed isn’t buying $120 billion worth of assets every month on a whim. Millions of Americans remain out of work, and a still-dire coronavirus situation outside the U.S. threatens global growth. But even Powell himself acknowledged that markets look “a bit frothy,” thanks in part to the Fed’s policies.

But this is a fixed-income newsletter, so we’re not done discussing inflation just yet. Luckily, it’s all anyone wants to talk about. Mentions of the word “inflation” have tripled on corporate earnings calls, according to BofA Securities Inc.’s quant research team. For good reason: We’re just a few weeks into the U.S. reporting period, and already companies such as burrito chain Chipotle Mexican Grill Inc. to diaper maker Procter & Gamble Co. have said they’re hiking prices as rising input costs start to pinch.

Indeed, it feels like prices on everything physical are on the rise. Lumber’s surge continues to amaze, grain prices are going gangbusters, and copper topped $10,000 per metric ton for the first time since 2011 this week. That’s pushed the Bloomberg Commodity Index almost 8% higher in April, on track for its biggest monthly rise since 2016.

Breakeven rates tell a similar story. The 10-year tenor climbed to about 2.46% this week, the highest since 2013. That break out in breakevens has powered Treasury yields higher, with benchmark 10-year rates bumping back up to 1.66% after languishing for several weeks. That’s a different dynamic from earlier this year, when rising real rates were the engine driving nominal yields higher. 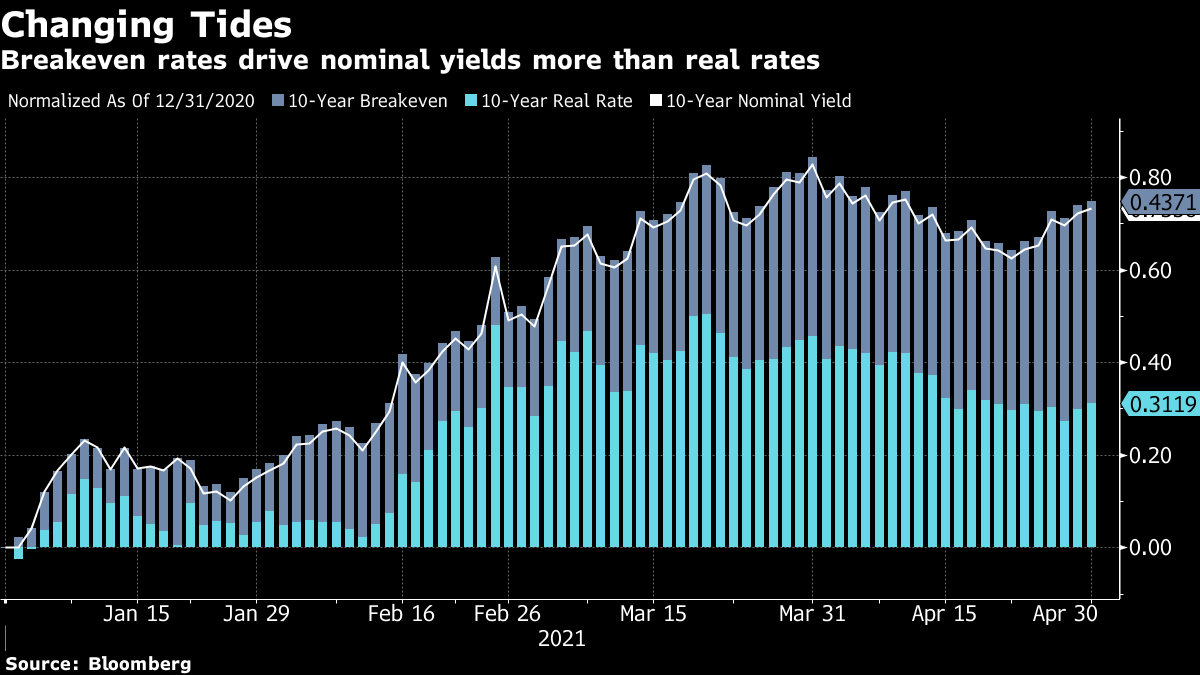 In fact, 10-year real yields — which strip out the effects of inflation and simply reflect growth expectations — are quietly on track for their biggest monthly drop since July. That’s even after March’s blowout jobs report and the series of rosy data points that followed.

But economists up and down Wall Street warn that U.S. growth is hitting its high-water mark after one of the fiercest economic rebounds on record. Goldman Sachs is among the shops that expect growth to peak this quarter and then level off. Judging by the drop in real rates this month, bond traders agree.

“That has to do with a lowering of growth expectations as the recovery has come into greater focus,” BMO Capital Markets strategist Ian Lyngen wrote in an email. “Inflation expectations are at the highs because the Fed has committed to remaining accommodative for now (which continues to stoke inflation) but the headwinds on the path out of the pandemic seen overseas continue to limit global growth expectations.”

That puts the cross-asset landscape in a set-up remarkably similar to the back half of 2020. Recall that after bottoming at just 50 basis points in early August, 10-year Treasury yields began to rise as reflation bets breathed life back into breakevens. However, real yields stayed pinned at record-low levels, implying negative returns on bonds ex-inflation. That stoked awe-inspiring rallies in tech stocks and the market’s more speculative corners.

February’s ramp-up in real rates rattled everything from Bitcoin to SPACs to expensively valued tech shares, but it looks like the sands are shifting. Once again, real yields are stabilizing as breakevens drive Treasury yields higher. Low real rates are good news for risk assets and should put a ceiling on the recent rise in nominal yields, according to TD Securities' Priya Misra. That could be the catalyst big tech needs as the Nasdaq 100 hovers near a record high.

Bring Me Your Finest Junk

It’s time for another round of how low can credit spreads go? This week’s mind-boggling stat comes straight from the riskiest corner of the junk bond market. As chronicled by Molly Smith of Bloomberg News, risk premiums on CCC bonds dropped below 500 basis points this week — a level seen just twice in the last two decades. As you can see in the chart below, neither of those instances lead to happy times.

This newsletter has been marveling for several months now at how hot the junk market has become. Issuance has been on fire, while a relentless rally has turned the ‘high yield’ moniker into a misnomer. But even with valuations as stretched as they are, there’s still value to be found, according to Wells Fargo & Co. 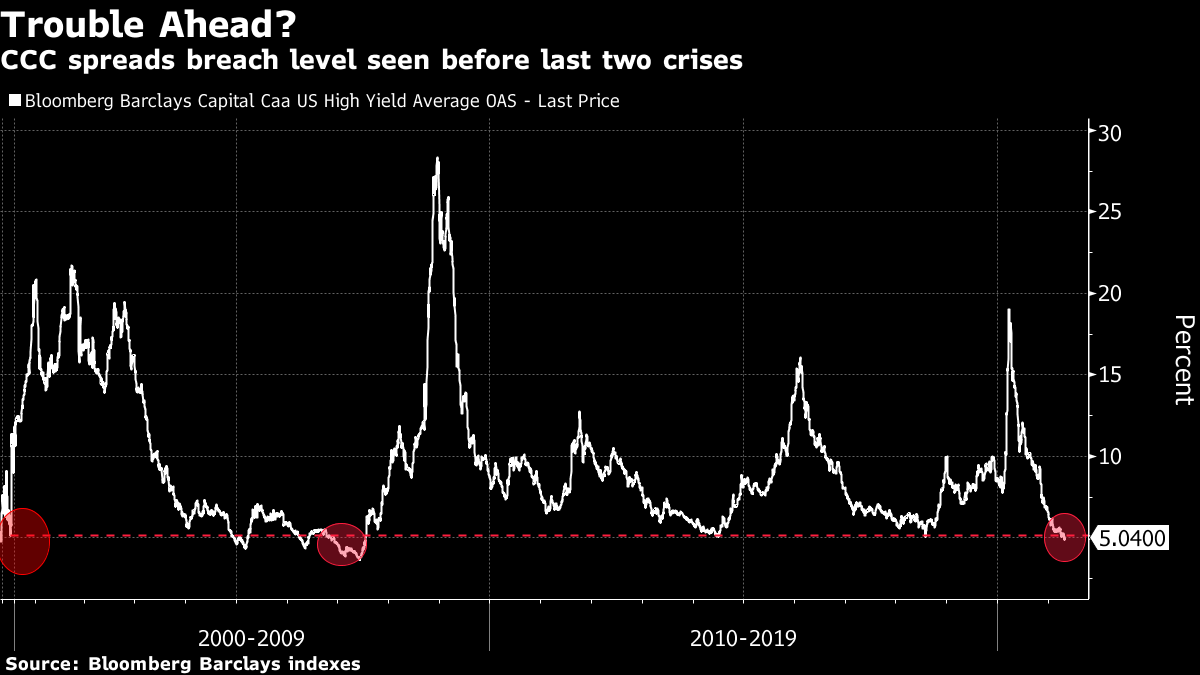 “Credit fundamentals are okay, and the triple-C market is highly aligned to consumer discretionary complex, which by all accounts should benefit pretty significantly in the near term from consumers being able to actually go about and spend the dollars sitting in their pocket,” said Winifred Cisar, head of credit strategy at the firm, in a Bloomberg Television interview. “Triple-C north of 5% feels like a pretty compelling trade, especially if inflationary pressures are going to make real yields feel pretty terrible in those lower-yielding, higher-quality areas of the market.”

Note: everything comes back to real yields.

It’s also worth pointing out that we’re dealing with a much different junk market than in years past, which helps cast this ferocious rally in a more reasonable light. Citigroup analysts crunched the numbers and found that BB-rated bonds currently make up 53% of the Bloomberg Barclays High Yield Index, compared to 37% in mid-2007. On the other end of the scale, CCC debt makes up just 13% of the index, versus 19% in 2007 — meaning that fundamentals are improving as supply is shrinking, at least for the credit market’s riskiest bonds.

“The market has changed meaningfully since May 2007,” Citigroup analysts Michael Anderson and Philip Dobrinov wrote in a note last week. “You don’t need to look at rating breakdowns to know that today’s high yield market is as high quality as it has ever been.”

Jamie Dimon is sending a message to his fellow Wall Street chiefs: It’s time to bring employees back to the office.

Salmon have shrunk so much that Whole Foods redid its guidelines

Protected: OP: Amazon’s Record Earnings, Was It Ever In Doubt?

OP: Amazon's Record Earnings, Was It Ever In Doubt?