Welcome to The Weekly Fix, the newsletter that’s also expected to boom through at least 2023. I’m cross-asset reporter Katie Greifeld.

Hanging Up the Gloves

The reason why “don’t fight the Fed” has been such a popular mantra for decades is that it prevents investors from losing lots of money. Even with that rich history, bond traders staged a mini-coup this year and priced in a far more aggressive path of Fed hikes than policy makers have indicated.

Now it seems those intrepid traders are starting to capitulate. Treasuries have rallied in a big way this week, with five- and seven-year notes absorbing the bulk of that demand, suggesting that bets on Fed hikes are starting to be pared back. 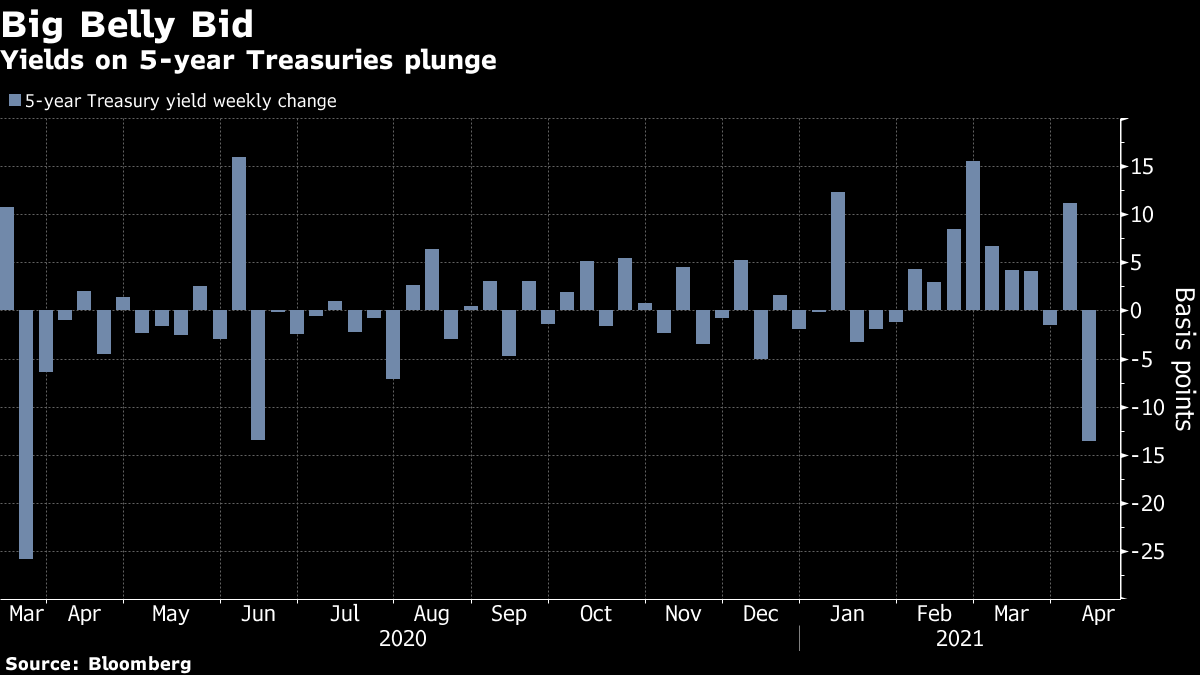 Notably, this rally took off even after the U.S. reported a monster month of jobs in March last Friday. But the Fed’s stable of speakers has been remarkably consistent — and remarkably dovish — in their messaging, with the tone coming from the very top. Fed Chairman Jerome Powell hammered home the party line again this week at an International Monetary Fund panel, saying that policy makers are looking for actual progress on the central bank’s goals and that any burst in inflation will be temporary.

Judging by this week’s price action, that message is starting to sink in among rates traders. And the conclusion is clear: buy bonds.

“The market is pricing in an interest rate path above what the Fed is projecting,” said Gene Tannuzzo, a portfolio manager at Columbia Threadneedle, recounting a conversation with a colleague. “There’s very few times in history when we can make that statement, and most of the time it’s a good time to buy Treasuries.”

BMO analysts echoed that sentiment in a note Thursday, writing that they expect 10-year Treasury yields to revisit 1.5% before March’s peak of 1.77% is “materially challenged.” Powell’s comments at the IMF Thursday drove home the message that “at some point the real economy will need to offer justification for the improving outlook,” they wrote.

Of course, the bond market’s in a tricky spot. Traders are trying to juggle expectations for surging economic growth — JPMorgan Chase & Co. chief executive officer Jamie Dimon expects that “boom” could run into 2023 — with the Fed’s stance that they’re going to look through most of it. That balancing act makes it difficult to hold onto wagers that the Fed will hike rates before the Fed’s current dot plot projections, which have rates on hold through 2023, according to Jefferies Financial Group economist Thomas Simons. 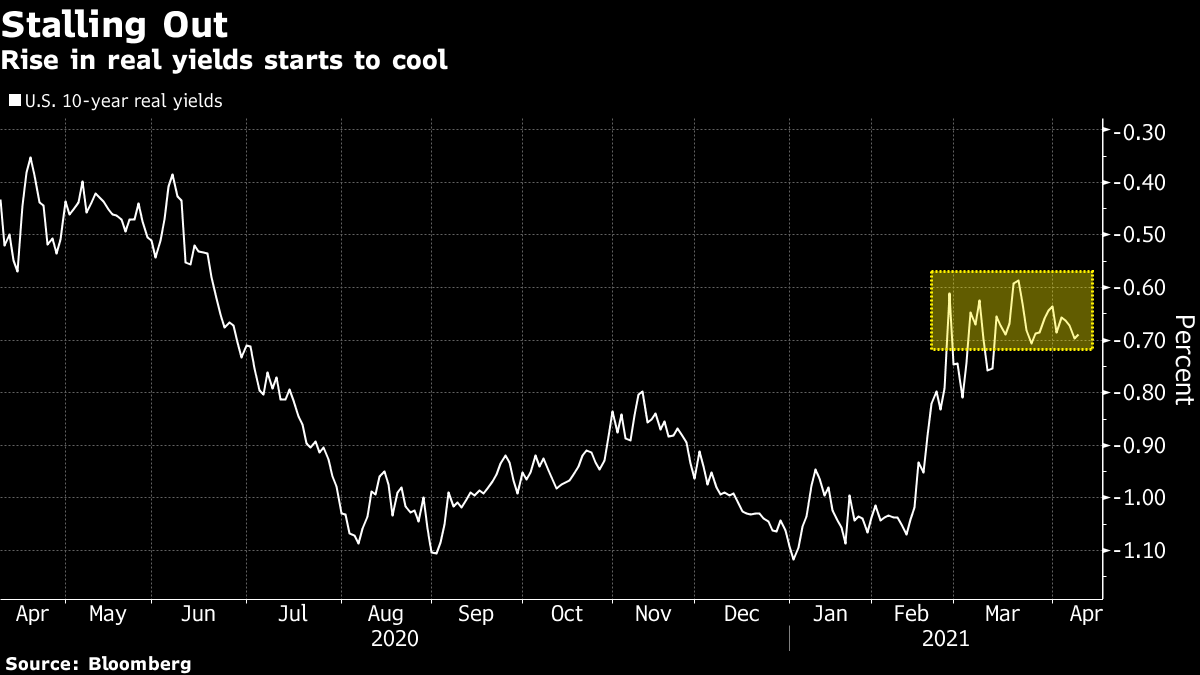 “That’s certainly a very aggressive timeline relative to what the Fed has been saying. Because of that, it’s hard for that position to hold if there’s any kind of pushback,” Simons said. “Once you put those positions on, any kind of pushback would have some legs because you’re not really anchored anything the Fed’s telling you.”

In addition to the drop in nominal yields, breakeven inflation expectations have come off the boil across most tenors. And real rates — which strip out the impacts of inflation — have largely traded sideways since the end of February, with 10-year real yields hovering near minus 70 basis points.

If equity markets have seemed quieter than usual this week (trading volumes are the lowest for the year), perhaps it’s all the handwringing over the Biden Administration’s plan to bump the corporate tax rate back up to 28% (from 21% currently, and compared with 35% prior to the Trump cuts in 2017).

Rates investors have a horse in this race too. The rationale for tax hikes is to help cover the cost of the infrastructure package the president is trying to get through Congress. And since we all still care about debt and deficits, really, the government aims to boost revenue rather than adding to the massive debt load that’s already weighing on the country’s growth prospects, and could well send borrowing costs higher.

Treasury yields have pulled back from the 14-month peaks seen at the end of March. TD Securities’ Priya Misra said this week that we can expect them to rise again if the tax increases envisioned in Biden’s proposal get watered down.

The market hasn’t shown much sign of caring about taxes yet. While analysts have been busily crunching the numbers on the possible damage to corporate earnings growth, the S&P 500 Index has notched up records just about every day this week.

Some of that sangfroid may be skepticism about the likelihood of passing such a bill, given staunch resistance from Republicans and some Democrats. But Elaine Stokes at Loomis Sayles says investors are also clear-eyed about the actual risk.

We’re watching it, but look at the high yield market today, it’s trading at 2.90% over. That’s a market saying there are no defaults coming. So nobody believes in the next couple of years that it’s going to hurt high yield companies, and those are the most vulnerable.

We’re pretty confident something will be passed, and as much as none of us want to pay for it, there are parts of corporate America who’ve really had windfalls and it might be the time to do this.” 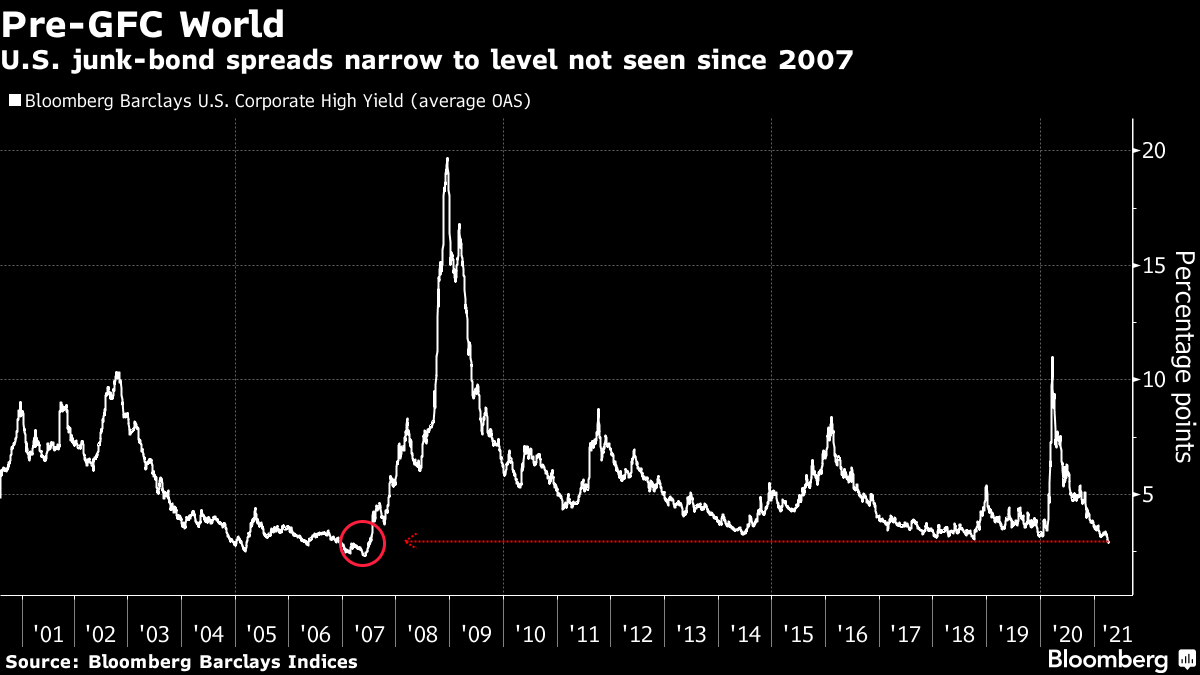 And to that point, junk bonds are thriving, as chronicled by our credit reporter Paula Seligson. To start, the extra yield demanded by investors to own high-yield bonds instead of Treasuries dropped below 3 percentage points for the first time since 2007, Bloomberg Barclays index data show. Meanwhile, average yields for CCC-rated bonds — the last rating before default — dropped to a record low of 6.1% on Tuesday. All of this, in the busiest quarter ever for junk bond sales.

Columbia Threadneedle’s Tannuzzo has been warier than most about the animal spirits in the market. “Unless there’s a specific upgrade catalyst, we’ve really wanted to stay away and let’s be fair, it’s hurt us in the last couple of months.”

In his view, the “sweet spot” in credit markets currently is double-B rated bonds, which have lagged the year-to-date gains in the asset class with returns of just 0.6%. Not only does this corner of the market have more room to rally, it’s a good hunting ground for rising stars, the money manager said.

“That’s where we look at companies that still have some room if they get upgraded to investment-grade, there’d be some price appreciation,” he said.

It’s time to talk about the Treasury General Account again. To quickly recap, the Treasury Department unveiled plans in February to shrink the TGA — which is effectively the government’s checking account — to $500 billion by the end of June. That’s after its cash pile swelled to $1.8 trillion as the Treasury boosted borrowing to fund pandemic relief spending.

That drain is well underway as that pile is tapped to fund the Biden administration’s pandemic relief packages and other previously authorized spending. The TGA last clocked in at just under $1 trillion — missing Treasury’s $800 billion March-end target, but close enough. While strategists from Citigroup Inc. theorized that the cash could end up in risk assets, it’s evidently taking a pit stop in money market funds. 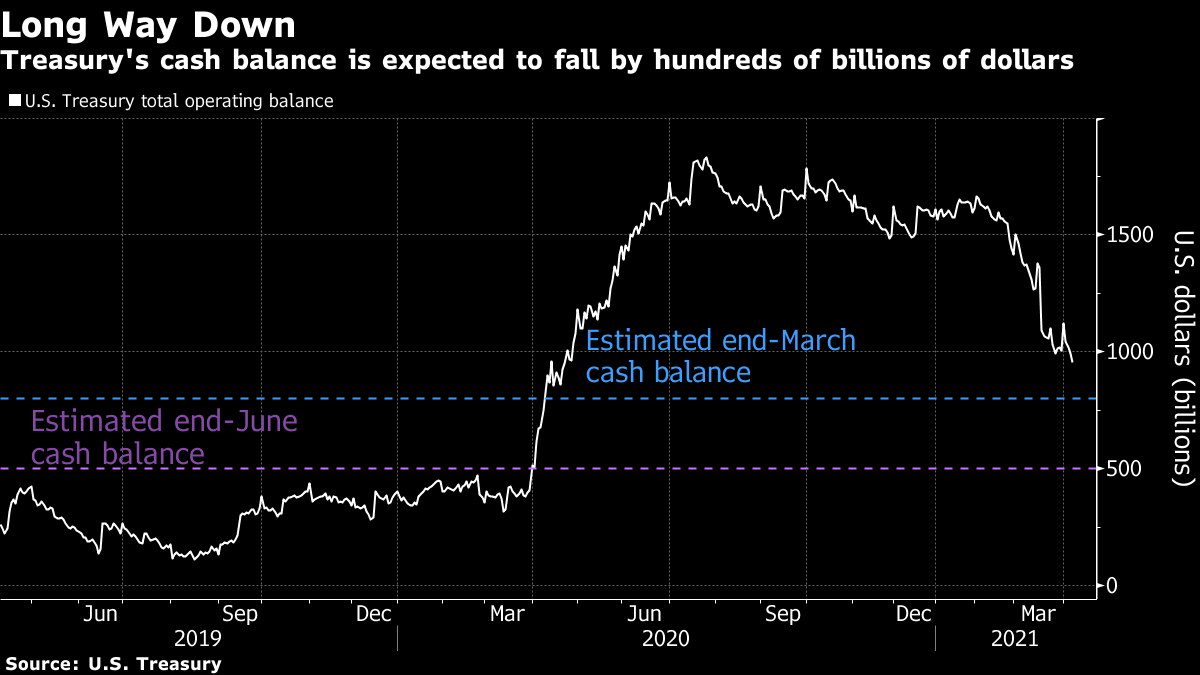 Investors yanked nearly $500 billion from U.S. money market funds between last May, when assets peaked at $4.5 trillion, through the end of 2020. Now they are on the rise again. That’s because as stimulus checks are being mailed, that money needs to find a home. Some of that cash has ended up as commercial bank deposits — to the tune of about $383 billion from late February through March 24 — it looks like the rest is being funneled into money-market funds for safe-keeping.

“You have cash coming into the accounts of private businesses, private citizens,” said Jefferies’s Simons. “As Treasury sends these checks out, someone’s bank account goes higher. It increase reserves. And if it’s not an increase in a deposit at a bank, it could be an increase in money market funds.”

What this means for the short-end and its perilously low rates is tricky. Theoretically, with cash hitting bank accounts at a time when the Treasury is trimming bill issuance, that should squeeze front-end rates — which are already close to zero — even lower. The Federal Reserve is keeping a close eye on the situation, with March’s meeting minutes this week showing that the central bank stands ready to tinker with the interest on excess reserves rate (known as IOER) between meetings. 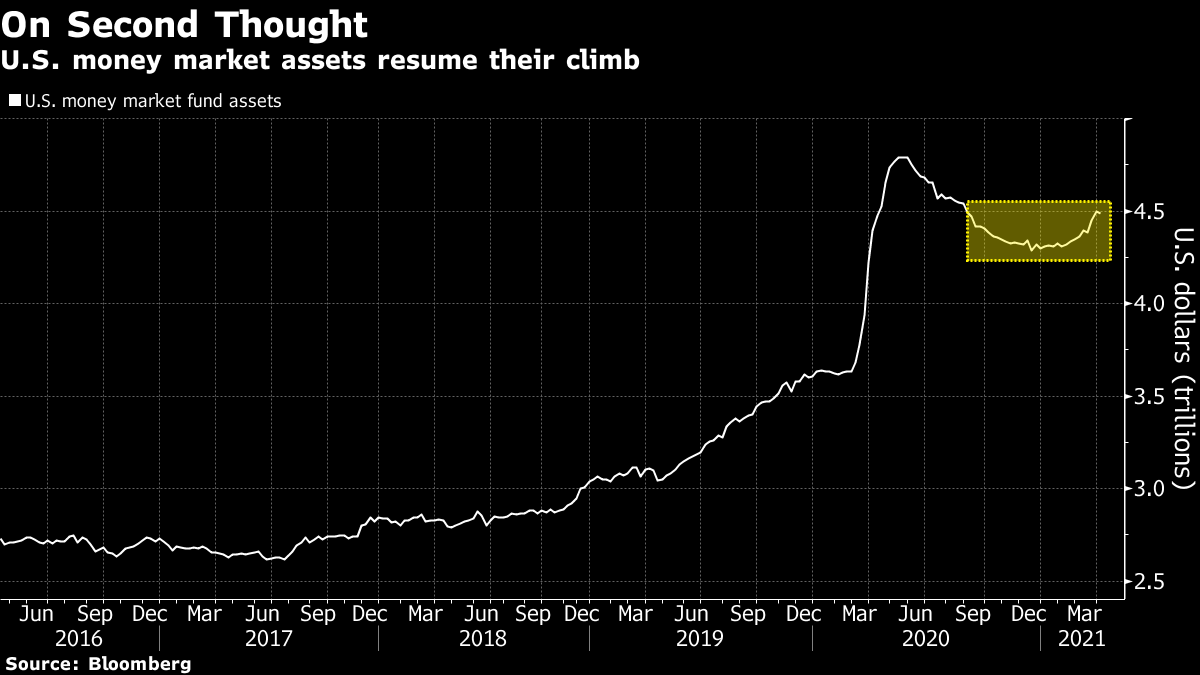 But even if bill yields do dip below zero, they won’t stay there long, according to Bespoke Investment Group’s George Pearkes. He’s heartened by the fact that participation at the Fed’s overnight reverse repo program is on the rise after being largely untapped since May. Bill yields can only fall so far before investors flock to alternatives such as the Fed’s facility, he said.

If “specific issues trade negative or very short term bills trade negative, they can only go so far,” said Pearkes, the firm’s global macro strategist. “There’s a point where it’s not going to make sense for counterparties to be buying those when they can be facing the Fed with repo,” he said.

Listen to this episode of OddLots from last month — Josh Younger on the rates market pricing of climate change.

Try your hand at navigating the Suez Canal