CAIRNS, AUSTRALIA - AUGUST 07: Aerial views of The Great Barrier Reef are seen from above on August 7, 2009 in Cairns, Australia. A recent report by marine scientist Charlie Veron claims that the reef will be so degraded by warming seas that it will be gone within 20 years, and that this situation is now irreversible. He goes on to predict that once carbon dioxide levels hit levels predicted between 2030 and 2060, that all reefs will become extinct and their ecosystems would collapse. The area pictured is also where conservation celebrity Steve Irwin was killed by a singray. (Photo by Phil Walter/Getty Images)

The price tag for driving down global emissions in a major way is, as you can imagine, big. BloombergNEF calculates that meeting the goals of the Paris Agreement with a combination of zero-carbon electricity and hydrogen would require more than $60 trillion of power sector investment, plus more than $30 trillion of investment in hydrogen production and transport investment by 2050. Flex a few technical choices—such as switching over dedicated nuclear power plants to manufacturing hydrogen—and the total price tag is $100 trillion or more.

A hundred-trillion dollars is a lot of money. Spread it out over three decades, though, and it’s merely $2 trillion to $3 trillion a year. It’s also not all the same type of money, so to speak. Those trillions will need to flow to early-stage companies with a hefty appetite for risk but little capital, and from giant asset managers with a low-risk appetite but trillions under management. Pumping up these flows will be a big job for the world’s capital markets. It will also depend on financial plumbing functioning perfectly.

Part of that perfect function is asset rotation, a technical term for companies funding assets at certain stages of their lives, then selling them on to other, better-positioned owners at another stage of life. A project developer uses more expensive capital to fund early work on a wind or solar or battery project; it then sells the asset at a later stage in development, providing the original owner with new investment capital and the new owners with a performing asset. As my colleague Bo Qin says, “asset rotation shows that markets work.” It’s how millions become billions become trillions.

Private equity— capital that, in the energy infrastructure world, is generally geared towards the earlier stages of asset life—has a record amount of dry powder right now, according to Preqin Ltd., a private equity information service. That means more than $2 trillion of funds raised but not yet invested, about eight times more than at the start of the millennium. 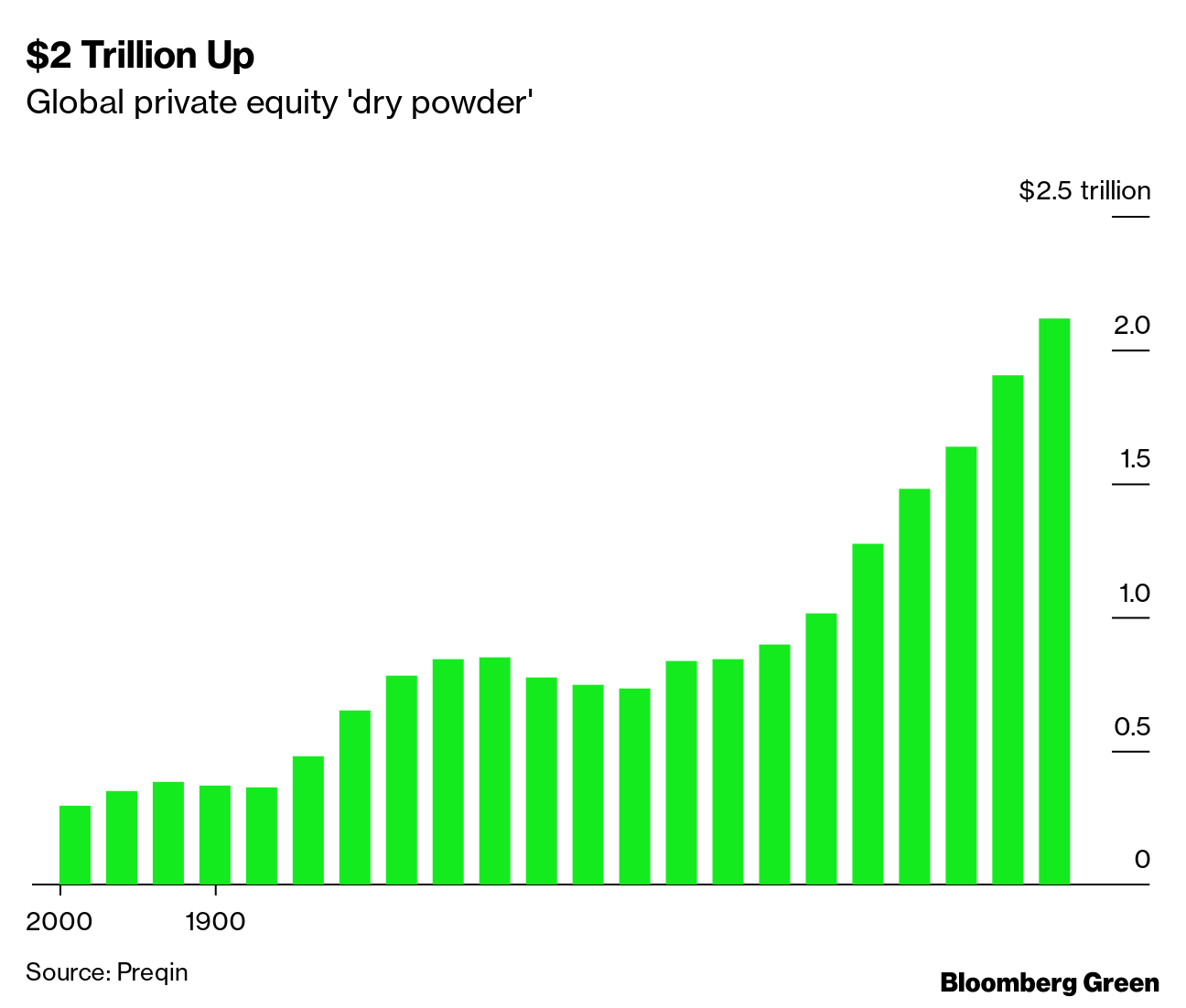 That money pales in comparison to what sits in global retirement accounts: more than $50 trillion at the end of 2019. Almost all of that money is in OECD countries. 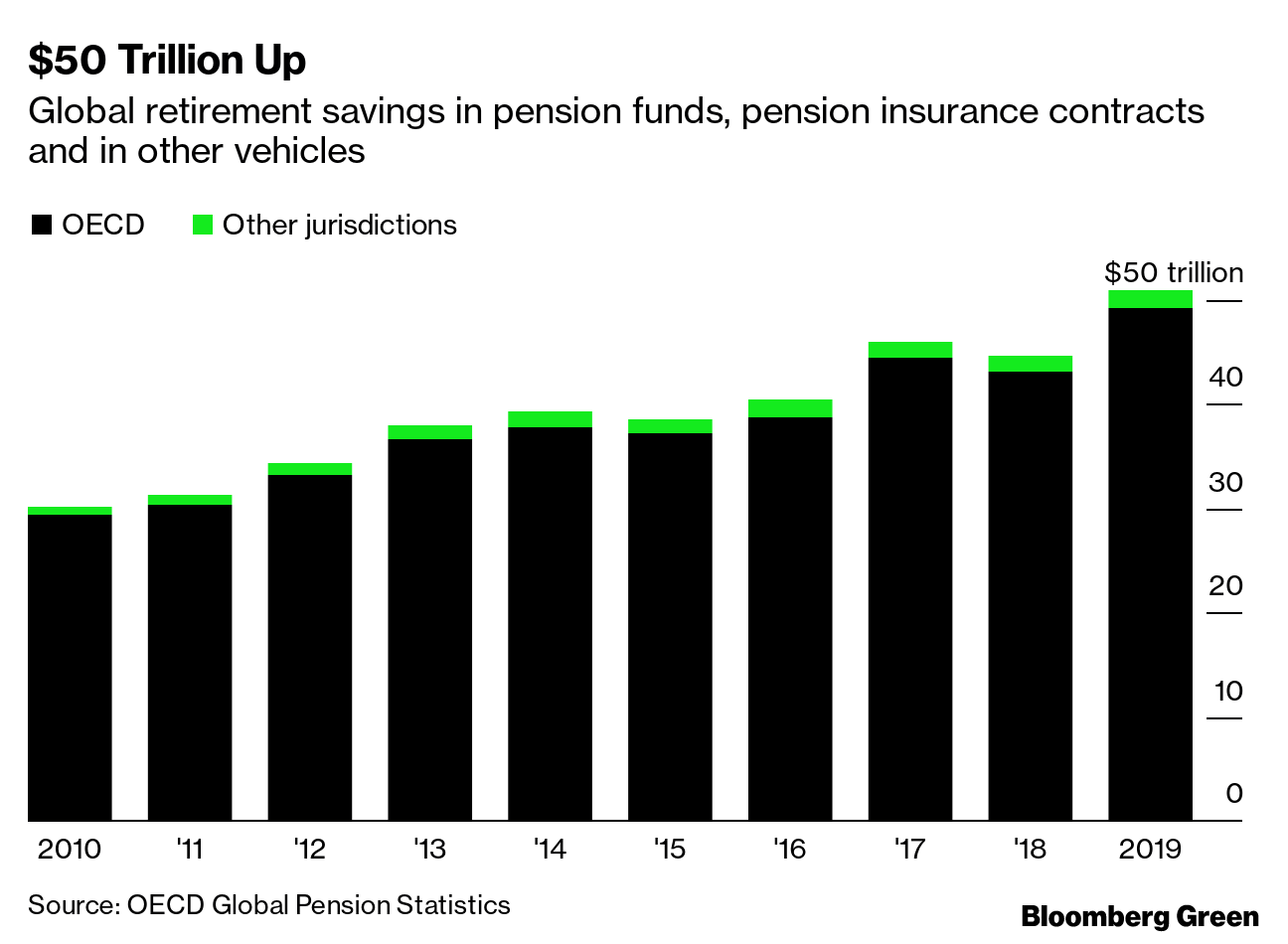 Even that pool of money, however, is only about half the total amount of institutional money under management by just the 500 largest asset managers. At the end of 2019, those 500 firms managed more than $100 trillion combined. 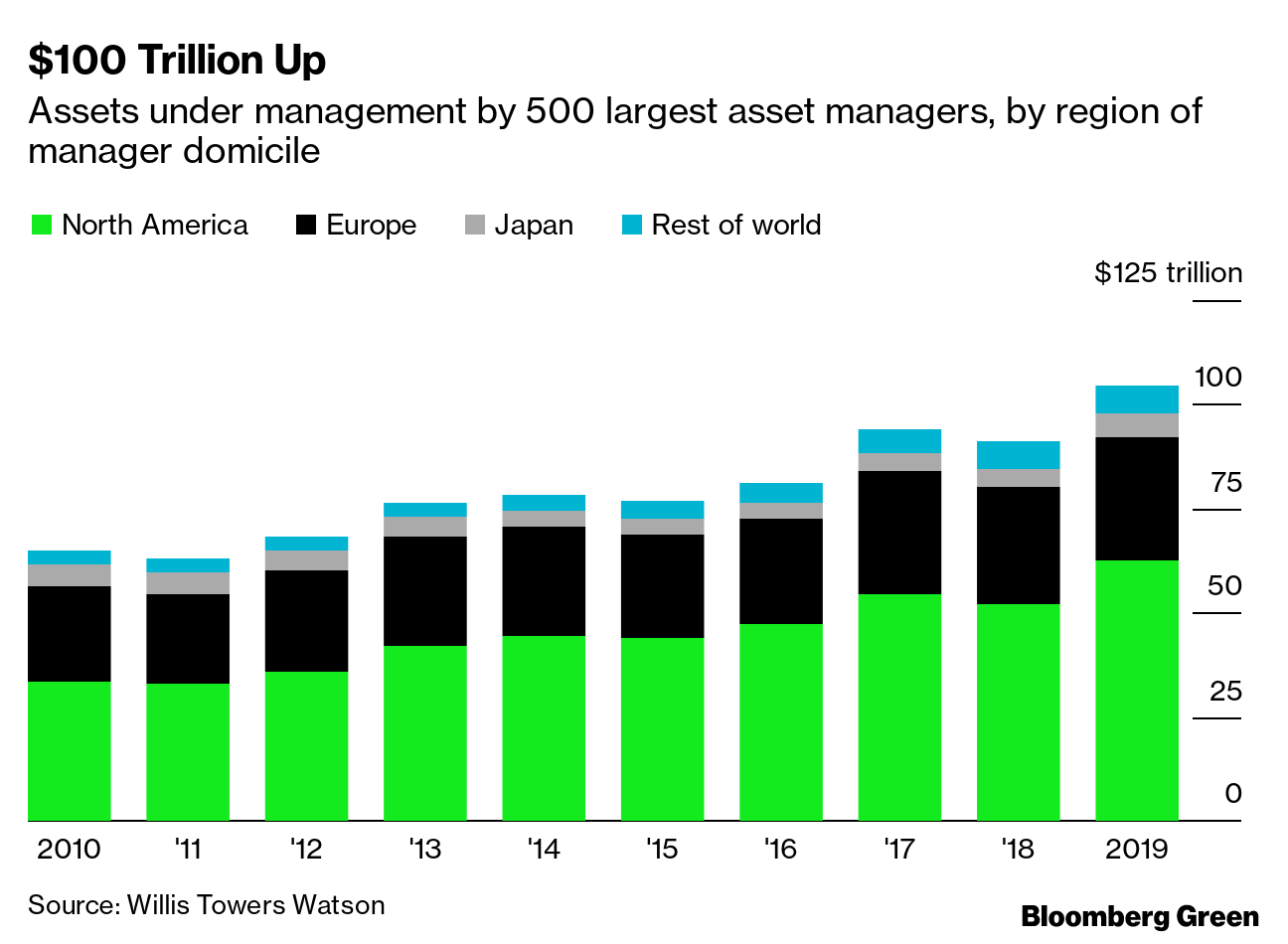 It’s safe to say that the world’s largest pools of money have pools of money available to fund deep decarbonization. But that investment can only take place if money is flowing properly.

What we’re seeing at the moment is that some assets just aren’t rotating like they used to, in particular in Europe. An example is EDP, Portugal’s major electric utility, which rotated about 87% of its assets from 2014 to 2016, but intends to rotate only 35% of mostly-renewable assets from now until 2025.

There are a number of reasons rotation might slow. The first is that renewable assets with stable financial returns look attractive on the corporate balance sheet. The second is that green finance (such as the more than $700 billion of sustainable bonds and debt issued last year) allows companies to re-finance assets advantageously and increase those returns on their own books without cashing out of early-stage assets.

Certainly there are benefits in utilities owning green-financed assets, but at the same time it throws a wrench into the rest of the market. Early-stage funders (i.e. all that private equity money) may find that high-return expectations make it hard to compete against utilities now buying, refinancing, and holding assets. Pension funds and asset managers may not be able to pry zero-carbon assets away from them.

If the market isn’t quite working, it could limit the flow of funds to the energy transition. Early-stage investment has higher returns because it is risky; that’s a feature, not a bug. Long-term investors with tens of trillions in assets will necessarily need to fund a huge portion of the energy transition’s capital demand. But they can only do that if they can get their hands on it.

Like getting the Green Daily newsletter? Subscribe to Bloomberg.com for unlimited access to breaking news on climate and energy, data-driven reporting and graphics, Bloomberg Green magazine and more.​​​​​​​

The New Economy Daily: Discover what's driving the global economy and what it means for policy makers, businesses, investors and you. Sign up here for the latest Bloomberg newsletter.

Help us get better. Take this two-minute survey and tell us how we can improve this newsletter.

Ready to Invest in the Green Economy?

In unveiling its $2T American Jobs Plan, the Biden administration took a major step toward upholding its campaign promises around green energy. Investors looking to align with this theme might consider our Renewable Energy Producers ETF (RNRG), which offers companies involved in wind, solar, biofuels and more – all in a single trade.

Here’s what else you need to know in Green 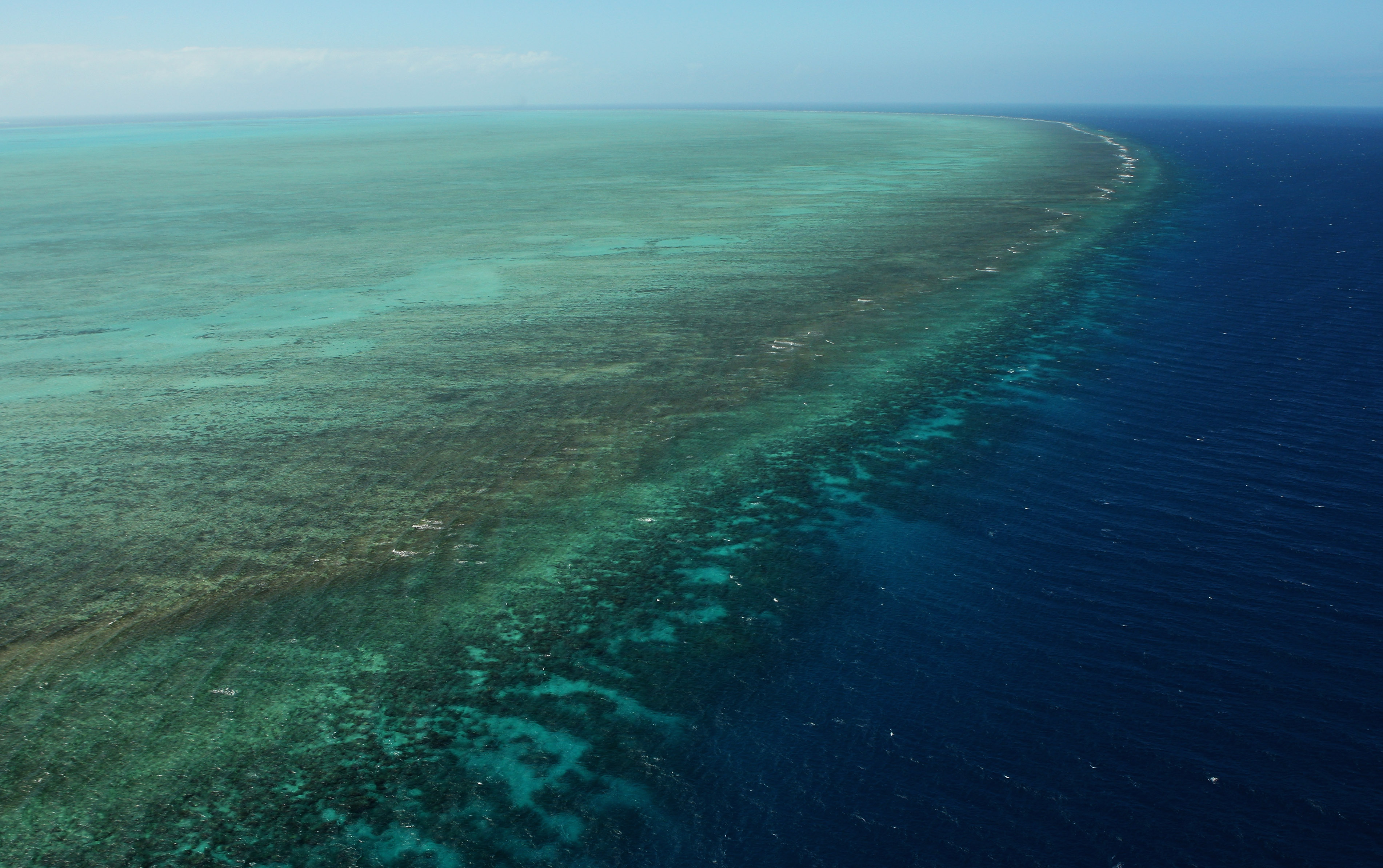 Risks to Great Barrier Reef Could Thwart Tycoon’s Coal Plans
Ex-lawmaker Clive Palmer wants to build a mine that would operate for 19 years. 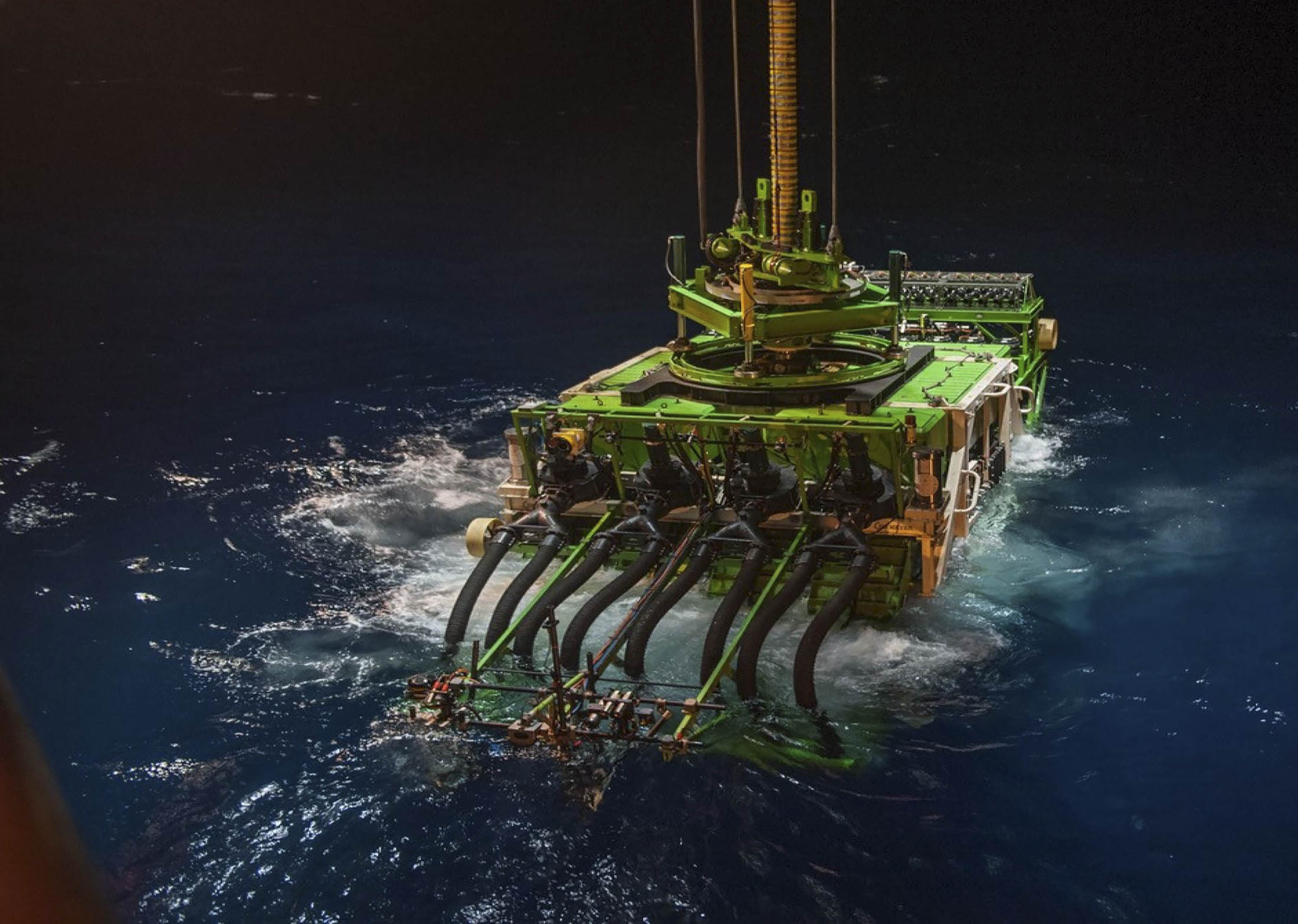 Deep-Sea Mining Robot Lost on Cobalt-Rich Floor of Pacific
It malfunctioned on a test mission to bring up rocks rich in cobalt and nickel from the the Pacific Ocean.
NextEra Plans to Harness Landfill Gas to Make Renewable Fuel
It adds to a series of projects seeking to cash in on the energy source while helping cut greenhouse-gas emissions.
Previous Post

Bloomberg: Markets Give Powell a Break. It May Be Transitory

Bloomberg: Markets Give Powell a Break. It May Be Transitory