From the BLS: Job Openings and Labor Turnover Summary

The number of job openings increased to 6.6 million on the last business day of July, the U.S. Bureau of Labor Statistics reported today. Hires decreased to 5.8 million in July. Total separations was little changed at 5.0 million. Within separations, the quits rate rose to 2.1 percent while the layoffs and discharges rate decreased to 1.2 percent. These changes in the labor market reflected an ongoing resumption of economic activity that had been curtailed due to the coronavirus (COVID-19) pandemic and efforts to contain it.
emphasis added

This series started in December 2000.

Note: The difference between JOLTS hires and separations is similar to the CES (payroll survey) net jobs headline numbers. This report is for July, the most recent employment report was for August. 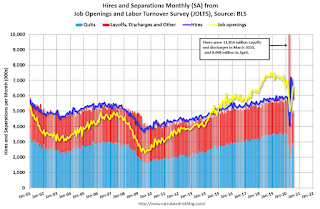 The huge spikes in layoffs and discharges in March and April 2020 are labeled, but off the chart to better show the usual data.

The number of job openings (yellow) were down 8.5% year-over-year.

Quits were down 18% year-over-year. These are voluntary separations. (see light blue columns at bottom of graph for trend for “quits”).

Job openings increased in July, but were still down YoY – and quits are down sharply YoY.

OP: The Higher They Climb…

OP: The Higher They Climb...