S&P/Case-Shiller released the monthly Home Price Indices for June (“June” is a 3 month average of April, May and June prices).

This release includes prices for 20 individual cities, two composite indices (for 10 cities and 20 cities) and the monthly National index.

“Housing prices were stable in June,” says Craig J. Lazzara, Managing Director and Global Head of Index Investment Strategy at S&P Dow Jones Indices. “The National Composite Index rose by 4.3% in June 2020, as it had also done in May (June’s growth was slightly lower in the 10- and 20-City Composites, which were up 2.8% and 3.5%, respectively). More data will be required to understand whether the market resumes its previous path of accelerating prices, continues to decelerate, or remains stable. That said, it’s important to bear in mind that deceleration is quite different from an environment in which prices actually fall.

“June’s gains were quite broad-based. Prices increased in all 19 cities for which we have data, accelerating in five of them. Phoenix retains the top spot for the 13th consecutive month, with a gain of 9.0% for June. Home prices in Seattle rose by 6.5%, followed by Tampa at 5.9% and Charlotte at 5.7%. As has been the case for the last several months, prices were particularly strong in the Southeast and West, and comparatively weak in the Midwest and (especially) Northeast.”
emphasis added 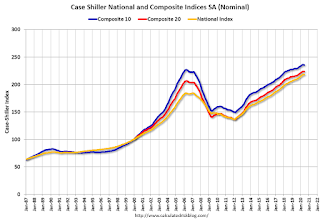 The first graph shows the nominal seasonally adjusted Composite 10, Composite 20 and National indices (the Composite 20 was started in January 2000).

The Composite 20 index is 8.3% above the bubble peak, and unchanged (SA) in June. 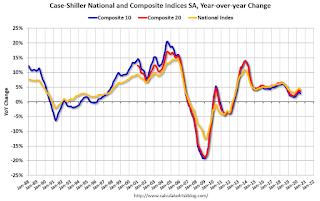 The second graph shows the Year over year change in all three indices.

The National index SA is up 4.3% year-over-year.

Note: According to the data, prices increased in 12 of 20 cities month-over-month seasonally adjusted.

Price increases were slightly below expectations.  I’ll have more later.