Continued claims decreased last week to 15,486,000 (SA) from 16,090,000 (SA) the previous week. Continued claims are now down 9.4 million from the peak, suggesting a large number of people have returned to their jobs (as the last three employment reports showed).

There are another 10,723,396 people receiving continued PUA. 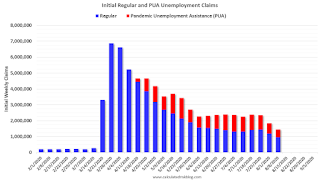 This was the 21st consecutive week with extraordinarily high initial claims, however initial claims have declined over the last two weeks.

We are probably seeing some layoffs related to the higher level of COVID cases and also from the end of some Payroll Protection Programs (PPP).