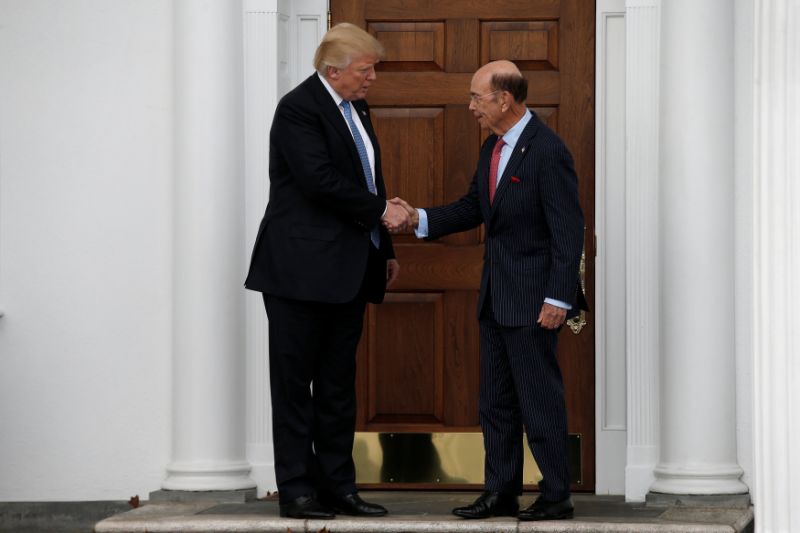 Billionaire investor Wilbur Ross singled out changes to the nation’s free trade agreement with Mexico and Canada on Wednesday as “the first thing” he would address if confirmed to lead the Commerce Department in President-elect Donald Trump’s administration.

Speaking before the Senate commerce committee, Ross argued that the United States should open its economic borders to countries that “play by the rules.” But those that do not, he said, “should be punished — severely.” Ross did not elaborate in his early remarks on what those punitive measures might entail, although Trump has repeatedly called for a border tax on U.S. companies that offshore jobs and sell their products back home.

“I am not anti-trade. I am pro-trade,” Ross said. “But I am pro sensible trade, not pro trade that is to the disadvantage of the American worker and the American manufacturing community.”

[In West Virginia coal country, voters are ‘thrilled’ about Trump]

Trump made renegotiating the nation’s trade agreements a centerpiece of his presidential campaign, tapping into the frustration of many middle-class workers who have felt left behind by globalization. Since his election, Trump has already begun wielding the power of the bully pulpit.

He has taken individual companies such as Ford, General Motors and Toyota to task for investing in Mexico, sending their stock prices plummeting. But he has also touted new U.S. jobs created by telecom giant Sprint and pharmaceutical maker Bayer AG.

[How a week of Trump tweets stoked anxiety and moved markets]

Ross was a close adviser to Trump during the election, and he is slated to take the leading role on setting trade policy in the new administration. Trump has named economist Peter Navarro to head a newly created manufacturing council within the White House and picked trade veteran Robert Lighthizer as the U.S. trade representative in charge of negotiating agreements.

In his first hour of testimony, Ross did not detail how he would rethink NAFTA. Trump called for a blanket 35 percent tax on Mexican imports and a 45 percent tariff on goods from China. In a recent interview with the German newspaper Bild, he suggested imposing a 35 percent tax on German cars sold in the United States as well.

It is unclear if those measures are part of the border tax that Trump has long touted, and international trade experts say they are likely a violation of long-standing treaties. In a recent Wall Street Journal interview, Trump criticized a controversial tax plan by House Republicans intended to discourage imports known as “border adjustment.”

Ross suggested Wednesday that tariffs were an essential component of U.S. trade policy.

“I think tariffs play a role both as a negotiating tool and to punish offenders that don’t play by the rules,” he said.

Trump’s top trade advisers have also raised concerns about China’s growing power in the world economy. Navarro has been particularly dire in his warnings, writing a book entitled “Death By China.” Ross sounded a stern but less strident tone in his testimony Wednesday, and he made no mention in the first hour of questioning of Trump’s pledge to label China a currency manipulator on the president-elect’s first day in office.

“China is the most protectionist country of very large countries,” Ross said.

[How will Trump change trade relations with China? Here’s what you need to know]

His testimony was briefly interrupted early on by protesters criticizing Ross for his early support of the sweeping trade agreement with Asia known as the TransPacific Partnership, one of President’ Obama’s signature achievements. The deal has since become politically toxic, and Trump has vowed to pull out of the agreement once in office.

Ross said Wednesday he changed his mind after analyzing the details of the agreement, raising concerns about what he said were lax requirements on auto parts manufacturing.

“I came across some things that I felt were not consistent with things that had been advertised,” he said.

Ross also highlighted proposals to incentive domestic growth, including spending on infrastructure. During the campaign, Ross and Navarro suggested a $137 billion tax credit that they said could spur $1 trillion in private sector spending on infrastructure projects with a regular revenue stream, such as toll roads. That proposal was widely panned by economists as unrealistic, but Ross defended it on Wednesday.

“The infrastructure needs of this country are so monumental that we need any available source of capital in order to meet it on a timely basis,” he said.

Ross said the tax credits should be one of several efforts by the federal government to boost infrastructure spending. Several top Republican lawmakers have questioned the need for additional government spending, however, and Ross did not propose a way to pay for those proposals.

Read this article in its original format at The Washington Post