From the Dallas Fed: Recovery Continues in Texas Manufacturing

Texas factory activity expanded in August for the third month in a row following a record contraction in the spring after the onset of the COVID-19 pandemic, according to business executives responding to the Texas Manufacturing Outlook Survey. The production index, a key measure of state manufacturing conditions, came in at 13.1, down slightly from July but still indicative of moderate growth.

Other measures of manufacturing activity also point to expansion this month. The new orders index advanced three points to 9.8, and the growth rate of orders index surged more than 10 points to 11.8. The shipments index rose from 17.3 to 23.3, while the capacity utilization index inched down but remained positive at 10.9.

This was the last of the regional Fed surveys for August.

Here is a graph comparing the regional Fed surveys and the ISM manufacturing index: 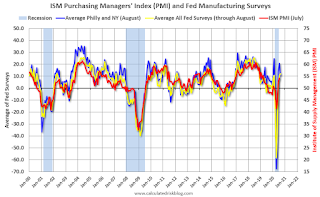 Note that these are diffusion indexes, so returning to 0 (or 50 for ISM) means activity is not declining further (it does not mean that activity is back to pre-crisis levels).

How Technology Moves From Disruption to Invisibility