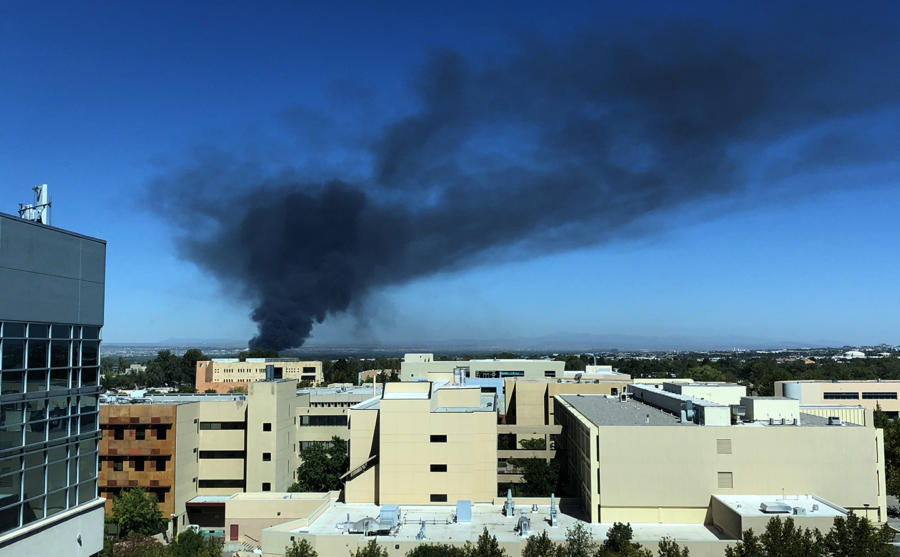 A plume of black smoke seen from the Northeast Heights rises from the fire last week at Friedman Recycling. (Eddie Moore/Albuquerque Journal)

A proposed increase in trash collection fees and billowing black smoke from the city’s recycling contractor last week have rekindled interest in the city’s garbage bills, recycling program and mounds of flammable recyclables warehoused in the city.

Mayor Tim Keller’s fiscal 2021 budget proposal includes raising monthly trash collection rates 10.3% on residential customers, about $1.55 a month. City officials say the rate increase for operating costs is necessary due to depressed markets for recyclables, surges of illegal dumping and graffiti during the pandemic, and lost revenue from 550 business customers.

But the Solid Waste Department is also facing an estimated $1.6 million in lost revenue because the previous administration handed it responsibility for maintaining and picking up litter on street medians. And it’s also in charge of cleaning up the city’s burgeoning homeless encampments.

Yes, all that cleanup needs to happen, and the city is the obvious go-to entity, but forcing trash customers to pick up a tab that should belong to all taxpayers is just, well, garbage. They pay to get their own trash picked up, not to pick up after every slob in the city limits.

Meanwhile, a global recycling crisis spurred largely by China raising standards for the recyclables it accepts has dramatically changed the marketplace and increased the cost of community recycling programs.

Albuquerque Chief Operating Officer Lawrence Rael told the Journal Editorial Board last week that the city is not currently earning any money from selling recyclables and instead is having to pay to have recyclables housed at the Friedman Recycling facility at 5029 Edith Boulevard NE, where a large blaze erupted last week as stacks of cardboard and plastic caught fire in the facility’s parking lot. Huge columns of black smoke billowed, prompting an air quality health alert. It was the second fire at the Friedman facility in the past two years.

And that should raise public health concerns around warehousing trash in the city. Conservation is important, and we need to extend the life of our landfill. It’s also comforting to learn from Rael that all that garbage we are rinsing with our scarce water is not ending up there, but the fact it is being stockpiled in the center of town waiting for a spark – the cause of the fire is still under investigation – is not.

If approved by the City Council, the proposed rate increase would take effect Jan. 1 and generate an estimated $1.76 million more annually. The last rate increase for day-to-day Solid Waste operational costs was in 2012.

We expect a lot from the Solid Waste Department and its workers. Theirs is one of those thankless jobs that defines a city. They need to be fully funded. And the department has had additional responsibilities added to its to-do list. But raising rates for any city service during a pandemic that has devastated family budgets needs to be looked at carefully, and switching from essentially a user fee to a tax on others’ bad behavior deserves serious discussion.

And that huge Friedman Recycling fire and health alert should have the city and the company looking at potentially relocating operations outside the city’s main airshed.

This editorial first appeared in the Albuquerque Journal. It was written by members of the editorial board and is unsigned as it represents the opinion of the newspaper rather than the writers.

Inside Amazon’s “whirlwind courtship” of Whole Foods, as told by the grocery chain’s founder John Mackey

Danny’s View: $1.9 Trillion In Options Expired On Friday And The Bulls Were Saved