Kolanovic: the next fast 10% up

King Kolanovic, market strategist god at JPM, had a call for institutional investors where he talked about his continued bullish risk-on views:

2. vaccines "cure" COVID – there is no more sell-off potential in equities based on 2nd wave or other COVID related things

3. CBs rule the world and the direction for equities is up; partly from the actual bid and partly from driving up multiples

4. positioning when looked at over the longer horizon is still below average. More room for re-leveraging from the systematic and hedge fund community in 2021

5. value and cyclicals have further to go

7. USD is in a bear market and will trade lower

8. all "known known" risks are manageable

As much as we respect Kolanovic it is hard to tell if this is starting to become consensus or if this already is very consensus. However, maybe 2021 or at least the start of 2021 is one of these very rare moments in markets when it actually pays off to be part of the consensus crowd. 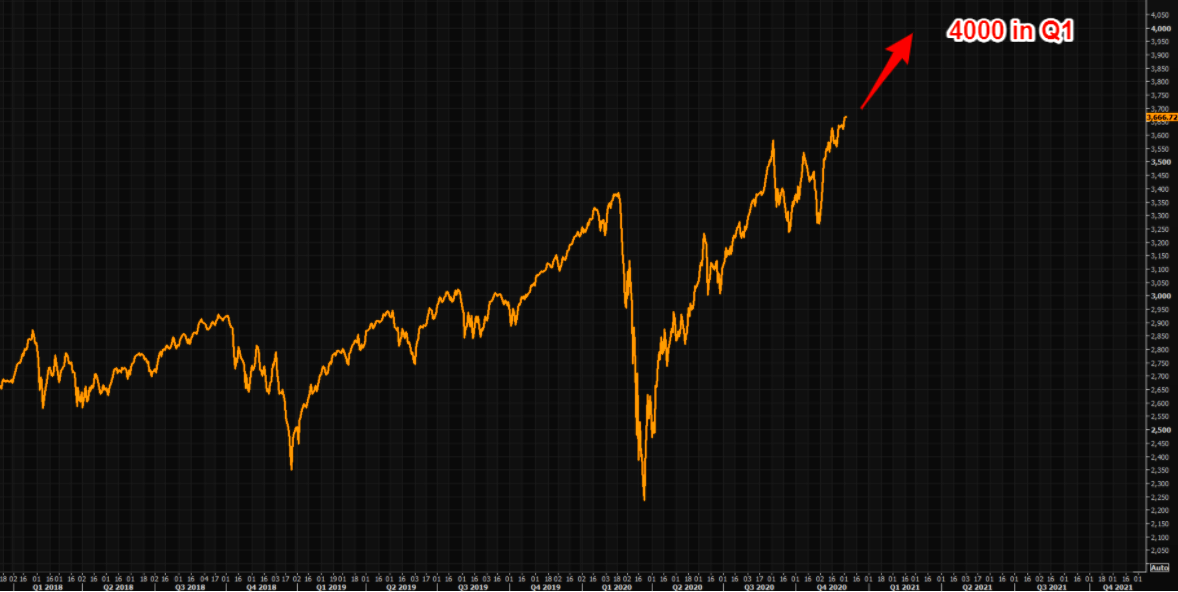 As we have been writing for weeks, the USD crash has yet to "feed" over to the pro cyclical currencies. In mid November we outlined the biggest trading implication going forward was that the DXY weakness was about to spill over to more exotic countries such as Brazil, we wrote;

"Global demand should be lifting all boats, commodities exporting countries as well,and BRL is a big one in this space….If the vaccine news start spilling over for real, laggards such as Brazil ETF, EWZ might get the second leg going."

CS notes this accurately, the DXY short is big, but in defensive crosses. The chart shows clearly the huge difference in the short "distribution" this time compared to last time we had such big dollar shorts, 2011.

Frequent readers know TME's logic on the relative long EM logic, but more importantly, the long in "exotic" places such as Brazil that has outperformed most assets lately. People still do not understand that the biggest EM ETF, EEM, actually is mostly a play on Chinese tech and not "traditional" EM pro cyclical plays, chart 2.

If you believe in the DXY collapse spreading further and impacting "real" EM going forward, Brazil is one of those places to be in. The EWZ vs SPY ratio has popped higher, but the recent pop is just a blip on the longer term chart (chat 3).

Chart 4 is showing the clear out performance by Brazil over EEM. Yes, as we wrote above;

"if If the vaccine news start spilling over for real, laggards such as Brazil ETF, EWZ might get the second leg going."

Mighty Yuan matters – could it lead to soaring yields?

We have seen the Yuan put in the sharpest bull move in "forever" since May 2020. We won't go into the details of why, but Xi has played poker well with Trump. Add to that the latest multilateral Asian regional trade deal recently agreed upon.

China is the biggest relative winner of 2020, with accelerating growth and the Chinese economy becoming more important by the day.

With China's economy outperforming and the Yuan outperforming pretty much any major FX we ask ourselves if the Yuan appreciation and the inflationary global force soon becomes a "narrative" when yields start catching up? The gap between US 10 year and the Yuan has widened notably over past months. 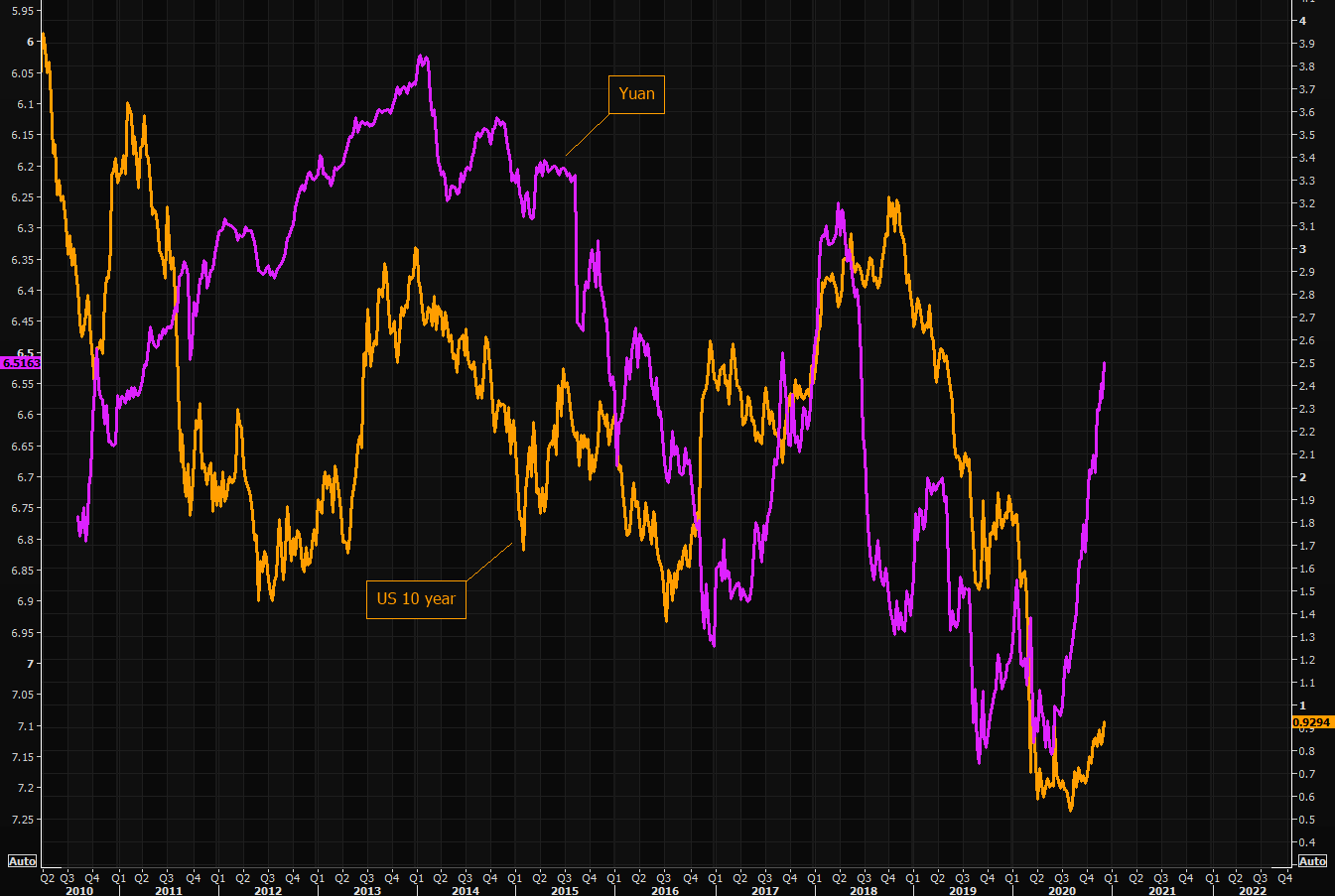 Yuan/USD – what if the "default mode" stops?

The mighty Yuan rising reminds us of the Deutschmark status back in the days when it was the anchor of Europe (suddenly we feel the nostalgia…).

The rise in the Yuan is occurring at a time when US inventories are very low. There are 3 possible dynamics from the current Yuan/USD move;

1, US restocks…passing over the "cost" to Asian producers, resulting in Asian margins crushed (this has been the "trade" for the past decade or so)

2, US restocks….unable to pass on the "cost" to consumers big players such as Amazon etc take the hit from the Yuan appreciation affecting margins

3, US restocks…importers pass on the cost to the consumer…ultimately feeding over to inflation, with the yield curve steepening, value outperforming etc

The first scenario has been the "default" dynamic for a long time and it still seems what the market is pricing in as the main scenario. The question is whether the Yuan appreciation and the dollar break down feed over to one of the other scenarios unfolding.

We are looking at the MOVE index closely for "clues". 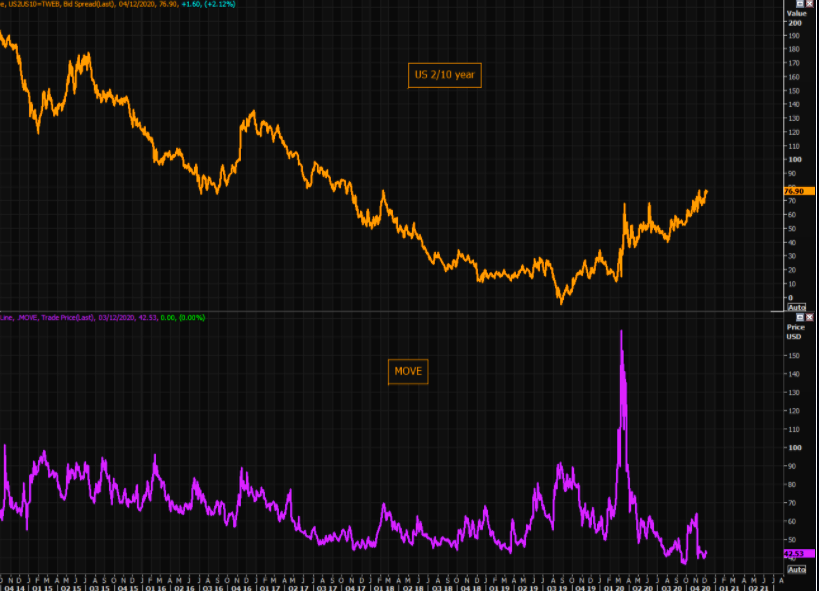 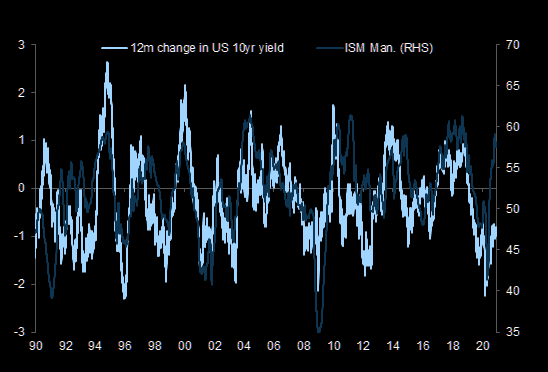 Gold bounced violently higher having reached the trend channel lows five sessions ago. From almost 1760 to 1850 is not bad. Note that the big negative trend channel remains intact, and that the 21 day moving average is approaching quickly.

Don't be emotional about gold here, it was a great bounce.

The biggest problem with the long gold logic most gold bulls refuse to admit is the opportunity cost. Why hold gold when everything else is going higher (in this mania)?

…but inflation expectations are going up.

Yes, but did you know inflation expectations and gold have been negatively correlated since 2000. With inflation having stayed so low, gold has become a hedge of other risks, deflation is one (chart 3). 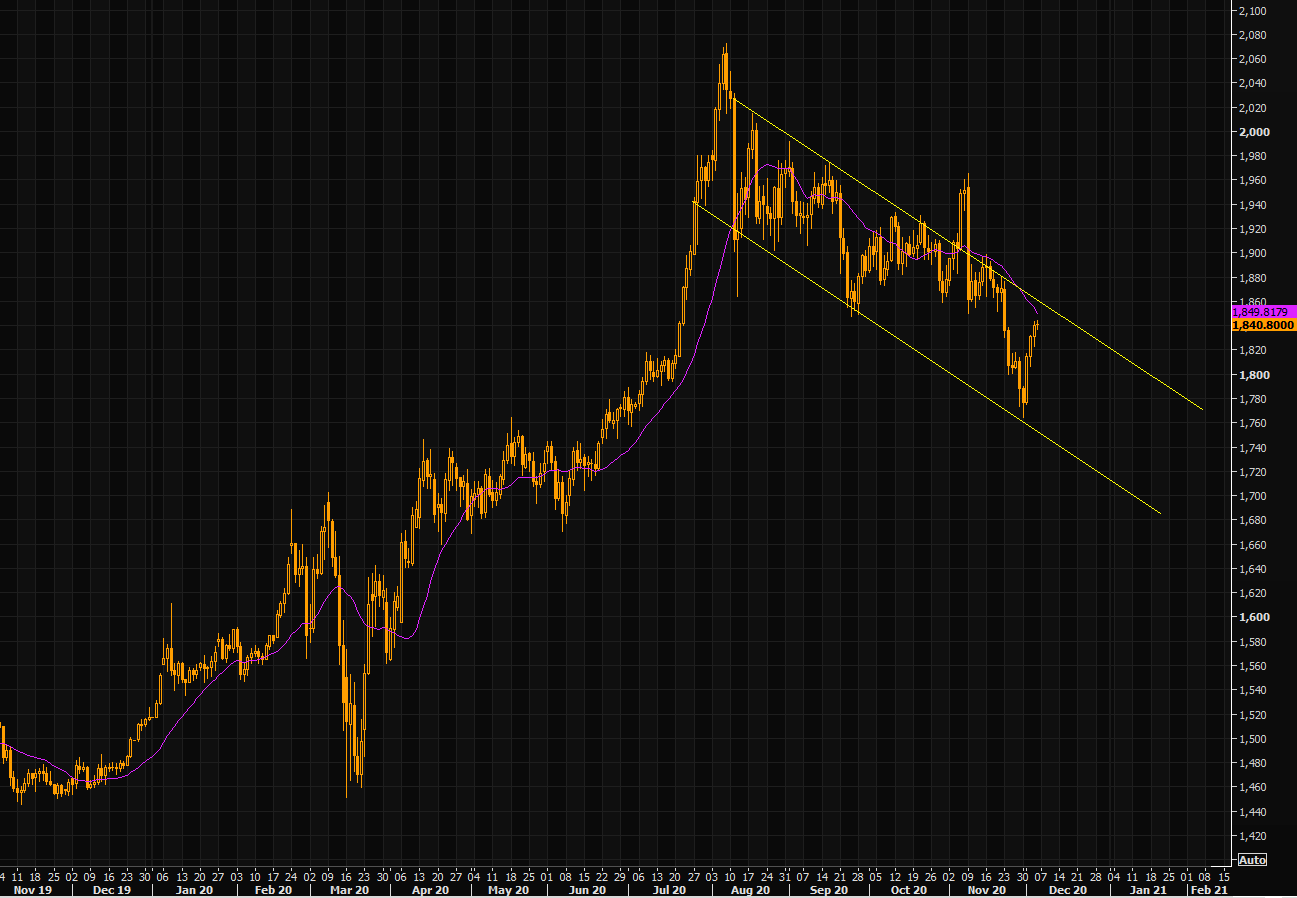 In the long run, 100% probability to make money in equities

With any semblance of a long holding period, it’s been fairly hard to lose money on the long side of the S&P (based on data going back to 1945) 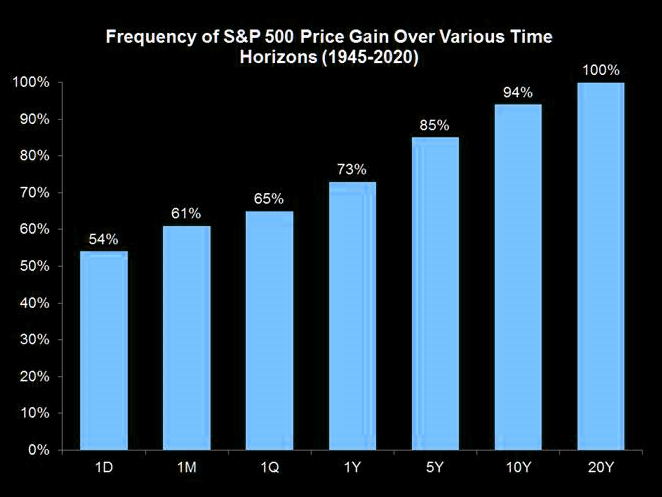 Consumer spending increased by 0.4pp over the last week to 97.6% of its pre-virus level, up from a bottom of 82% 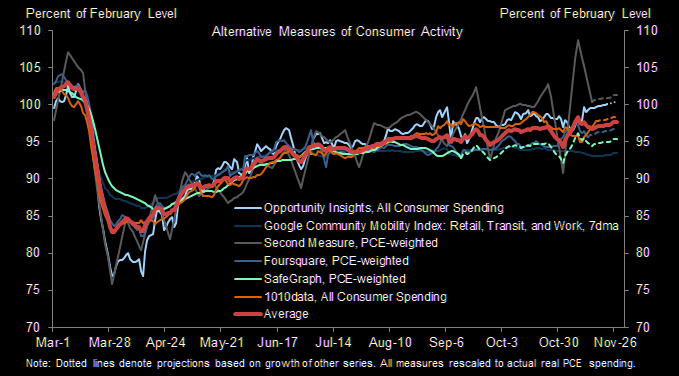 "Bro, I bought Bitcoin coz the dollars is crashing"

You were accurate on the dollar, lost money/flat on the BTC leg, but consider what happens should the dollar bounce?

Yes, this is the 10 min chart dating back to Nov 24, but still worth asking yourself…especially if you can't take 10% moves. 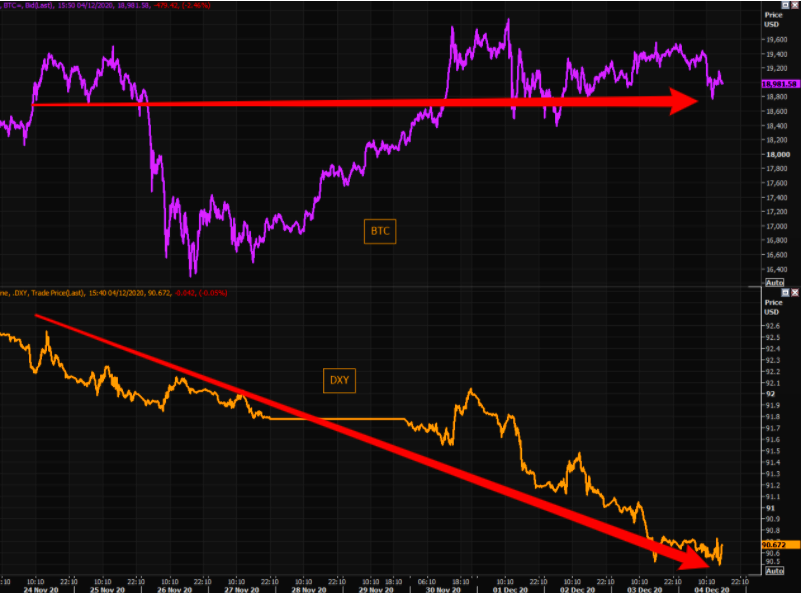 Let's see where this ends, but Russell has left the 200 day moving average far behind. Noteworthy is that Russell has failed to attract the gamma frenzy we saw during the NASDAQ melt up in August. There is very little gamma as we squeeze higher, and it actually turns small positive (chart 2). 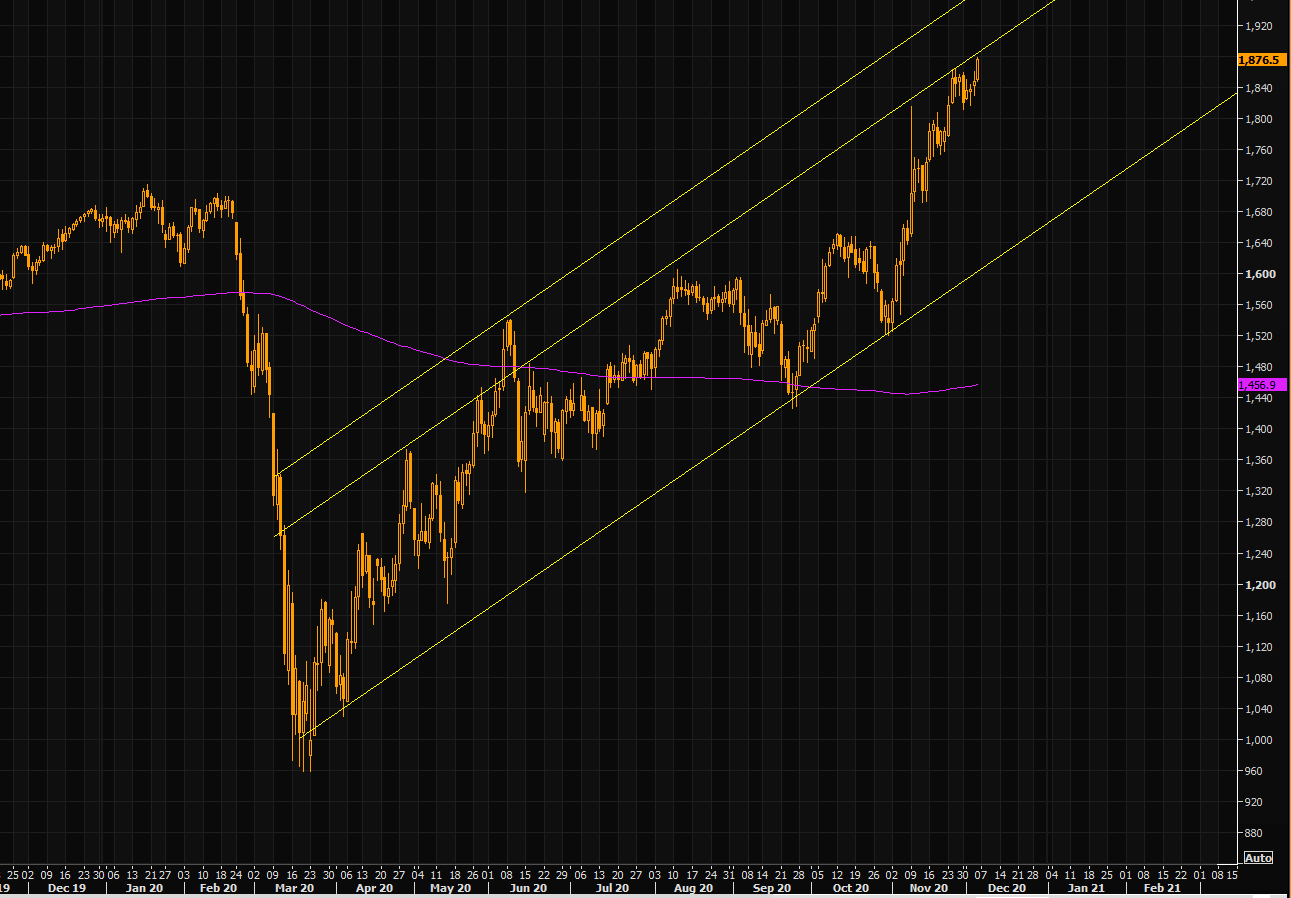 BofA outlines it once again;

…and what to expect next year?

looks like tailwind becoming headwind in 2021, but no "real" bear market without Fed tightening.

One of the sectors to watch for possible clues (TME has been writing about over past weeks) is the Chinese tech space as a potential canary.

BofA's bull and bear indicator remains one of the longer term indicators out there. It has remained in bearish territory (contrarian buy) for a big part of the move higher but is now entering rather bullish levels (soon contrarian sell). 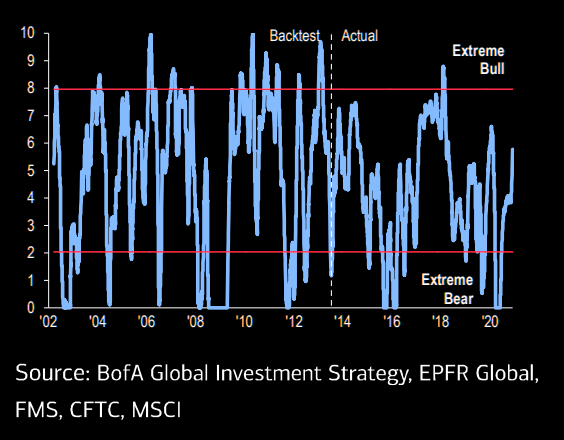 Looks from lower for longer to steeper for longer. Fed has managed supressing bond volatility, but we doubt MOVE will stay lower for much longer… 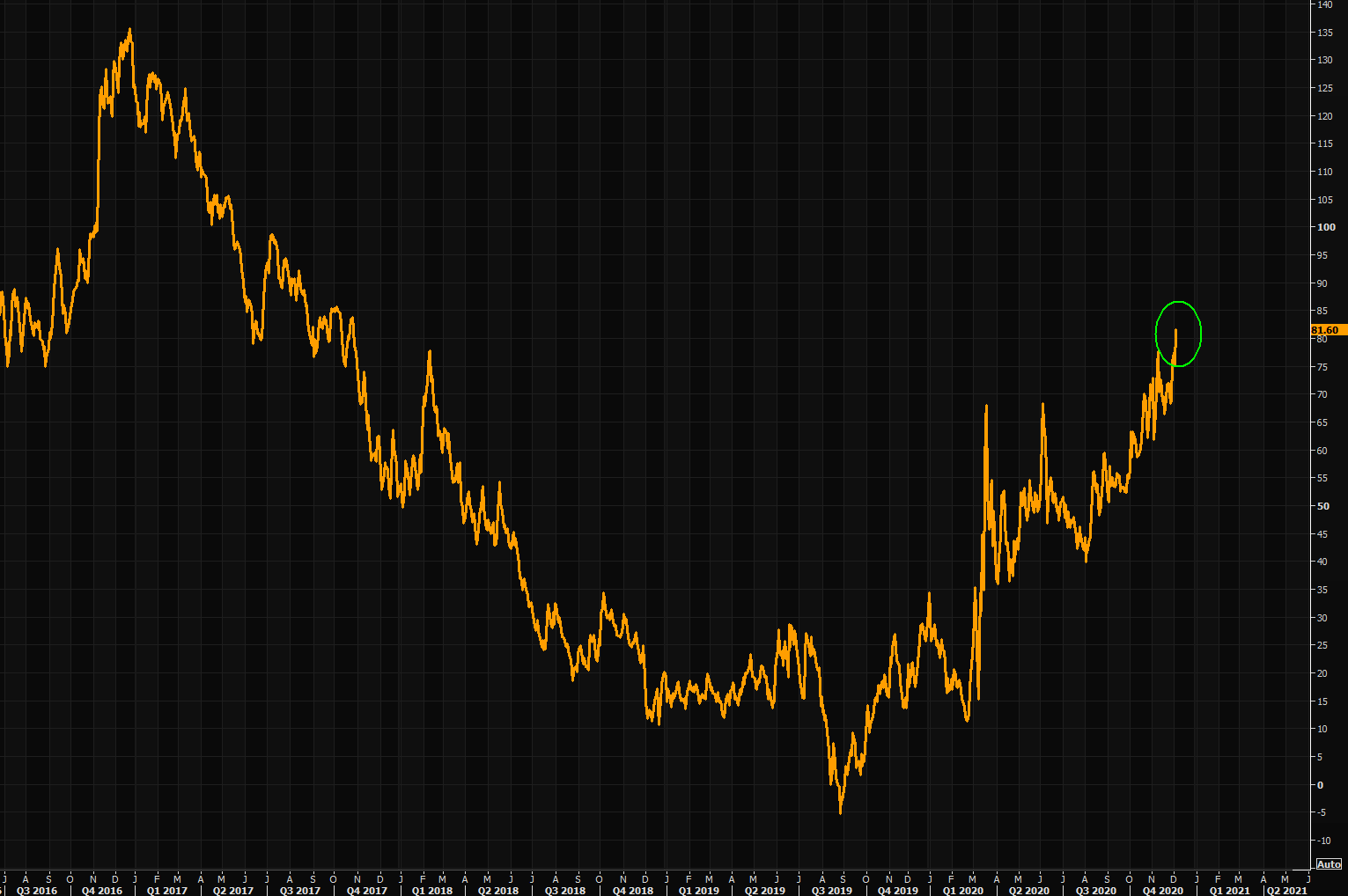 Emerging markets to DXY – thank you for playing

The most recent DXY implosion has fuelled a lot of the latest EM bull. Frequent readers of TME know that the most preferred logic was looking beyond the EEM. Brazil has been one of those assets to watch. A dog that turned a star pretty much overnight.

As a short term "inflection" point set up a lot of the DXY plays have delivered impressive moves, but time has come to think about the risk for possible pullbacks given the moves.

DXY trades horribly bad, but has a possible level here.

Main Brazil ETF, EWZ, along other EM related ETFs have performed very well, but chasing them here is starting to feel a little late. EWZ RSI has shot up violently higher, and yes overbought can stay overbought, but after such big moves you should expect at least a consolidation (chart 2).

(Given the vol crash you can replace longs with cheap upside if you still want to keep exposure to the upside).

DXY thank you, but time to move along… 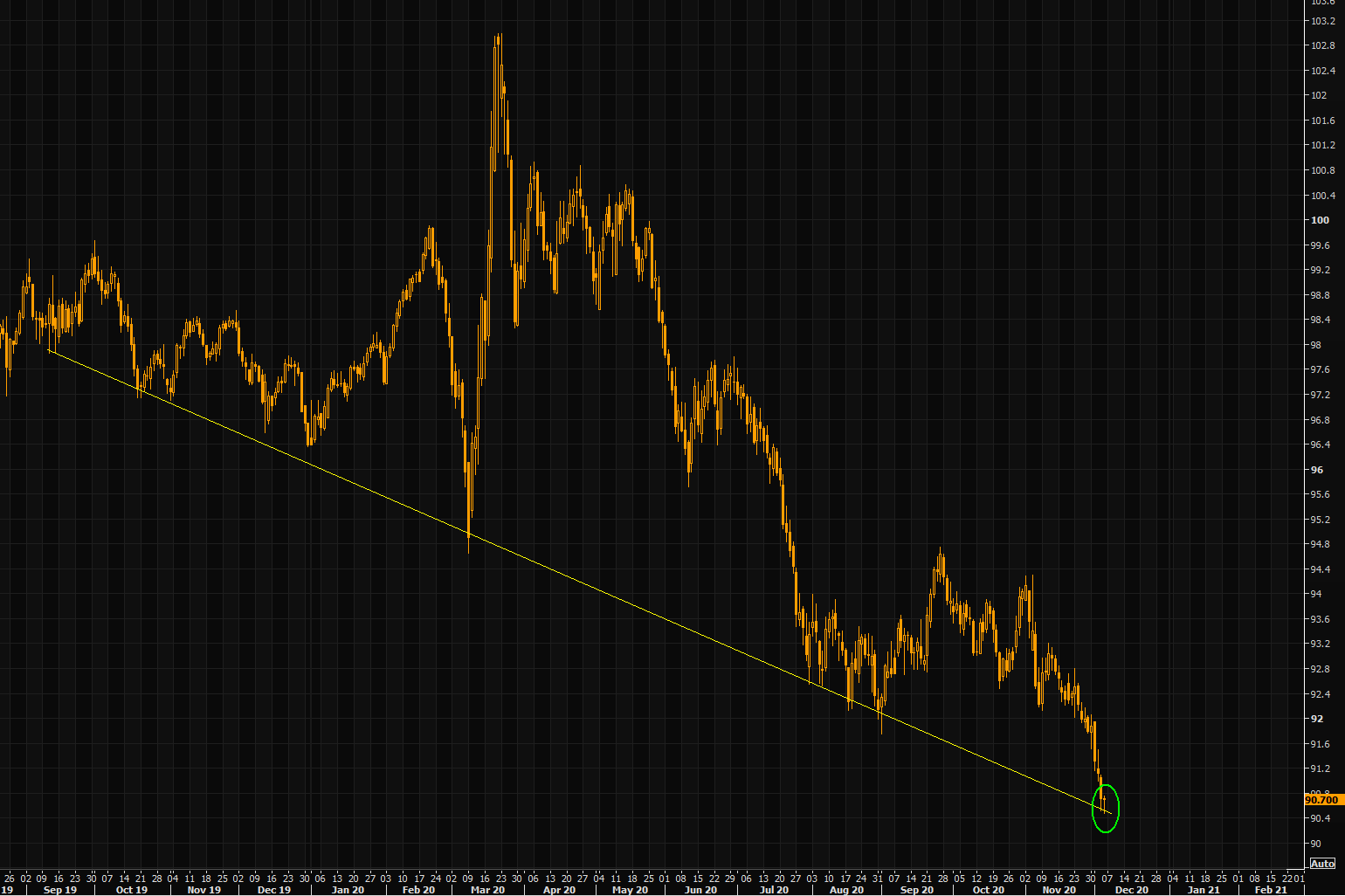 Someone should do a rap song about Powell – Original spending Gangster

At their daily peak in March, the Fed was buying $75bn bonds per day. if one assumes a 9-hour trading day, that was approximately $140mm bonds per minute. Makes all these lyrics about crystal and amex black look small time. 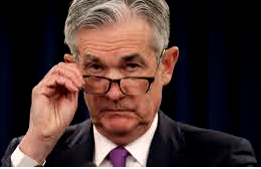 Can I please pay you to lend you money?

" you are now for the first time happily paying for the privilege of lending money to corporates in the US in real terms. Congratulations!"

We truly live in interesting times… 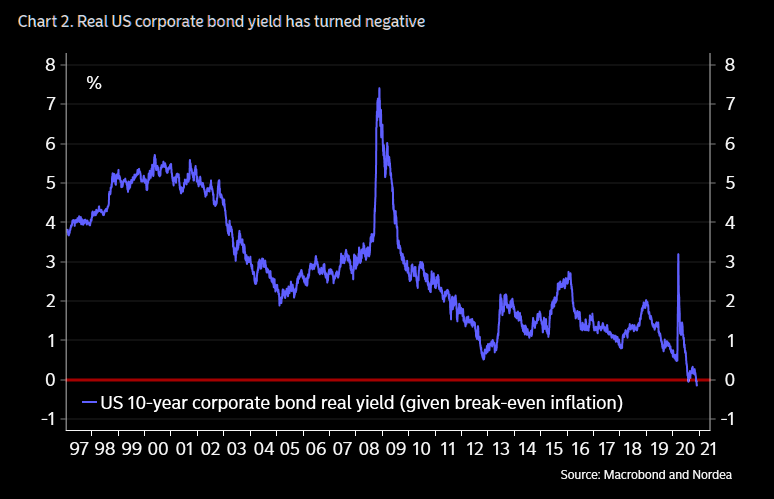