China is cutting tariffs; the impeachment process has come to an end and the market is at new all-time highs. The coronavirus is still a concern, but apparently not as much as it was less than one week ago. Progress has been made. Official emergency declarations have mobilized a stronger response. China has quickly built additional hospitals and work is underway on a treatment. Gilead (GILD) appears to be the first to offer a potential cure although its drug remdesivir has not been approved to cure any disease yet. These recent developments along with solid earnings, have been the fuel to reverse the market’s late January retreat in just a few trading sessions this month. 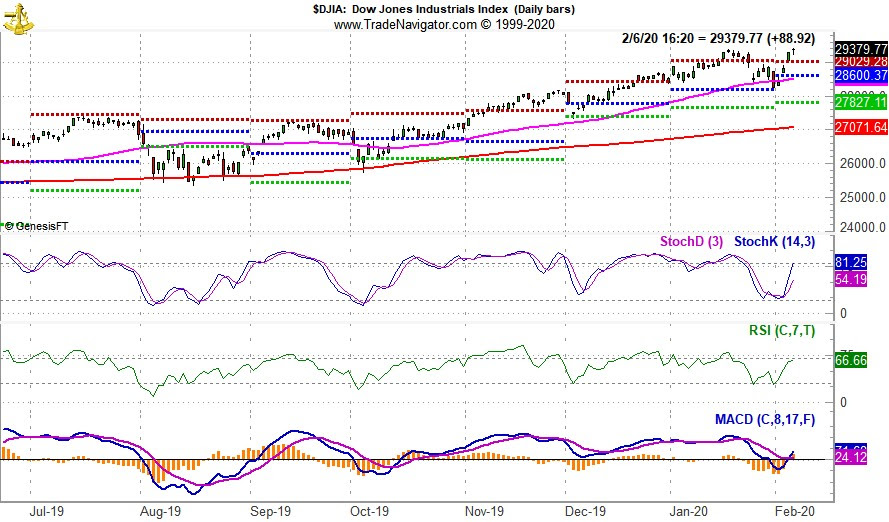 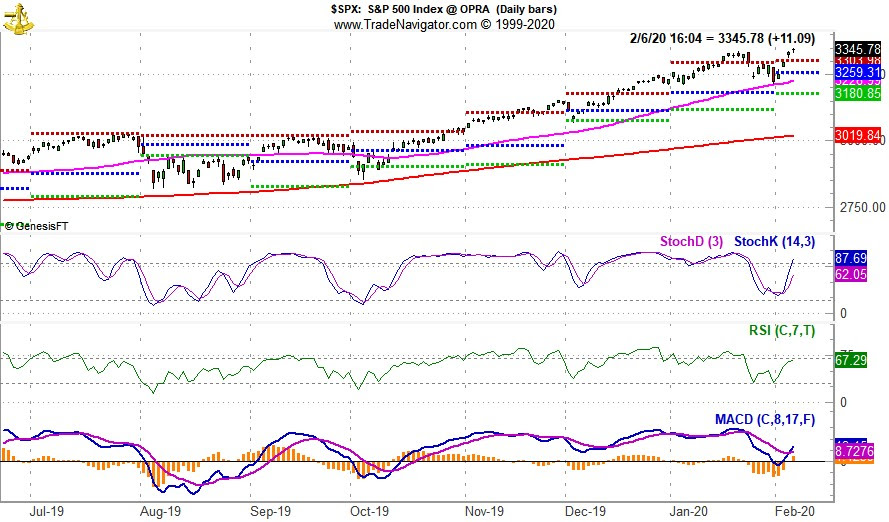 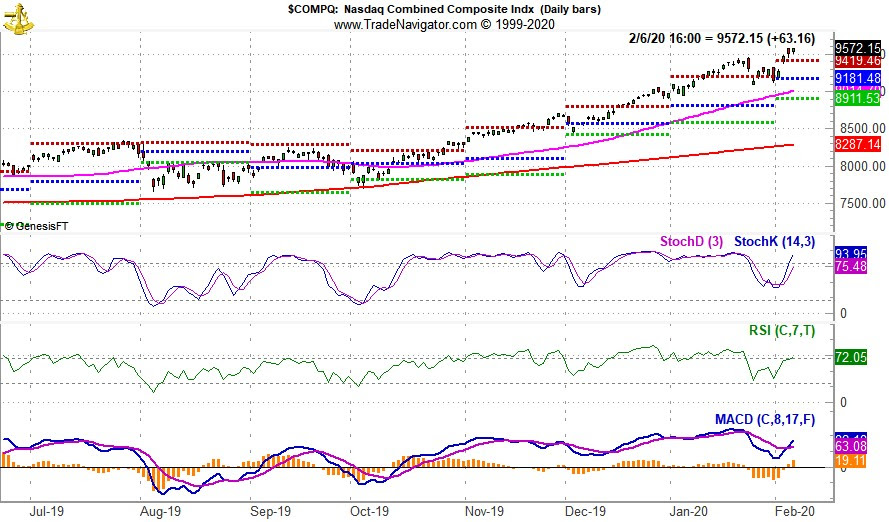 In the above charts, the market’s strength since October can be seen along with second half of January weakness. DJIA, S&P 500 and NASDAQ have remained comfortably above their respective 200-day moving averages since October. In January only DJIA actually (and briefly) closed below its even higher 50-day moving average. The market’s rebound surge in February has also reversed negative readings from Stochastic, relative strength and MACD indicators.
Momentum clearly favors the bulls and January’s negative finish remains unconfirmed as of today. As long as economic data and corporate earnings remain positive then the market is likely to continue the trend that has been in place since last October, higher. There are likely to be some dips along the way with the next possible soft patch arriving when earnings season nears its end later this month and/or in the first half of March.
Sector Rotation ETF Portfolio Update
January may have closed on a sour note, but February has gotten off to a strong, above average start. Strength has been relatively broad-based with technology leading overall. As of yesterday’s close, four technology-related positions, iShares NASDAQ Biotech (IBB), iShares DJ US Tech (IYW), iShares PHLX Semiconductor (SOXX) and SPDR Technology (XLK) are all up more than 20% since being added to the portfolio in October. As a result of this strong showing by tech, the average portfolio open position gain is now 13.0%
With growth capturing the majority of attention other areas have been lagging. Vanguard REIT (VNQ) has been essentially left for dead, up just 2.4%. Another lagging position, iShares DJ US Telecom (IYZ), was stopped out January 31 for a modest gain of 2.3%.
Recent energy and copper related trades did not fare well in January as the coronavirus initially began to spread rapidly triggering quarantines, evacuations and emergency declarations. The potential unknown impacts of the virus on global economic growth hit copper and energy first. SPDR Energy (XLE), United States Copper (CPER), Global X Copper Miners (COPX), First Trust Natural Gas (FCG) and United States Natural Gas (UNG) were all stopped out.
The selloff in copper and energy appears to be overdone especially when the broader markets performance is taken into consideration. XLE, CPER, COPX, FCG and UNG can all be considered at current levels up to their respective buy limits. New buy limits and stop losses for these new trades appear in the Sector Rotation Portfolio table below.
With the exception of today’s trade ideas, all other positions in the portfolio are currently on Hold. Due to recent gains, numerous stop losses have been updated. Please see table below for updated stop losses.

Tactical Seasonal Switching Strategy Portfolio Update
Even though January was down, we remain bullish for the balance of the Best Six/Eight Months as other patterns and indicators have thus far failed to provide backup for the negative reading. The market has quickly reversed direction and is once again trading at new all-time highs.
As of yesterday’s close, the Tactical Seasonal Switching Strategy portfolio has an average gain of 13.2% since our Seasonal Buy Signal in October. Invescos QQQ (QQQ) has led the way higher and was up 19.4% as of yesterday’s close. SPDR DJIA (DIA) is still the laggard. All positions in the portfolio are on Hold.
Please note, positions in the Tactical Switching Strategy portfolio are intended to be held until we issue corresponding Seasonal MACD Sell Signals sometime on or after April 1. As a result, no stop loss is currently suggested on these positions.