Global Banking: Some Sectors Look as “Precarious as Ever”
“Financial flameouts” are occurring despite relief from the European Central Bank

Most people remember that the entire global financial system teeter-tottered on collapse during the 2007-2009 financial crisis due to the debacle related to subprime mortgages.

As you’ll recall, even a financial institution as large as Citigroup was brought to its knees.

Of course, that was more than a decade ago and the fear of a “financial Armageddon” would seem to be a distant memory.

However, here in 2020, some European banking sectors appear to be on shaky ground, despite the European Central Bank’s regulatory relief.

As a Sept. 17 Bloomberg article notes:

With a looser leverage ratio for the next nine months, banks will be able to make more loans with less capital.

Mind you, this is a fourth round of regulatory relief. Even so, some of the Continent’s banks remain in a highly precarious position. 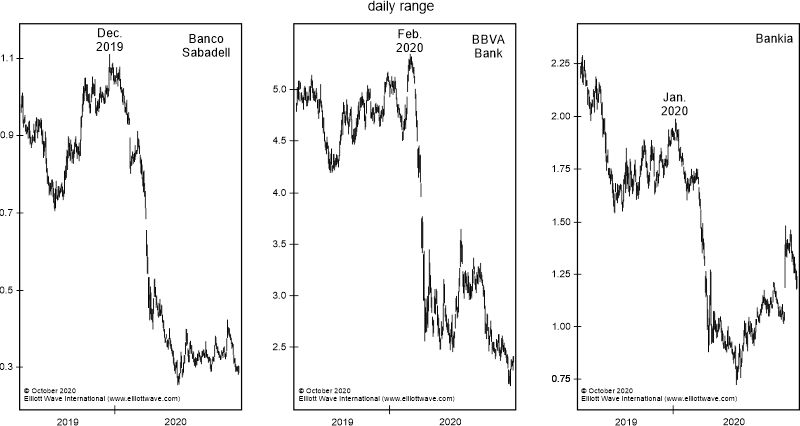 The ECB agreed to a fourth round of relief only because the previous three rounds failed. … In total, the four rounds of regulatory relief equated to €73 billion, yet, for all the ECB’s hard work, some banking sectors look to be as precarious as ever.

The snapshot comes from Spain, where Banco Sabadell, Spain’s fifth-largest banking group, has barely retraced any of its 73% crash since December 2019. BBVA also continues to make fresh new lows, and Bankia … is still off 33% since last year’s high.

Clearly, the weakening position of these banks, even with all the financial assistance, is not a good development.

Yet, there’s even more cause for concern.

The October Global Market Perspective also analyzes the “financial flameouts” of two other European banks, one of which is a global giant.

The financial woes of some European banks are just one sign of what appears to be a developing global deflation.

Prepare by reading the free report, “What You Need to Know Now About Protecting Yourself from Deflation.” Here’s an excerpt:

The structural aspect of deflation and depression is also a factor.

Get insights into the “structural aspect of deflation,” plus — learn how to defend yourself and your loved ones by following this link: “What You Need to Know Now About Protecting Yourself from Deflation.”

This article was syndicated by Elliott Wave International and was originally published under the headline Global Banking: Some Sectors Look as “Precarious as Ever”. EWI is the world’s largest market forecasting firm. Its staff of full-time analysts led by Chartered Market Technician Robert Prechter provides 24-hour-a-day market analysis to institutional and private investors around the world.