Hasbro continues to release Transformers franchise in all forms of entertainment including movies, television and digital expressions. Given the company’s several innovative and productive plans for Transformers franchise over the next 10 years, revenues are expected to grow. During second-quarter 2020, the company unveiled a crossover toy — Gigawatt — based on characters from the TRANSFORMERS and Back to the Future movie. It also launched the first issue cover of the four-part IDW comic book series based on the same.

On the product innovation front, Hasbro launched several social games. Among them, Dungeons & Dragons was particularly successful. The company further strengthened its digital gaming revenues with the launch of DROPMIX. It also plans to launch beer pong, Operation Pet Scan, a whole new line-up of new Monopoly games, Black Panther, beyond the home entertainment window for holidays, including product in the MARVEL LEGENDS series for Black Panther. It also intends to expand Magic: The Gathering Arena across its digital platform in China by the second half of 2020. Notably, the company will be partnering with Tencent for the same.

Notably, on the content side, E1 production is gradually recovering through a new animated series on Netflix and Alien TV. The team also continues to develop and produce new content for Peppa Pig, PJ Mask and My Little Pony feature film in 2021. Apart from this, it has executed a successful virtual con and developed more than 100 film and 60 new TV projects, including Hasbro IP and new IP. Notably, the company spent $220.4 million on content production in the first half of 2020. Going forward, cash spend projections for 2020 are estimated at $450 million to $550 million for content.

The company is witnessing strong gaming demand during the coronavirus pandemic. Hasbro has a supreme gaming portfolio, and it is refining gaming experiences across a multitude of platforms like face-to-face gaming, off-the-board gaming and digital gaming experiences in mobile. Given a strong product lineup and a greater focus on entertainment backed products, Hasbro’s Entertainment and Licensing segment is positioned well for growth. 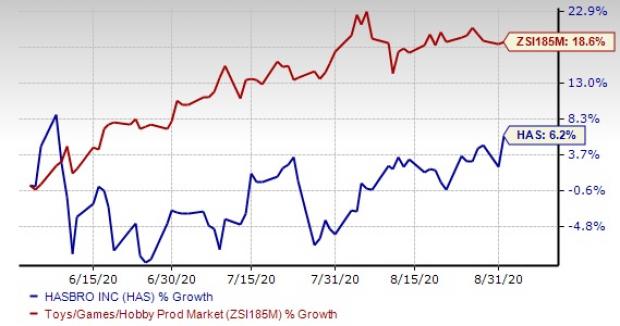 The company’s third-quarter results are likely to reflect the impact of the second wave of the coronavirus pandemic. It anticipates the pandemic to continue hurting every aspect of business from shipments to brick-and-mortar sales to delivery of content in order to meet demand. This along with temporary store closures, product shortages, lower retail inventories, supply chain disruption, live-action production shutdowns and changing theatrical release schedules are likely to hurt results in the days ahead.

Moreover, dismal international sales remain a concern. During the second quarter, International segment’s revenues amounted to $249.8 million, which declined 34% year over year. The segment’s operating margin came in at negative 10% against 3.9% reported in the year-ago quarter. The segment’s results in the quarter were impacted by dismal performance of European, Asia Pacific and Latin American regions. Moreover, coronavirus-induced store closures, product shortages and lower retail inventories hurt the international segment.

Some better-ranked stocks worth considering in the same space include Activision Blizzard, Inc. ATVI and Mattel, Inc. MAT. Both the stocks carry a Zacks Rank #2 (Buy). You can see the complete list of today’s Zacks #1 Rank (Strong Buy) stocks here.

Activision Blizzard has an impressive long-term earnings growth rate of 17.3%.

Shares of Mattel have increased 9.3% in the past three months.

The biotech sector is projected to surge beyond $775 billion by 2024 as scientists develop treatments for thousands of diseases. They’re also finding ways to edit the human genome to literally erase our vulnerability to these diseases.

Zacks has just released Century of Biology: 7 Biotech Stocks to Buy Right Now to help investors profit from 7 stocks poised for outperformance. Our recent biotech recommendations have produced gains of +50%, +83% and +164% in as little as 2 months. The stocks in this report could perform even better.