CME Group Inc., the world’s biggest futures exchange operator, reported a 27 percent rise in quarterly profit, as trading jumped both at home and abroad.
The rise was driven in large part by renewed market speculation over when the U.S. Federal Reserve will exit its bond-buying stimulus program, which helped buoy trading of CME’s flagship interest-rate futures contracts.
The results also suggested Chief Executive Phupinder Gill’s focus on international markets was paying off, as trading from Asia and Latin America rose to record highs. Overall trading at CME’s exchanges, which include the Chicago Board of Trade and the New York Mercantile Exchange, rose 16 percent to a daily average of 14.3 million contracts in the quarter.
Net income rose to $311.2 million, or 93 cents a share, in the second quarter, from $244.9 million, or 74 cents a share, a year earlier, the Chicago-based company said. Analysts, on average, expected net income of 89 cents a share, according to Thomson Reuters I/B/E/S.
Still, shares of CME were down 2.5 percent to $72.20 on the Nasdaq, on worries that trading volumes were back on a decline. CME exchanges handled an average of 10.9 million contracts each day last month, based on daily reports available on CME’s website. CME reports July trading volume on Friday.
“There’s always the argument that says the good news is past and the slowdown we’re seeing this month may mean we’re going to have earnings estimates that are weaker in this quarter,” said Brad Hintz, an analyst for Bernstein Research. “If you’re a short-term investor, that’s a hedge fund, you’re actually looking at the trading volumes day to day.”
Gill and other top executives have redoubled overseas sales efforts, focusing on energy trading as they visited London, Geneva, Shanghai and Tokyo on a recent trip.
CME Group is trying to attract new global customers to all three oil benchmark contracts, and Gill said the effort is paying off, citing a rise in trades of energy futures and options, among its most profitable contracts.
A pipeline of brokers in China is eager to sign on to CME Group as full members, he said, further boosting prospects overseas.
CME Group plans to open its first exchange abroad, in London, later this year.
A rise in payments from Brazilian strategic partner BM&F Bovespa boosted revenue as well, said Wells Fargo analyst Christopher Harris.

“NET POSITIVE”
CME Group is a frequent critic of increased regulation, but on Thursday’s earnings conference call, top executives suggested the company is benefiting from recent rule changes.
Regulator scrutiny of Wall Street’s trading in physical commodities, a major headache for some of its biggest customers, could be a “net positive” for the company if customers turn to futures markets to replace bets in the cash markets, CME Executive Chairman Terrence Duffy told analysts on the call.
New government mandates for clearing of over-the-counter swaps drove an increase in the company’s cleared swaps business. The volume of rates contracts tripled from the prior quarter to $41 billion in notional value each day, Gill said.
Daily volume so far this quarter has climbed to $62 billion, he said, as more asset managers, insurance companies and government-backed entities used the service.
Revenue rose to $816.1 million from $795.9 million a year earlier. Expenses fell to $308.3 million from $326.7 million.
CME ended the quarter with cash and marketable securities on hand of $2 billion. 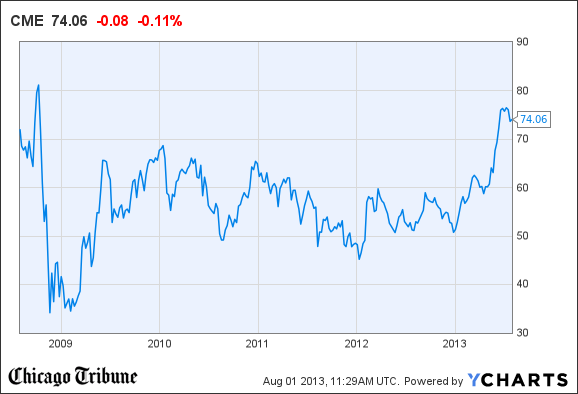 As Seen in the Chicago Tribune