From HotelNewsNow.com: STR: US hotel results for week ending 15 August

U.S. weekly hotel occupancy hit 50.0% for the first time since mid-March, according to the latest data from STR.

U.S. occupancy has risen week over week for 17 of the last 18 weeks, although growth in demand (room nights sold) has slowed. The week ending 14 March was the last with occupancy of at least 50.0%.
emphasis added

As STR noted, the occupancy rate has increased week-to-week in “17 of the last 18 weeks”. The increases in occupancy have slowed and are well below the level for this week last year of 72%. 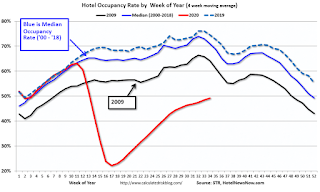 The leisure travel season usually peaks at the beginning of August (right now), and the occupancy rate typically declines sharply in the Fall.

With so many schools closed, the leisure travel season might be lasting longer this year than usual.