From the Fed: Industrial Production and Capacity Utilization

Total industrial production rose 3.0 percent in July after increasing 5.7 percent in June; even so, the index in July was 8.4 percent below its pre-pandemic February level. Manufacturing output continued to improve in July, rising 3.4 percent. Most major industries posted increases, though they were much smaller in magnitude than the advances recorded in June. The largest gain in July—28.3 percent—was registered by motor vehicles and parts; factory production elsewhere advanced 1.6 percent. Mining production rose 0.8 percent after decreasing for five consecutive months. The output of utilities increased 3.3 percent, as unusually warm temperatures increased the demand for air conditioning. At 100.2 percent of its 2012 average, the level of total industrial production was 8.2 percent lower in July than it was a year earlier. Capacity utilization for the industrial sector increased 2.1 percentage points in July to 70.6 percent, a rate that is 9.2 percentage points below its long-run (1972–2019) average but 6.4 percentage points above its low in April.
emphasis added 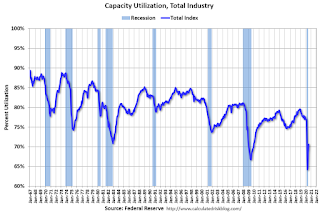 This graph shows Capacity Utilization. This series is up slightly from the record low set last month, and still below the trough of the Great Recession (the series starts in 1967). 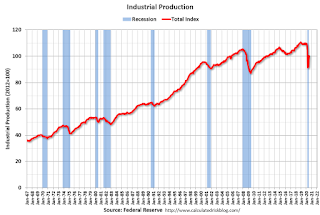 US retail sales regain pre-virus pace but slowdown is likely

Sweden’s GDP slumped 8.6% in Q2, more sharply than its neighbors despite its no-lockdown policy

Sweden's GDP slumped 8.6% in Q2, more sharply than its neighbors despite its no-lockdown policy