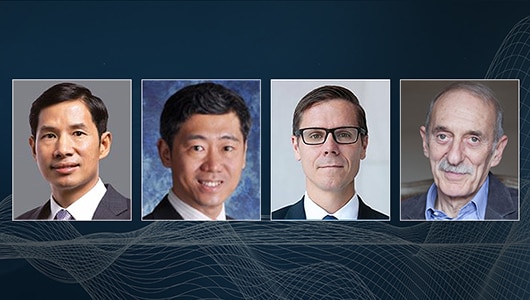 Will China’s recent regulatory tightening across sectors such as technology hurt its economic growth and case for investment? In a new Exchanges at Goldman Sachs episode, host Allison Nathan breaks down her latest Top of Mind report on the changes and speaks with four China watchers about their takes on this issue. Fred Hu, founder, chairman and CEO of Primavera Capital Group, and Professor David Li of Tsinghua University argue that the new rules will promote more sustainable long-term growth. “I believe very strongly that Chinese tech will weather the current rough storms,” Hu says. “Most of the Chinese tech companies will be able to adjust and adapt and, therefore, continue to achieve very strong growth…I think it would be a mistake to ignore the opportunities in China’s tech.” But Oxford’s George Magnus and CSIS’ Jude Blanchette see politics at work, especially in the run-up to next year’s 20th Party Congress. “I don’t think this is a momentary event where something has happened that’s made the government react, and then in six months’ time, it’ll revert and it’ll all be forgotten,” Magnus says. “This is pretty serious stuff. And it’s pretty serious stuff politically—which is a pointer, I think, to the way things will continue to evolve for the foreseeable future. And I think that should put us on edge, really. So caution would be the right watchword.”

Investors may be turning the page on the pandemic theme, as their focus shifts to local issues, reflation and fiscal uncertainty, according to the latest Marquee QuickPoll survey of 864 institutional investor clients. Key findings include:

Return to normal (for now). The COVID-19 pandemic was the single greatest source of risk for almost all financial markets over the last 18 months. But for the first time since September 2019, investors cited monetary policy as their biggest risk. Local drivers have become more prevalent for price action across the globe. In fact, most sentiment indicators show balanced readings, revealing that investors are comfortable with their level of risk.

Reflation winners evolve. With growth still on a solid footing (and the delta scare easing), most investors (26%) prefer U.S. cyclical stocks to express the reflation theme. European equities are also coming back into favor (17%), as investors ponder whether the focus on cyclicals and the delta easing will revive the European recovery trade.

Fiscal uncertainty. There continues to be speculation over what shape the reconciliation bill will take. The bill is currently being negotiated in the U.S. Congress, but investors are relatively optimistic: 51% say the final bill will have a positive impact on equity prices and only 18% expect a negative impact.

For more information about QuickPoll and Marquee, reach out to the team. 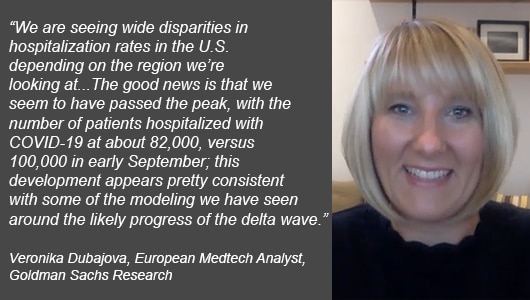 How are healthcare management teams describing their current operating environments?

Veronika Dubajova: There’s a lot of variability around the globe, depending on the progress of the pandemic. Overall, the picture is improving in Europe: Hospital occupancy rates due to COVID are at low enough levels that they’re enabling healthcare systems to operate fairly well at the moment. The healthcare system in the U.S., however, has been seeing sharply higher hospitalization rates due to the delta variant. But that pressure is regionalized, with higher hospitalization rates in the South—where vaccination rates are relatively low—and lower hospitalization rates in the North, where vaccination rates are higher. Outside of the U.S., we’re closely watching China, Japan and Australia. With China in particular, the concern is not due to rising COVID-19 cases, but rather due to the government typically focusing on containment through more extreme measures at the first sign of an outbreak. In Japan and Australia, elective procedures at hospitals have been relatively soft, although they are starting to firm up.

Veronika Dubajova: I mentioned we are seeing wide disparities in hospitalization rates in the U.S. depending on the region we’re looking at. For instance, at peak, almost 20% of all of the 100,000 patients hospitalized with COVID-19 were in Florida, reflecting the lower vaccination rate of that state. The good news is that we seem to have passed the peak, with the number of patients hospitalized with COVID-19 now at about 82,000, versus 100,000 in early September; this development appears pretty consistent with some of the modeling we have seen around the likely progress of the delta wave. Most of the medtech management teams at our conference believe the winter will be very manageable, but there are still a lot of unknowns, such as new variants and whether hospital operators can cope with the flu season at the same time.

There is also a backlog of delayed care and elective procedures that healthcare systems are trying to work their way through. In 2020, the industry lost about 15% to 20% of elective procedures and of course, that medical need hasn’t disappeared. As a result, we’re seeing increased investments into healthcare in select markets in the U.K. and also more broadly in Europe.

Where are vaccination rates headed and what should we watch next?

Veronika Dubajova: Overall, it’s a fairly successful story in Europe, where vaccination rates are exceeding 70% of the population in most of developed Europe and the U.K. In fact, there are a handful of countries in Europe, including Portugal and Spain, where vaccination rates now exceed 80%. One of the main economies that remains a laggard in spite of vaccines being widely available is the U.S., although there’s been decent progress recently due to the spread of the delta variant. Only 63% of the overall population in the U.S. has received at least one dose of the vaccine and only 53% has completed the vaccination course. As the last few months illustrate, the key thing to watch going forward—especially as we head into the winter season and if we see any new variants—will be vaccine coverage, not just nationally but also regionally, where regions with lower vaccine coverage will tend to see bigger outbreaks, all else being equal.

Much of the current focus is on whether booster shots will be needed. What have you learned from people in the health sector?

Veronika Dubajova: This has been a widely debated issue, and there are several important factors at play. On the one hand, we know the boosters work when it comes to increasing the antibody response. The key question, however, is whether or not boosters are actually needed, and there’s a lot of disagreement on this in the scientific community. We’ve seen countries like Israel start a booster campaign, but there’s still a lot of discussion around additional shots in the U.K. and the U.S. The question that will inform this decision is whether the decline in protection against COVID-19 that we have observed in recent months is truly a function of waning efficacy or rather related to something else, like new variants. At this point in time, the consensus seems to be that the vaccines’ supposedly declining protection likely has more to do with delta than waning efficacy, but we need more time and data to further assess this hypothesis.