January 22, 2021
Talks at GS with Dr. Raphael Bostic of the Atlanta Federal Reserve 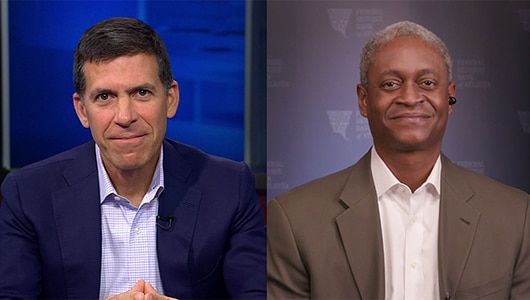 Above (L to R): John Waldron of Goldman Sachs and Dr. Raphael Bostic of the Atlanta Fed

In a nation riven by economic and racial inequality, Dr. Raphael Bostic, president and CEO of the Federal Reserve Bank of Atlanta, believes that central banks have a vital role to play in working towards a more inclusive economy. Understanding how Fed policies impact Americans in different ways is an important step, Bostic told Goldman Sachs President and COO John Waldron in a recent episode of Talks at GS. “When we cut interest rates, how fast do homeowners—white homeowners versus African American homeowners—move to refinance? And it turns out that African American and Hispanic homeowners refinance much slower, if at all, than white homeowners. So they’re not taking advantage of the policy as much,” he said. “That kind of research is incredibly useful to help us understand what’s going on and the areas where we need to inject ourselves to try to make things work better.” As the economy continues to recover from the pandemic, Dr. Bostic hopes that increased attention to issues around justice and equality will lead to advancements in the private sector, as well. “I’ve never in my lifetime heard so many business leaders talking about the issue,” he says. “I’m hopeful that awareness will translate into action and that that action will translate into progress.”

What can Americans expect from a Democratic-controlled White House and Congress? Goldman Sachs Research’s U.S. Political Economist Alec Phillips weighed in on the eve of the inauguration for the latest episode of the Exchanges at Goldman Sachs podcast. He expects Congress to approve a COVID-19 relief package by March if not sooner, though it’s unlikely to match President Biden’s $1.9 trillion proposal either by bipartisan or reconciliation channels. Tax changes also look likely, with any raises at the individual level likely to be channeled back into things like low- or middle-income cuts or restoring state and local deductions. On the corporate side, a net increase looks more likely, in Phillips’ view, but the narrow majority in Congress and a mounting deficit are key question marks. “The big question that we don’t know—and this will probably determine how much gets spent but also how much taxes rise—is how much they’re willing to add to the deficit, not for the near-term COVID relief…but for the bigger projects later in the year because ultimately if they don’t want to increase taxes by more than…an incremental amount…then that’s going to really limit how much they have to spend on other things,” Phillips says.

The Daily Check-In With Goldman Sachs 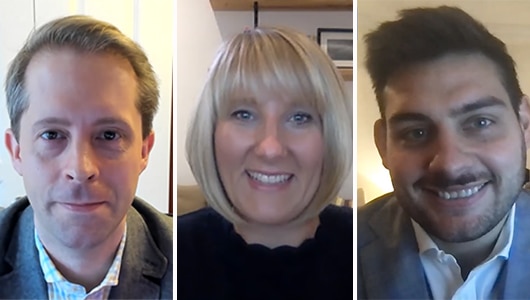 With a disappointing start to vaccination campaigns in many countries, Goldman Sachs Research now expects a somewhat slower rollout in the coming months than previously expected. “What we’re talking about is 10 billion shots in arms. And that’s a really, really significant logistical and manufacturing effort,” GS Research medtech analyst Veronika Dubajova says on a recent episode of The Daily Check-In. The downstream, logistical bottlenecks are proving the biggest challenges at present, she explains, in part due to the restrictions intended to reserve vaccines for those at the highest-risk. “We are starting with a very selective group. And sometimes the challenge of logistics is—if it’s a small, selected group—is getting enough of those people through the door in the limited amount of time that you have,” Dubajova says.

In another episode of The Daily Check-In, Goldman Sachs Research’s Stephen Grambling discusses the “combating forces” shaping the prospect of recovery in the gaming, lodging and leisure industries as the vaccine is more widely distributed. “You have the rise in COVID cases, fears around the new variant, rising cases that are also combined with restrictions, and then the vaccine, which is giving people hope,” Grambling explains. “We’re starting to see forward bookings start to solidify particularly on the leisure side of the space in the end of 2021 and also in 2022.”

Meanwhile, Louis Miller of the Global Markets Division shares how he is helping clients think about positioning for the risk of rising inflation. Not only do recent market indicators, such as the trade-weighted dollar and commodity indices, point to higher inflation, but longer-term trends, such as the prospect of greater fiscal stimulus and the Fed’s shift to a flexible inflation target, support higher prices. As a result, investors are looking beyond traditional growth stocks to more “value-oriented stocks that generate most of their value from today’s cash flows as opposed to cash flows 10 years from now,” he says, “because the real value of their debt will go down as inflation occurs.” 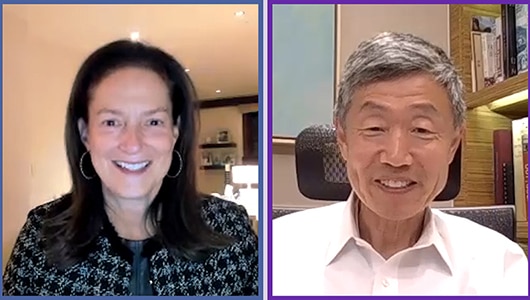 Above (L to R): Alison Mass of Goldman Sachs and Weijian Shan of PAG

As Weijian Shan, group chairman and CEO of PAG, reflects on his career, he says the key to his success has been investing in businesses with high barriers to entry. “You have to invest in businesses which have…competitive advantages that other people will not be able to imitate or to compete with. And that’s what we look at for every deal,” he tells Alison Mass, chairman of the Investment Banking Division, in the most recent episode of Insights From Great Investors. Shan points to his firm’s investment in Tencent Music Entertainment as an example. After a period of rampant piracy in China, copyright enforcement by the government had become “not only possible but almost a certainty.” With copyright ownership of 70% of the entire digital music market in China, Tencent was uniquely positioned to take advantage of that, Shan says.

Watch video
Briefly…on Takeaways From the Technology and Internet Conference 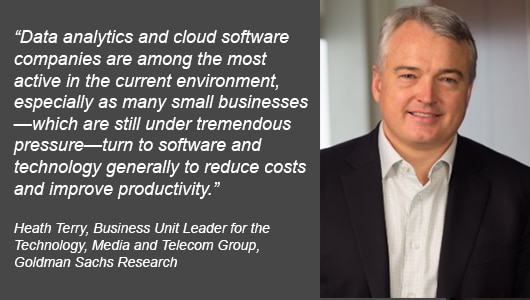 Goldman Sachs recently hosted the first day of its three-day virtual Technology and Internet Conference, which convened leaders from 75 companies in the space. We sat down with Goldman Sachs Research’s Heath Terry, business unit leader for the Technology, Media and Telecom Group, who shared highlights from the event. The second part of the conference will be held virtually on February 10-11.

Heath, can you describe the overall sentiment from the event?

Heath Terry: The optimism was fairly prevalent throughout the presentations and client conversations in large part because of improving sentiment around the eventual economic and pandemic recovery and, of course, the strong capital markets. The levels of market activity and many measures of business activity are, in fact, near record highs. Many of the newer companies that attended were either customers—or potential customers—of most of the public companies that were presenting at the conference. And many had recently gone public via initial public offerings or SPACs.

So, what’s driving the pickup in strategic activity in this sector?

Heath Terry: To understand the current underlying fundamentals, it’s helpful to look back to early in the pandemic—during the March to May period, for example—when companies were focused on ensuring that their businesses could continue as usual, while securing their data centers and helping their people work from home. Then, starting in June, many companies saw their customers pull back on discretionary spending given the uncertainty over the virus, elections and the economy. That cautiousness, however, reversed course during the fourth quarter amid encouraging vaccine developments while the stock market rallied, helping to bolster CEO, CIO and CFO sentiment. That’s when we saw companies sign new contracts, begin new cloud migrations and start to deploy their savings. So we really saw a renewed sense of optimism coming out of the fourth quarter and heading into 2021, especially given expectations of larger stimulus packages and a potential end to the pandemic.

What sectors are particularly active?

Heath Terry: Data analytics and cloud software companies are among the most active in the current environment, especially as many small businesses—which are still under tremendous pressure—turn to software and technology generally to reduce costs and improve productivity. One of the CEOs at the conference noted that while bank balances at small- and medium-sized businesses were down about 20% to 25% over year-ago levels—and down about 75% for companies in the most affected sectors—they were leveraging cloud software and software-as-a-service systems in data analytics to cut costs instead of building new data centers. So they’re turning to cloud services to save money in the short term.

How has remote work changed the landscape?

Heath Terry: It’s been a major area of technological development over the last year as companies scrambled to go from a world where a handful of their employees were working remotely to a world where nearly all of them are. That led to the acceleration of videoconferencing applications, but also the development of new tools as necessity forced invention. You’ve also seen companies that were slower to move out of on-premise data centers accelerate their move to cloud infrastructure or cloud hosted applications because they lost access to their physical infrastructure or tools. Interestingly, we’re now starting to seeing the second-order effect as companies change their real estate, recruiting and compensation strategies to reflect this new reality, so we’re only beginning to fully understand the changes to the landscape.