by Discovery Trading Group
in Commentary
0 0
0

There is a recurring great lesson to be reminded of on this one today. It’s why we always advocate against fixed tick risk/reward overlays especially for shorter term traders. The message is to always LISTEN to what the market IS doing and not try to shove the square peg of how many ticks you want to make in a linear fashion into the round hole of the ever changing volatility and cadence of the market. It’s no secret that vol is tight currently and the net effect of that tightness as usual is for the key structures which draw crowd actions to be grouped closer together. And while that tightness will often result in smaller requisite risk to the uncle point, it will also often limit the amount of available reward for that risk to the next structure above or below. 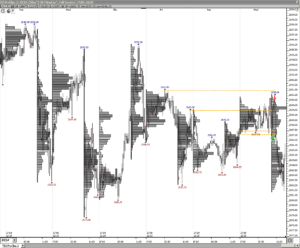 So with that here we see the retest of the Globex low and YC 87’s off the cash open. On the first push in light blue we saw the thin prints from top of book market makers pulling bid liquidity to goose it over the line and entice breakout sellers. But as you can see it just immediately petered out with shorts unwilling to hit into it. Note in the stats size leading out long into that push down against tepid net short retail. This was followed by a steep angle second push failure in dark blue with size leading the world out HARD with long aggression. Like I said earlier due to the tight vol it cost paper thin risk to the stop point for the longs to find out if that initial pressure to the upside would continue. As it turned out it did, at least as of this writing.

But this brings us to the reward side of the risk/reward overlay discussion. As I said earlier when vol is tight the structures will also often be tightly grouped together. And with that the next structure above was still based on the 12/22 RTH and Globex high 89’s & 91’s, which was what the current Globex high was tied to. Like clockwork as soon as that structure was retested from below we saw a huge wall of buyer absorption develop right on the case 89.50’s and through the current high retest in red. I can’t imagine being a long swinger from below and not scaling at least some of the position into that flow, especially given the current vol. I have no idea of course whether the rally will continue, but if it doesn’t longs from below will likely be kicking themselves for not sticking to their plan to execute structure to structure and peel off that two plus handle win for a handle or less of risk. EDIT: As it turned out longs from the 87’s would have been happy to scale into the 89-91’s retest. Of course you can see in the image here the massive relative absorption of buyers by passive and aggressive sellers on the first push back into the level. But this was subsequently followed by one final battle on a steep angle second push failure ending in buyers throwing in the towel and their puking fueling a move back to where we had just come from. So for those intraday swingers who were bearish then or on the day you could have found a similar op short from the 89-91’s looking for a first scale of roughly the same distance back into the 87’s structure, and perhaps on to the more major 82-84’s zone next below there. Remember, you can’t control what the market does next nor predict direction and distance trade by trade. All you can do is listen to the market and most importantly develop a repeatable process which naturally adapts to its behavioral changes…

Discovery Trading Group is a unique dojo focused on mentoring aspiring futures traders since 2010. It’s emphasis is on guidance in building bespoke processes and risk overlays rooted in market structure, price action and orderflow, with sound adaptable risk management as a priority.

The post Keeping Square Pegs Out of Round Holes… appeared first on Discovery Trading Group.

Chart of the Day: Is Good Data Good for Markets?