Global stocks are volatile as a protracted wait for the U.S. election looms 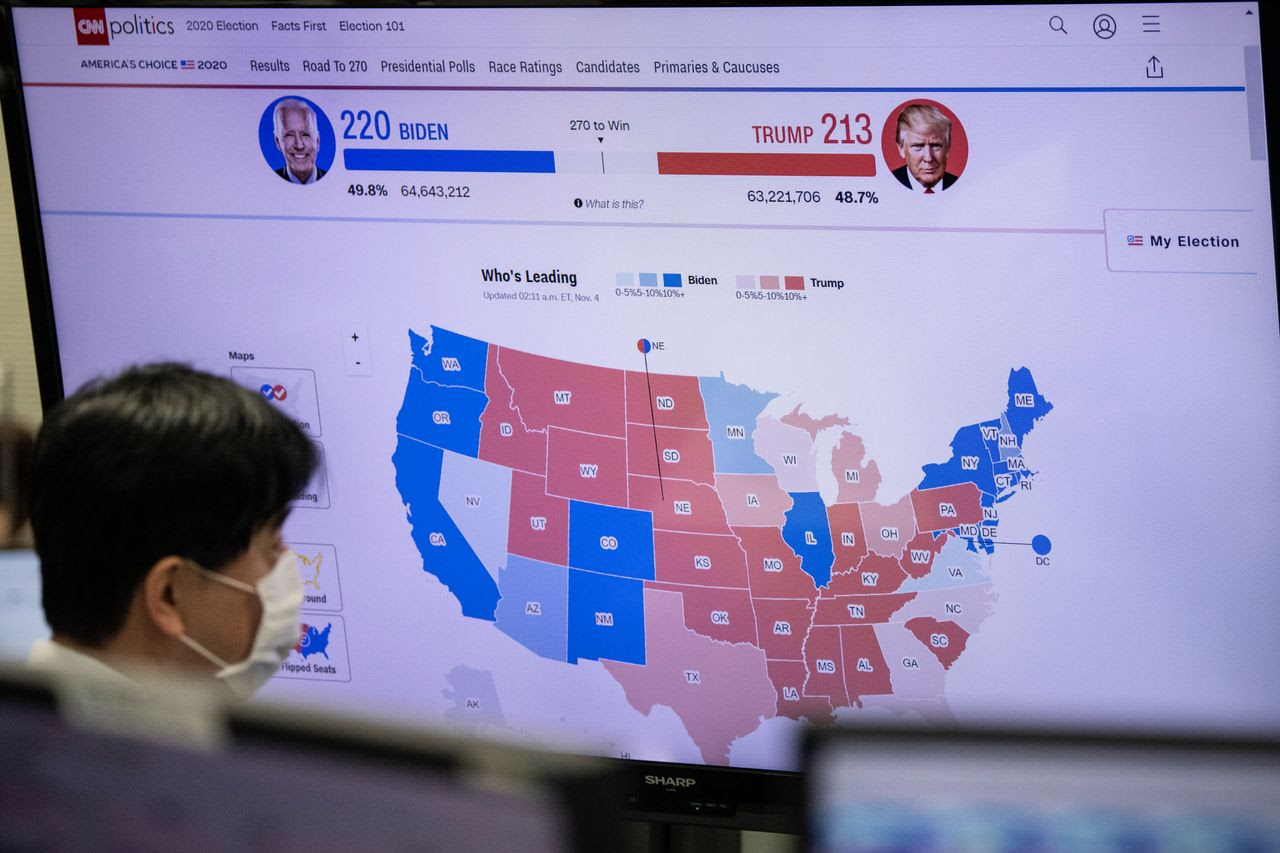 Global markets experienced choppy trading on Wednesday, as investors woke to a tighter-than-expected presidential race that could be days from an outcome. There were also threats of possible legal action over the election from President Donald Trump.

Dow futures fell as much as 400 points when Trump said in a speech that he believes he will win, and threatened to take the election to the Supreme Court, though he wasn’t specific over what kind of legal action he would take or what he was contesting.

The first of the big battleground states, Arizona, went to Biden, while Michigan, Wisconsin and Pennsylvania remain key states that are undecided with millions of votes to count. But despite indications from early polls in the lead-up to the election, the race has been tighter than expected, and the two candidates are now in a fight for key states.

Read: Biden leads Trump as control of the presidency and U.S. Senate are still in doubt

“A conclusive result could take a few days or more, potentially spurring market volatility and leaving open the possibility of a contested result,” said BlackRock Investment Institute, in a note to clients.

“We prefer to look through any volatility and stay with high-conviction positions amid any selloffs in risk assets. Likely low trading volumes in this period could magnify market moves,” said BlackRock.

BlackRock added that the outcome of the election will play out within fixed income and leadership for stock markets. Under a divided Biden government, long-term yields would be capped but over the longer-term face a challenge amid the possibility for higher inflation.

“We expect tech companies, the quality factor and large-caps to perform strongly under a divided government — as they have done in the past,” said the team. “We see challenges for EM [emerging markets] assets and global cyclicals in a second Trump term due to a possible resurgence in trade tensions.”

“This means a stimulus deal will have to clear a Republican Senate, where the current majority in the Senate has been the hold up,” said Creagh, in a note to clients. Investors are hoping for a stimulus deal to shore up the U.S. economy as coronavirus cases continue to climb across the country. That is as Europe also battles a second wave of the virus, with various lockdowns hitting several countries.

Democrats flipped one Senate seat as John Hickenlooper defeated Republican incumbent Cory Gardner in Colorado. But Republicans flipped one too, in Alabama. Other competitive Senate races had still not been called.

“It’s the Senate race that holds the most answers for risk assets as it will be crucial in determining the timing and size of another round of aid that the U.S. economy so desperately needs with benefit cliffs fast approaching,” said Creagh.

By the time the election is over, one-third of Americans could live in states with legalized recreational cannabis sales.

Supercar maker McLaren is taking on sportswear giants Nike NKE and Adidas XE:ADS with its own launch of high-end sportswear range.

Wealthy buyers are snapping up homes worth millions in London, sight unseen.

Redditors on things that will change forever because of the COVID-19 pandemic.

Ear wax will tell you just how stressed you are.