— Mortgage applications decreased 2.0 percent from one week earlier, according to data from the Mortgage Bankers Association’s (MBA) Weekly Mortgage Applications Survey for the week ending August 28, 2020.

“Both conventional and government refinancing activity decreased last week, despite 30-year fixed and 15-year fixed mortgage rates declining to near historical lows. Mortgage rates have remained below 3.5 percent for five months now, and it’s possible that refinance demand may be slowing and will not significantly increase again without another notable drop in rates,” said Joel Kan, MBA’s Associate Vice President of Economic and Industry Forecasting. “Purchase applications were essentially unchanged over the week and were 28 percent higher than a year ago – the 15th straight week of year-over-year increases. Lenders are reporting that the strong demand for homebuying is coming from delayed activity from the spring, as well as households seeking more space in less densely populated areas.”
…
The average contract interest rate for 30-year fixed-rate mortgages with conforming loan balances ($510,400 or less) decreased to 3.08 percent from 3.11 percent, with points decreasing to 0.36 from 0.38 (including the origination fee) for 80 percent loan-to-value ratio (LTV) loans.
emphasis added 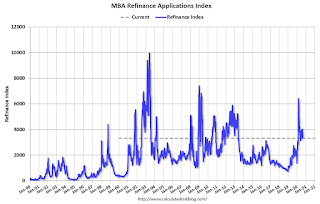 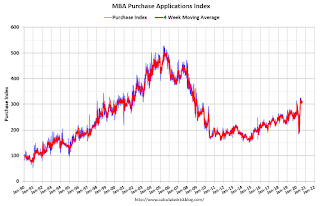 According to the MBA, purchase activity is up 28% year-over-year.