Mortgage applications decreased 4.8 percent from one week earlier, according to data from the Mortgage Bankers Association’s (MBA) Weekly Mortgage Applications Survey for the week ending September 25, 2020.

“Mortgage rates decreased last week, with the 30-year fixed rate mortgage declining 5 basis points to 3.05 percent – the lowest in MBA’s survey. Despite the decline in rates, refinances fell over 6 percent, driven by a 9 percent drop in conventional refinance applications,” said Joel Kan, MBA’s Associate Vice President of Economic and Industry Forecasting. “There are indications that refinance rates are not decreasing to the same extent as rates for home purchase loans, and that could explain last week’s decline in refinances. Many lenders are still operating at full capacity and working through operational challenges, ultimately limiting the number of applications they are able to accept.”

Added Kan, “Purchase applications also decreased last week, but activity was still at a strong year-overyear growth rate of 22 percent. Even as pent-up demand from earlier in the year wanes, there continues to be action in the higher price tiers, with the average loan balance remaining close to an all-time survey high.”
…
The average contract interest rate for 30-year fixed-rate mortgages with conforming loan balances ($510,400 or less) decreased to 3.05 percent from 3.10 percent, with points increasing to 0.52 from 0.46 (including the origination fee) for 80 percent loan-to-value ratio (LTV) loans.
emphasis added 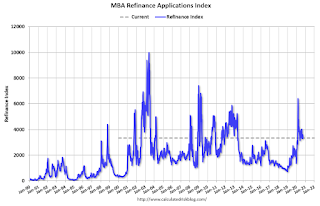 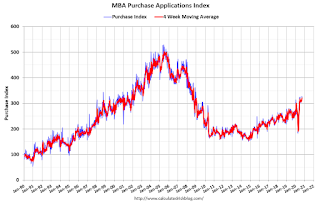 According to the MBA, purchase activity is up 22% year-over-year unadjusted.