Mortgage applications increased 2.9 percent from one week earlier, according to data from the Mortgage Bankers Association’s (MBA) Weekly Mortgage Applications Survey for the week ending September 4, 2020. This week’s results are being compared to the week of Labor Day 2019.

“Mortgage rates declined last week, with a noteworthy 5-basis-point decrease in the 15-year fixed rate to a new record low of 2.62 percent. The drop in rates led to a rebound in refinancing activity, driven mainly by borrowers applying for conventional loans,” said Joel Kan, MBA’s Associate Vice President of Economic and Industry Forecasting. “Purchase applications were 40 percent higher than the same week last year, but the increase is skewed higher by being compared to Labor Day 2019. Nevertheless, there continues to be resiliency in the purchase market. Applications were up almost 3 percent on a weekly basis and the average loan size continued to increase, hitting a survey high at $368,600.”
…
The average contract interest rate for 30-year fixed-rate mortgages with conforming loan balances ($510,400 or less) decreased to 3.07 percent from 3.08 percent, with points remaining unchanged at 0.36 (including the origination fee) for 80 percent loan-to-value ratio (LTV) loans.
emphasis added 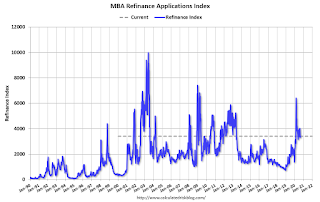 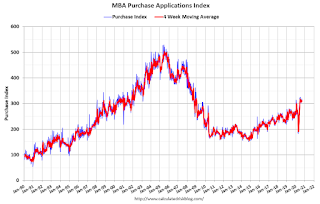 According to the MBA, purchase activity is up 40% year-over-year unadjusted (this is a comparison to a holiday week last year).

Editorial: NM lawmakers, not cities, should decide where, when guns OK